On June 25, Canadian Prime Minister Stephen Harper welcomes the Group of Eight (G8) to Muskoka, Ontario. Two days later, the action shifts to Toronto, where he convenes the Group of Twenty (G20). Together, the two events symbolize an epochal shift--from an era of Western dominance to a new, multipolar age.

What can leaders accomplish that might justify the $1 billion price tag? And just how many summit groupings does the world need?

First, a bit of context. The G8 was born in 1998, when Russia joined the G7 club. The following year, Treasury Secretary Larry Summers sponsored the creation of a "finance G20," with representatives from twenty pivotal economies. In November 2008, President George W. Bush elevated that forum to prime time, convening an emergency summit of G20 leaders in Washington, DC, at the depth of the financial crisis.

G20 leaders launched a massive policy intervention that saved the world from depression. Indeed, the creation of the G20 is the biggest single innovation in global governance since the end of the Cold War. It is the only international forum in which major developed and developing players meet in formal equality at the highest level of government. It thus stands in contrast with the two-tiered UN Security Council, the weighted voting of the Bretton Woods institutions, or the more restricted G8.

When President Obama declared the G20 to be the "premier forum for international economic cooperation" in September 2009, the G8 seemed destined for obscurity. But in fact the United States and several other countries remain attached to the G8 as a forum for addressing matters of peace, security, and global development.

This lingering nostalgia is partly a function of size. The G20 has proven more cumbersome than the G8. Identity is also a factor. Ignoring the presence of authoritarian Russia, the G8 is composed of advanced market democracies. This makes it more tractable than the diverse G20, which includes more authoritarian states (like China and Saudi Arabia) as well as independent-minded democracies (such as Brazil and South Africa). Finally, U.S. officials have been reluctant to saddle the G20 with the G8’s entire agenda, for fear of diluting its immediate priority: rescuing the world economy.

What They Hope to Accomplish: the G8 and G20 Agendas

This week’s summit agendas reflect this division of labor. At Muskoka, the G8 will focus on global development, donor accountability, and international security.

Of course, the world has heard similar promises announced with great fanfare at previous summits, on which the G8 has failed to deliver. A case in point is the G8’s sorry performance on its 2005 Gleneagles pledge to increase total foreign aid by $50 billion--a target it missed by $18 billion. Hoping to improve follow-through and reduce cynicism, Harper has made G8 "accountability" a central theme at Muskoka.

Finally, G8 leaders will address several sensitive security items. These include the growing nuclear challenges posed by Iran and North Korea and the future of the G8’s Global Partnership against the Spread of Weapons and Materials of Mass Destruction. Finally, the G8 will propose national and multilateral steps to bolster the world’s fragile states and to improve counterterrorism cooperation.

The G20 has shown great resolve as a global crisis committee. But this "fellowship of the lifeboat" is proving hard to sustain as the crisis ebbs.

The immediate stakes in Toronto will be even higher. The G20 has shown great resolve as a global crisis committee. But this "fellowship of the lifeboat" is proving hard to sustain as the crisis ebbs. To become an enduring steering committee for the world economy, the G20 must complete several legacy tasks. These constitute the heart of the Toronto agenda:

First, putting the world on a trajectory to stable recovery requires closely coordinating macroeconomic policies, harmonizing exit strategies from stimulus plans, and correcting longstanding imbalances between surplus and deficit countries. None of this will be easy. Exit strategies are inherently national decisions, and while G20 members have agreed to submit recovery plans to a new "peer review" process, there are no mechanisms to ensure that countries take these seriously. G20 members also remain divided on the relative responsibilities of surplus countries (namely China, Germany, and Japan) and deficit countries (such as the United States). Greece’s debt crisis and the resulting eurozone turbulence have sharpened the call to rein in deficits, but precipitous moves could endanger global recovery.

Second, the G20 must agree on a new regime for global financial regulation capable of reducing systemic risk and policing the cross-border activities of major financial institutions. G20 members need to harmonize national regulatory approaches and bolster the capacity of the new Financial Stability Board to address global vulnerabilities. G20 finance ministers have committed to seek common prudential standards by late 2010. Unfortunately, some of the biggest players remain divided on the proper scope of regulation of cross-border financial institutions. In the absence of consensus, individual countries, including the United States and Germany, have taken unilateral regulatory steps. 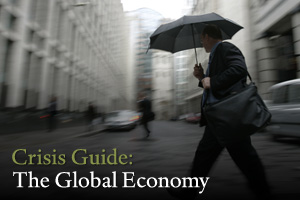 Third, the G20 must continue to push for reform of the international financial institutions, particularly the International Monetary Fund (IMF) and World Bank. The G20 needs to implement agreements to adjust the voting weights within the IMF, clarify its relationship to the governing boards of the Fund and the Bank, and push forward other governance reforms of both institutions in favor of emerging economies.

What Roles for the G8 and G20? The Road Ahead

In the short term, the G20 will remain only one of a number of "minilateral" fora. Over the longer term, however, the G20 will inevitably expand its agenda, cementing its role as the most influential hub among the world’s most powerful countries. To date, President Obama and other G20 leaders have resisted any such "mission creep." But as the global economy recovers, G20 leaders are likely to broaden their horizons through a mixture of rational deliberation and reaction to unanticipated global crises.

Development, climate, and security issues seem destined to migrate from the G8 to the G20. Western donors may dominate official aid flows, but new, nontraditional donors like China and India are increasingly important. Bringing emerging powers into the conversation could help socialize rising states to established norms of development cooperation--and shift the global development dialog away from Western welfare toward policy instruments like trade liberalization, technology transfer, migration, and foreign investment. Similarly, any progress on global warming will require bargains hammered out among G20 nations.

Finally, the G20 will surely expand its ambit to cooperation on global security, including issues of nonproliferation, terrorism, and transnational crime. Major breakthroughs on global security challenges cannot be achieved in a cozy boardroom of like-minded Western states. All the big players need to be present, regardless of their regime type or level of development.

From the U.S. perspective, the G20 has the potential to transform world politics in at least four positive ways. First, it promises to temper--and perhaps erode--some of the destructive bloc dynamics that exist in the United Nations. Second, it offers a framework to encourage emerging powers to accept new responsibilities. Third, it promises to give existing organizations like the United Nations some healthy competition. And fourth, it portends a more fluid negotiating environment, in which the United States has the greatest room to maneuver.

To fulfill this long-term potential, the G20 will first need to consolidate its impressive achievements to date--beginning this week in Canada.