In the end, the only significant achievement of the first meeting between Indian prime minister Manmohan Singh and his Pakistani counterpart Nawaz Sharif was that it happened at all. Just ahead of their talks at the UN in late September, violence surged along their countries’ border, giving way to last-minute rhetorical sparring. The talks failed to yield even a commitment to restart a regular series of diplomatic exchanges known as the "composite dialogue," which has made small steps toward normalized Indo-Pakistani relations in recent years.

No one doubts Singh’s sincere desire to end the long hostility between India and Pakistan. During nearly a decade in office, Singh has on occasion edged far closer to a breakthrough deal with Islamabad than he stands today. In 2007, for example, secret "back-channel" talks seemed close to delivering a Kashmir compromise that Singh and Pakistan’s then president Musharraf would have had a chance to sell to their people. Musharraf’s spectacular political collapse killed that process. Cross-border violence—especially the 2008 terrorist attacks in Mumbai—has kept the coffin nailed ever since.

Today there are more reasons to anticipate further backsliding in relations than to expect progress. As they have for decades, the two sides stare warily across their shared fortified border, play spy-versus-spy games throughout the region, and build their arsenals—including nuclear weapons—in preparation for war. Bilateral trade, investment, and travel remain artificially constrained by politics.

Because normal bilateral relations would serve the interests of leaders in both New Delhi and Islamabad, there is at least a glimmer of hope.

In many ways, however, both countries now have bigger fish to fry, starting with the need for economic growth to pull their massive and fast-growing populations from poverty. Because normal bilateral relations would serve the interests of leaders in both New Delhi and Islamabad, there is at least a glimmer of hope for the medium-term future.

Singh, eighty-one, is now an increasingly frail and embattled politician. He is widely expected to retire from leadership after the spring 2014 national elections, no matter how his party fares at the polls. As his term winds down, his government has been engulfed by corruption scandals, his country by a disheartening economic downturn, and his Indian National Congress party by acts of high-profile indiscipline.

In Islamabad, Singh also has an uncertain partner for peace. Prime Minister Nawaz Sharif, re-elected in May after years in opposition and exile, says he favors deal-making with India. That claim has some basis in past history, since Sharif did engage in high-stakes diplomacy with India the last time he held power. In 1999, the two sides signed the Lahore Declaration, a treaty intended to cool tensions after both sides had conducted nuclear tests the preceding year.

At present, however, Pakistan’s domestic security and economic challenges make India’s look easy. And as Sharif has learned from bitter experience, when it comes to dealing with India and other core national security issues, that he cannot take for granted his freedom to negotiate without bringing the powerful military onboard. For the time being, that, too, is complicated; Pakistan’s top general, Army Chief Ashfaq Parvez Kayani, is just about to turn over his baton to an as-yet unnamed successor at the end of November. Periods of military succession have historically been politically hazardous ones in Pakistan. Sharif can be forgiven for moving cautiously on India.

In short, only a minor miracle would enable Singh to leave office next spring garlanded as a peacemaker. More likely is that Singh’s departure will be followed by an even rockier period of Indo-Pakistani relations.

There are good reasons to fear that Singh’s successors will not be nearly as statesmanlike as he has been. The dynastic heir to Congress party leadership, Rahul Gandhi, has no real diplomatic experience. And India’s opposition leader, Narendra Modi, is best known outside India for having presided as Chief Minister of Gujarat state during the brutal Hindu-Muslim violence of 2002. Not surprisingly, Modi’s recent comments on Pakistan are more hawkish than Singh’s.

On the Pakistani side, if the incoming army chief follows the pattern of his recent predecessors, relations with India will again suffer setbacks. Although Generals Musharraf and Kayani eventually came around to supporting the peace process, both were also disruptive forces in their early years. Musharraf’s 1999 military adventure (the Kargil War) was a violent reversal after the Lahore Declaration, and in 2008 Kayani refused to endorse the efforts of Musharraf’s back-channel negotiator, despite clear interest in New Delhi, which sapped that process of momentum. Pakistan’s next army chief could also take a hard line with New Delhi either to establish his nationalist credentials or because he believes the time is not ripe for delivering any concessions.

Recent cross-border incidents also show that the Indo-Pakistani relationship remains all too easily taken hostage by spoilers. Pakistani-based terrorists, and especially Lashkar-e-Taiba (LeT), have every interest in escalating the violence to provoke warlike words, if not yet actions, by New Delhi and thereby buttress their claims that India is implacably hostile. That LeT’s leader, Hafiz Saeed, is permitted to preach openly in Pakistan’s major cities is in itself a dangerous provocation.

The case of Hafiz Saeed also points to more fundamental problems: Pakistan’s leaders have not yet signaled a firm commitment to ending their state’s longstanding strategy of using proxy forces to attack India directly or indirectly. As large numbers of U.S. troops withdraw from nearby Afghanistan, Indians are right to fear a replay of the 1990s, when Pakistani terrorists used Afghan territory as a launching pad and safe haven for plots against India. Pakistan, for its part, fears the specter of Indian encirclement behind every friendly gesture New Delhi makes to Kabul. The 2014 political and military transition in Afghanistan is thus likely to spark Indo-Pakistani tensions as the two sides jockey for position in a post-NATO Kabul.

To be sure, there have always been important reasons to doubt that differences between Islamabad and New Delhi could be fully resolved. Pakistan seeks to revise the way borders were drawn after the partition of British India, while India will never yield territorial concessions. Pakistan, like many other second-fiddle states, rejects the hegemonic pretensions of its larger regional neighbor, while a growing India aims for a seat at the table of the world’s great powers. Generals on either side of the border claim they must gird themselves against their adversary’s military capabilities, including nuclear weapons. 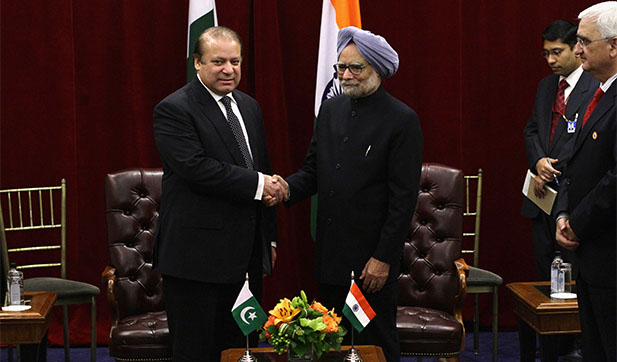 For all of these reasons, Indo-Pakistani peace is not close at hand. That said, unlikely dealmakers—like Musharraf, or Singh’s predecessor, Atal Bihari Vajpayee—have landed at the negotiating table in the recent past less because of who they were than because of the conditions they faced. The chief condition behind such optimism has to do with relations between Beijing and Washington. Although U.S. and Chinese interests are not perfectly aligned in South Asia, the region’s two most important external powers do favor peace and stability between India and Pakistan. In times of crisis, especially, the joint influence of Beijing and Washington has helped to calm tension. On other occasions, top Chinese officials have reportedly urged their Pakistani counterparts to pursue a settlement with India.

The region’s two most important external powers do favor peace and stability between India and Pakistan.

Within the region, many business leaders also anticipate huge opportunities from normalization, from access to new markets and cheaper material inputs to new pools of labor. There would, of course, be winners and losers from any economic opening, but the artificial barriers between India and Pakistan impose a net cost on both sides.

Finally, many top strategic thinkers in Islamabad and New Delhi appreciate that normalization serves their national purposes better than other realistic alternatives. For Pakistan, the immediate threat posed by the internal violence of insurgents, sectarian groups, and organized criminals demands the full attention of the state’s security apparatus. In that context, conflict with India must, at the very least, be put on the back burner.

For India, the lingering conflict with Pakistan is a drag on the high levels of economic growth required to move the country along the path to development. Moreover, India has no good military solution to Pakistan. Punitive military strikes cannot end the terrorist threat. More aggressive strikes would threaten escalation to a nuclear standoff. The bloodletting of a full-scale war would set both nations back by a generation or more.

In sum, politics and personalities will likely put a hold on Indo-Pakistani progress in the near term. Fundamental differences render true peace a distant proposition. Yet there is reason to hope that Indo-Pakistani "normalization," meaning reduced cross-border violence and expanded trade, transit, and investment—if not a full resolution of underlying territorial and political disputes—are reasonable medium-term goals even if the current crop of leaders is not personally predisposed to seek peace.

Dan Markey is the author of No Exit from Pakistan: America’s Tortured Relationship with Islamabad.