The annual commemoration of the end of World War II is a bittersweet moment for Koreans that highlights the complexity of South Korea’s relationship with Japan. While the August 15, 1945, announcement by the emperor of Japan conceding defeat to allied forces brought euphoria across the Korean peninsula, it also marked the beginning of the country’s division and control by occupying forces from the United States and the Soviet Union.

Excitement over Korean liberation from Japanese colonial rule (officially called the “restoration of light” in the South) all too quickly yielded to temporary division and two separate occupations of North and South Korea. What followed was a civil war fed by Cold War confrontation, and an armistice devised as a temporary halt to fighting that has lasted over six decades. 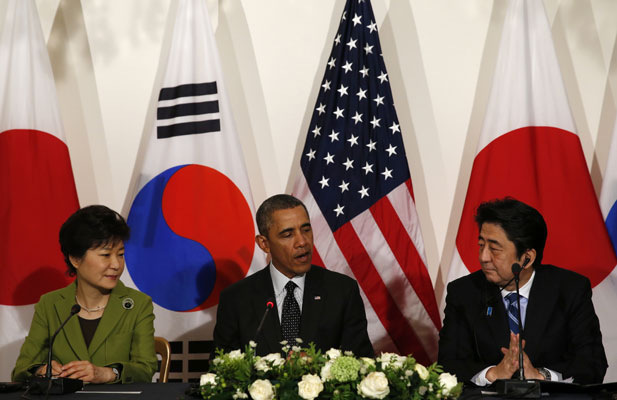 The rush from liberation to occupation to civil war in less than five years delayed and complicated many tasks associated with the resolution of Japan’s colonial rule over Korea. The urgency to respond to North Korea’s invasion and the UN-authorized “police action” in late June of 1950 occurred prior to the San Francisco Peace Treaty. At the time, Gen. Douglas MacArthur directed the Korean War effort from command headquarters in Tokyo.

During much of the post-WWII era, the respective Korean and Japanese alliances with the United States and the strategic imperative for alliance-based cooperation has enabled formal cooperation despite incomplete healing from the colonial past. The challenge going forward is whether Japanese and South Korean leaders can show the statesmanship necessary to bring an end to lingering tensions and open the door to a truly future-oriented Japan–South Korea friendship.

The road to reconciliation

At the outset of the Korean War, South Korean President Syngman Rhee displayed considerable ill will toward Japan. Despite South Korea’s dependency on war materiel flowing through Japan, Rhee declared a sixty-mile maritime sovereignty zone around the Korean peninsula and imprisoned over a thousand Japanese fishermen for violating it, stalling prospects for productive negotiations between the two countries. 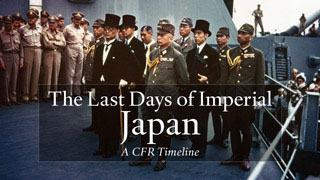 Not until after Rhee left the scene in 1960 would serious efforts resume to normalize Japan–South Korea diplomatic relations. Such efforts were strongly supported by the United States as the fight against communism spread to Southeast Asia. They occurred against the backdrop of the authoritarian Park Chung-hee government’s need for economic support to launch a meaningful post-Korean War recovery. Although it was the subject of bitter public protest in South Korea at the time, the 1965 Japan-South Korea Treaty on Diplomatic Normalization provided a legal basis for cooperation on settlement of claims and was accompanied by more than $845 million in economic loans, grants-in-aid, and property claims.

Following South Korea’s democratic transition in the late 1980s, the challenge of managing Japan-South Korea relations has arguably become even more difficult for both governments. South Korean democratization has made it necessary for Japan to convince both the Korean government and its public of the sincerity of its efforts to achieve historical reconciliation.

The first test came in the early 1990s over the issue of “comfort women,” who had been coerced to provide sexual services for the Japanese military during World War II. Based on extensive consultations, Tokyo acknowledged the suffering of these women and provided compensation to them through the Asian Women’s Fund, a nongovernmental organization. However, Seoul discouraged Korean victims from taking the funds because they were provided by an intermediary organization and not directly from the Japanese government. Tokyo also issued two statements of apology in the 1990s regarding Japan’s colonial past, the 1993 Kono (named for Chief Cabinet Secretary Yohei Kono) and 1995 Murayama (named for Prime Minister Tomiichi Murayama) statements. The South Korean government has come to see them as essential statements of Japanese policy that support historical reconciliation.

A major step forward for relations came in 1998 when President Kim Dae Jung and Prime Minister Keizo Obuchi signed the Joint Declaration of a New Japan-Republic of Korea Partnership Towards the Twenty-First Century. In this statement, Obuchi expressed “deep remorse” and “heartfelt apology” for Japan’s colonial rule. Kim expressed acceptance and appreciation for Obuchi’s statement, and both leaders shared the view that to build a “future-oriented relationship,” it was important that “both countries squarely face the past and develop relations based on mutual understanding and trust.” This statement paved the way for expanded cultural and people-to-people exchanges as well as deepened political and security consultations between the two governments. These developments were also welcomed by the United States and enabled the establishment of a high-level coordination mechanism among the three governments on policy toward North Korea, known as the Trilateral Coordination and Oversight Group (TCOG).

But despite the expanded opportunities and rationales for cooperation, a series of chronic issues have emerged since 2000 that have hamstrung development of the Japan-South Korea relationship, inhibiting stable relations, and resulting in a cycle of rupture and rapprochement. South Korean public objections to Japanese government handling of school textbook issues, disputes over whether the Japanese military was complicit in coercion of comfort women or forced labor during the war, visits by the prime minister to the Yasukuni Shrine, where some deceased men convicted of war crimes are registered, and Japan’s claims to the disputed Dokdo/Takeshima island located between mainland Korea and Japan in the Sea of Japan (East Sea), periodically inflame Korean public opinion and constrain government options in handling relations with Japan. The TCOG process broke down in the mid-2000s as a result of diverging Japanese and South Korean priorities in the context of Six Party Talks on North Korea’s denuclearization.

With the near-simultaneous elections of Prime Minister Abe and President Park Geun-hye in December of 2012, the Japan–South Korea relationship went from bad to worse.

With the near simultaneous elections of Prime Minister Abe and President Park Geun-hye in December of 2012, the relationship went from bad to worse. During her campaign, Park Geun-hye pointed to the need for China, Japan, and South Korea to have a “correct understanding of history” to overcome the “Asian paradox“ of economic growth threatened by underlying security dilemmas.

Meanwhile, the return of Shinzo Abe as Japan’s prime minister was greeted with suspicion in South Korea due to his reputation as a historical revisionist. Park prioritized relations with China prior to her February 2013 inauguration, while Abe’s emissary to Park’s inauguration, Finance Minister Taro Aso, left a poor impression that was made worse by his leadership the following May of a large official delegation to pay respects at the Yasukuni Shrine. Separately, U.S. President Barack Obama’s administration grew increasingly frustrated that its rebalancing strategy to Asia was being inhibited by poor relations between its two closest allies in Northeast Asia. Abe’s own visit to Yasukuni Shrine in December 2013 seemed to confirm South Korean suspicions about Abe’s revisionism, but it also catalyzed a U.S. effort to get relations with its two allies back on track.

In early 2014, the United States worked behind the scenes to bring Abe and Park together for trilateral summit meeting on the sidelines of the March nuclear security summit at The Hague. A South Korean prerequisite for such a meeting was that Abe publicly pledged to uphold the Kono and Muruyama statements expressing Japan’s apology for colonial aggression as its official policy. But alongside this pledge, Japan’s ruling Liberal Democratic Party also launched an internal review of the Kono Statement that many observers saw as an attempt to discredit its validity. A committee report released in June 2014 revealed background issues surrounding the statement, including classified consultations between the governments of Japan and South Korea on comfort-women related issues. The Abe administration has continued to affirm the statement, most recently during a joint press conference with Obama at the White House during Abe’s April 2015 state visit to Washington.

The result of the Hague trilateral summit was an agreement between the Japan and South Korean governments to hold director-general-level meetings on how to deal with the issue of comfort women, an issue that Park Geun-hye had previously made the main prerequisite for improved relations.

In the spring 2015, South Korea and Japan held a series of cabinet-level meetings among economic, defense, and foreign ministers, culminating in a set of parallel receptions in respective embassies in Tokyo and Seoul that Abe and Park both attended. At the South Korean embassy reception in Tokyo, Abe spoke of “strategic interests” that bind the two countries. Park, speaking from Seoul, emphasized the “necessity to free ourselves from the heavy burden of history, our greatest single impediment.”

Once bilateral relations at the leadership level are restored, the question then is whether the two leaders can bring along public support for a transformed Japan–South Korea relationship that addresses history adequately.

Park’s focus on the need for historical reconciliation reflects the dominant South Korean media narrative, which during this seventieth anniversary of the end of WWII has consumed itself for months with speculation regarding the scale, level, and wording of Abe’s anniversary statement. Speculation was especially intense in South Korean parsing of Abe’s address to a joint session of the U.S. Congress in April 2015. Ever-sensitive to Abe’s possible revisionism, the South Korean media will examine whether his statement measures up to the fiftieth and sixtieth anniversary statements of his predecessors and whether he will use the words “apology,” “aggression,” and “colonial rule.”

Abe’s statement will influence the tone for relations in the coming months, but it will not be the only factor shaping the prospects for ties. Park’s speech on the anniversary will also be important. Likewise, China’s assessment of Abe’s speech will determine whether it will be possible to hold a trilateral China-Japan–South Korea summit meeting later this year in Seoul. That meeting would likely be the occasion for the first Abe-Park bilateral summit. Once relations at the leadership level are restored, the question then is whether the two leaders can bring along public support for a transformed Japan-South Korea relationship that addresses history adequately and attempts to build a new partnership on the spirit of the 1998 Kim-Obuchi Joint Declaration or whether the relationship will remain hobbled by differences over how to remember the past.