Can international law protect global health from a man-made menace? The World Health Organization (WHO) certainly thought so in adopting the Framework Convention for Tobacco Control (FCTC), which entered into force on February 27, 2005.

More From Our Experts
Jennifer Nuzzo
Visualizing 2021: Trends to Watch

Supporters hailed the FCTC as a critical tool for international tobacco control and as a bold new model for using international law on other global health problems. Calls for more treaties followed on topics as wide ranging as excessive alcohol consumption, antibiotic resistance, counterfeit medicines, and corruption in health systems.

A decade later, the FCTC has been ratified by 180 countries representing nearly 90 percent of the world’s population. It is a qualified success for improving tobacco control. Yet the reasons for its success are unlikely to be replicated for other global health threats, and the convention offers lessons on the limits of improving global health through international law. 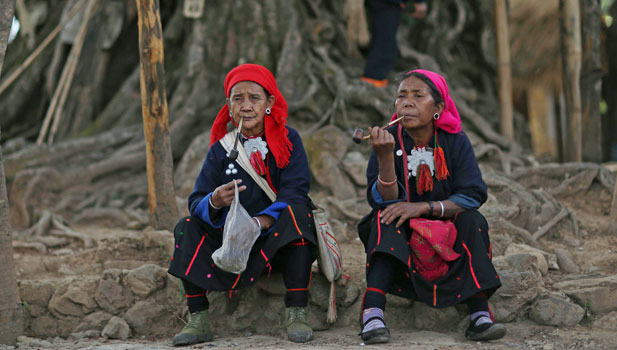 Despite claims to the contrary, the FCTC is not the world’s first public health treaty. It is not even the WHO’s first treaty nor the first international agreement on reducing noncommunicable diseases (NCDs). Between 1851 and 1950, states concluded dozens of treaties to limit transboundary pollution and trade and smuggling of alcohol and opium. In 1952, the WHO negotiated the International Sanitary Regulations, a binding treaty which later became the International Health Regulations, the rules that govern the public health response to pandemics and other emergencies of international concern.

The FCTC’s novelty is specific to the WHO. It is the first convention that the WHO has concluded, which requires the approval of two thirds of the WHO member countries before adoption can occur. Perhaps more importantly, it is also the first time the WHO managed to issue binding restrictions on a deep-pocketed industry whose products have devastating health consequences for the world’s poor. In the 1980s, the WHO attempted to regulate advertising of breast-milk substitute, but failed in the face of industry and developed-country opposition. For decades, the WHO’s efforts on tobacco had been equally unsuccessful.

More From Our Experts
Jennifer Nuzzo
Visualizing 2021: Trends to Watch

Between 1970 and 1998, the WHO passed one resolution after another on curbing tobacco consumption, to little avail. Cigarette companies continued to expand into developing countries, where tobacco consumption tripled. Calls for a binding tobacco treaty in 1995 went nowhere as tobacco-related deaths rose to four million per year, increasingly in poorer nations. Upon becoming WHO director-general in 1998, Gro Harlem Brundtland made a binding tobacco treaty a priority. Four years of negotiations produced the FCTC in 2003, which entered into force two years later.

Three factors contributed to the WHO’s adoption of the FCTC. The first was Brundtland’s leadership. As a former prime minister, physician, and public health professional, she was a formidable director-general, with vast political and diplomatic experience, including chairing the UN World Commission on Environment and Development. Her commitment was instrumental to the FCTC’s successful negotiation.

Second, tobacco politics shifted as the WHO began to push the FCTC. In 1998, the five largest U.S. tobacco companies settled a lawsuit with forty-six U.S. states by agreeing to pay $206 billion in fines and release decades of internal documents. These files revealed systematic industry deception and malfeasance, including efforts to undermine the WHO. The tobacco industry became a global pariah, strengthening interest in the FCTC and undermining the industry’s attempts to kill it.

"[It is] the first time the WHO managed to issue binding restrictions on a deep-pocketed industry whose products have devastating health consequences for the world’s poor."

Third, the FCTC’s design and content eased its adoption. States have long used treaties to mandate cooperation on transboundary health threats, including the spread of infectious diseases, trade in hazardous substances, and air and water pollution. Importantly, the FCTC makes few demands on parties to address international aspects of tobacco control. It contains no obligations concerning licit international trade and investment, cross-border advertising, assistance for developing countries, or strong dispute settlement. The FCTC requires parties to monitor and prevent illicit trade in tobacco products within their territories, with a promise to consider a protocol on international cooperation on cigarette smuggling at a later date.

Instead, the FCTC’s binding provisions focus on domestic tobacco control measures that were effective, but did not require a treaty for countries to implement. On reducing the demand for tobacco product, the FCTC requires countries to implement bans on smoking in public places and restrictions on tobacco advertising and labeling. The FCTC only encourages, rather than mandate, parties to implement the most effective demand reduction strategy—raising taxes on tobacco products. On reducing the supply of tobacco, the FCTC requires banning sales to minors, cracking down on smuggling, and urging crop substitution.

This domestic focus diminished opposition from developed countries, most of which had long before implemented the tobacco control measures included in the FCTC. Excluding trade and obligations to provide tobacco-control funding to developing countries further reduced the treaty’s potential burden on developed countries and eased its passage. Meanwhile, developing-country health officials insisted on the inclusion of the FCTC’s binding domestic requirements, as means for overcoming opposition from the more powerful agriculture, commerce, and finance ministries within their governments to effective tobacco control laws. With the interests of developed and developing countries accommodated, the FCTC was widely ratified.

It’s Not All About the Treaty

Yet widespread ratification is often a poor indicator of a treaty’s effectiveness. Three years after entering into force, the FCTC had 152 state parties, but implementation lagged, especially in low- and middle-income countries. The WHO reported that in 2008:

This inadequate performance did not go unnoticed. Veterans of the U.S. fight against tobacco companies increased their support. In 2008, Bloomberg Philanthropies launched a $250 million initiative to reduce tobacco consumption in low- and middle-income countries, expanding on the $125 million that it contributed for this purpose in 2006. That same year, the Bill & Melinda Gates Foundation added its support to global tobacco-control efforts, focusing on Africa. This philanthropic funding increased international assistance for tobacco control, which was low and came exclusively from the WHO. 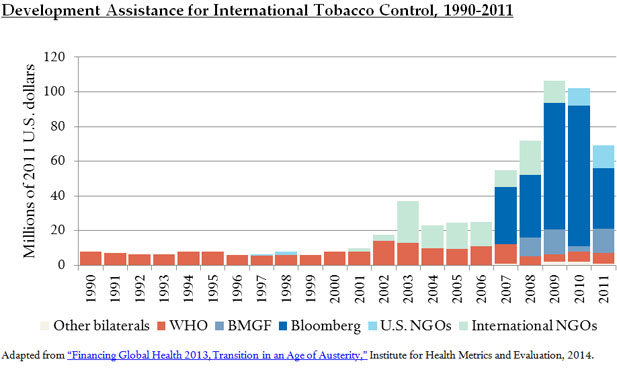 More donor support made a difference. It funded a WHO-led effort to focus FCTC implementation on six measurable and proven tobacco-demand reduction measures, known by the acronym MPOWER. These MPOWER measures include bans on smoking in public places and tobacco advertising as well as tobacco excise taxes that amount to at least 70 percent of the retail price of cigarettes. The new donor money also supported expansion of international surveillance of the MPOWER measures by the WHO, the U.S. Centers for Disease Control and Prevention, and the Canadian Public Health Association. This surveillance has permitted regular and independent monitoring and reporting on country-level implementation of the MPOWER measures.

Clearer goals and better data have helped local health officials and advocates encourage their governments to improve FCTC compliance. NGOs and academic institutions, such as the Campaign for Tobacco-Free Kids and Johns Hopkins Bloomberg School of Public Health, have bolstered these local efforts with technical and advocacy-related support.

FCTC implementation has slowly improved. WHO reports show that the proportion of the world’s population living in countries with FCTC-compliant cigarette warning labels tripled between 2007 and 2012, from 4 percent to 14 percent. Similarly, the number of countries without restrictions on smoking in public places declined from 114 in 2008 to 81 in 2012. The share of tobacco tax revenues that countries dedicate to reducing tobacco consumption increased from a ratio of $500:1 in 2008 to $145:1 in 2012. The prevalence of tobacco use in many low- and middle-income countries started to decline as well. 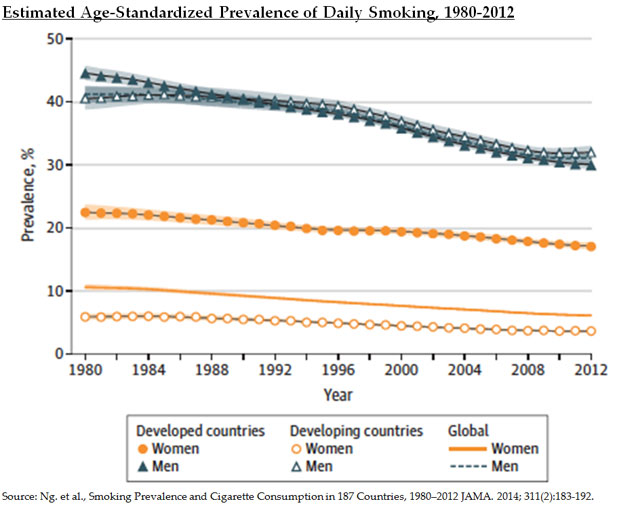 A decade later, it is clear that the FCTC, on its own, was insufficient to generate improved tobacco control in low- and middle-income countries, but has been a contributing factor in the recent progress that has occurred. Most of the philanthropic donors and intergovernmental, governmental, and non-governmental actors engaged in the global anti-tobacco movement predate the FCTC. On the other hand, the FCTC provided a platform for this global anti-tobacco movement and a source of accountability for local government officials who could be convinced to act.

Limits of the FCTC and Its Legacy

The FCTC has not fared as well as a model for international lawmaking on other health challenges. The agreement has spurred little intergovernmental cooperation. Although FCTC parties adopted a protocol on the illicit tobacco trade in 2012, only six countries have ratified it. Domestically, tobacco monopolies remain entrenched in many countries as obstacles to tobacco control measures, and 92 percent of the world’s population still lives in countries where tobacco taxes are below what the WHO recommends.

Donor support for international tobacco control remains low, especially relative to other global health causes. Although tobacco use remains the second leading cause of death worldwide, only $68 million of the $31.4 billion in development assistance for global health in 2011 went to tobacco control. A decade later, none of the global health treaty proposals that the FCTC inspired have gained traction.

"A decade later, none of the global health treaty proposals that the FCTC has inspired have gained traction."

Many lessons from the FCTC’s first decade are positive, but ultimately they are not about the power of treaty law. The sources of progress on the FCTC are about the same tactics that have long been effective in public health: identifying the strategies that work, reducing them to implementable and measureable programs, supporting and coordinating local implementation efforts, and monitoring and maintaining accountability for the results. Under the right circumstances, international law can contribute to the success of these strategies, but cannot substitute for them.