Skip to main content
How Much Influence Does Iran Have in Iraq?

What are Iran’s interests in Iraq?

Iran has been deeply involved in Iraqi politics since the fall of Saddam Hussein’s regime in 2003. More than a dozen Iraqi political parties have ties to Iran, which funds and trains paramilitary groups aligned with these parties. Some paramilitary groups under the umbrella of Iraq’s Popular Mobilization Forces have pledged allegiance to Iran’s supreme leader, Ayatollah Ali Khamenei. These groups have used violence to crush opposition to Iranian influence and to try to expel the remaining U.S. forces in Iraq. Since the self-declared Islamic State was driven out in 2017, Iran-backed militias have frequently launched attacks on the 2,500 U.S. troops [PDF] who remain in Iraq in a noncombat, advisory capacity.

Two major interests drive Iran’s involvement. The first is preventing the government in Baghdad from again becoming hostile toward Tehran, as it was when Iraq invaded Iran and kicked off the countries’ 1980–88 war. Some one million Iranians and 250,000–500,000 Iraqis died in that conflict, during which Iraq reportedly used chemical weapons. Iran’s second goal is driving U.S. forces out of Iraq and the region at large.

Meanwhile, a handful of Kurdish opposition groups that are barred from operating on Iranian soil are based in northern Iraq. Iran has sometimes launched strikes against these exiled groups, most recently when parties including the Democratic Party of Iranian Kurdistan and Komala Party of Iranian Kurdistan supported the women-led anti-government protests that have raged across Iran in late 2022.

Is there domestic resistance to Iran’s influence?

Iran’s meddling was one cause of widespread anti-government demonstrations that began in Iraq in 2019, when protesters denounced Tehran for propping up the corrupt system of government established in the post-Saddam era and condemned repression by Iran-backed militias. It also contributed to the political infighting that has prevented Iraq from forming a government since its 2021 general elections. One faction in that struggle, led by the powerful cleric Muqtada al-Sadr, has opposed both U.S. and Iranian interference. But Sadr’s bloc failed to prevent lawmakers from designating Mohamed Shia Al-Sudani as prime minister in October 2022, and Sudani now has the chance to form a government.

Additionally, many Iraqis revere Iran-born Grand Ayatollah Ali al-Sistani, a leading moral and religious authority who has modeled a “quietist” approach in which clerics do not formally participate in politics. He has taken no public position on whether Iraq should emulate the theocratic government in Iran, which some observers argue is a tacit rebuke of the Islamic Republic.

How strong are ties outside of politics?

The countries have inextricable ties by virtue of religion, culture, and geography. “You simply cannot move Iraq and Iran apart,” Iraqi President Barham Salih said at a CFR event in 2021. Both are majority Shiite Muslim countries with large Kurdish populations, and they share a thousand-mile border that sees an estimated ten million crossings annually, many of them by Iranian pilgrims visiting shrines in Karbala and Najaf that are among the most revered in Shiite Islam. In recent years, Tehran has reportedly poured hundreds of millions of dollars into restoring some of these shrines. Before that, Iran took in hundreds of thousands of Iraqis who fled Saddam’s dictatorship, many of whom returned home after he was ousted. 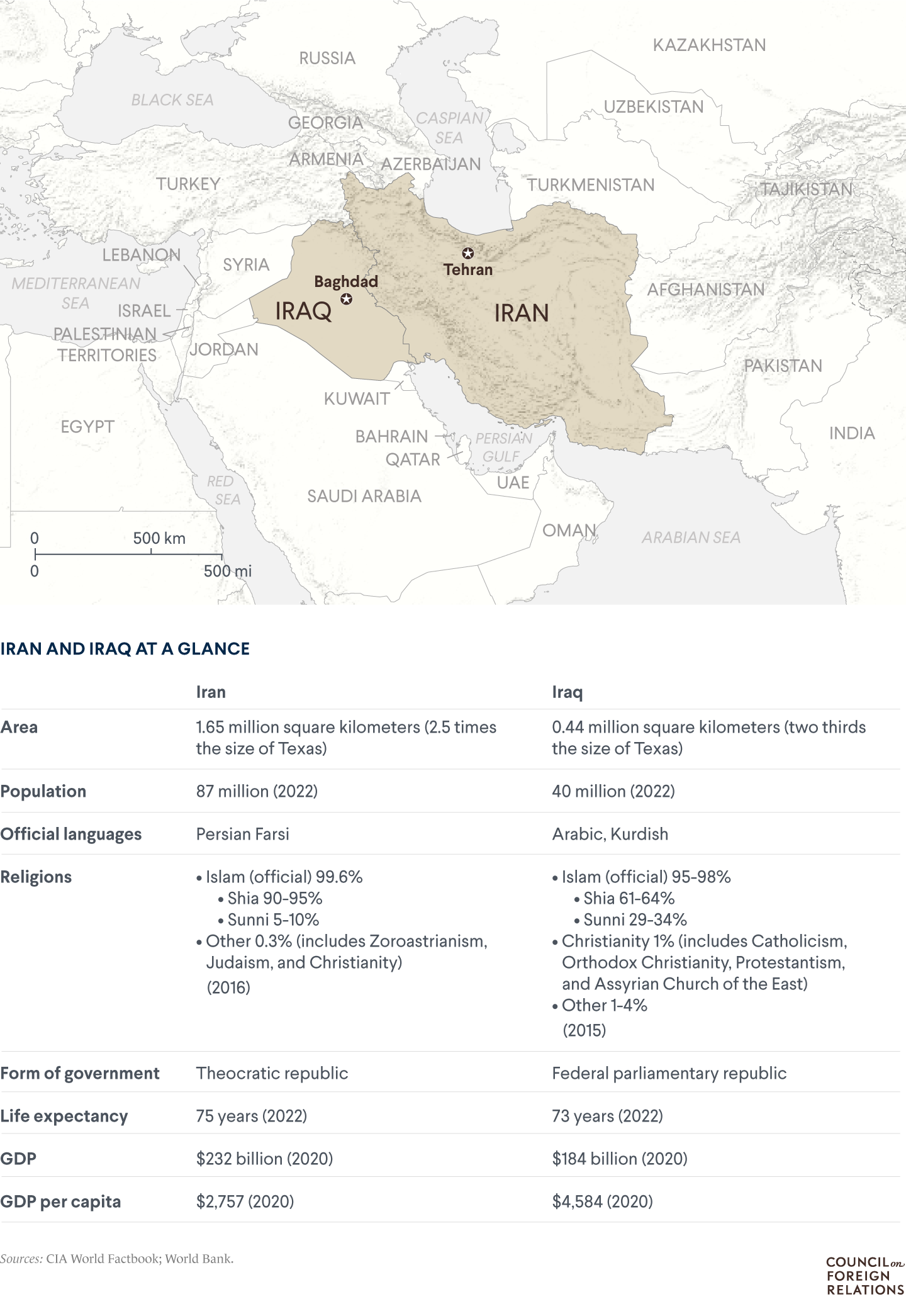 The countries also have strong trade ties; Iraq was Iran’s second-biggest import partner in 2021, after China. Their trade relationship drew attention during Iraq’s 2019 protests, when demonstrators decried the proliferation of low-quality Iranian-made goods in their country. Iraq has long relied on Iran for natural gas and electricity imports, and the United States exempts it from sanctions on Iran’s energy sector. The countries also share water resources, which could become a flash point as the effects of climate change and Iranian dam construction limit water to Iraqis downstream.

What does the relationship mean for the United States and other powers?

Since the end of its eight-year occupation of Iraq, the United States has sought a strong Iraqi government that can withstand threats to its sovereignty, including those from Iran, and that Washington can maintain friendly relations with. Preserving U.S. access to Iraq’s vast energy resources is also a priority; though Iraq’s federal government invalidated U.S. oil firms’ contracts in Iraqi Kurdistan earlier this year, the United States still has large investments in the region’s energy sector. Ultimately, Washington and Tehran are jockeying for influence in the country, and Washington is at a disadvantage. Experts within and outside the region say Iraqi leaders see Iran as a more reliable partner than the United States, and the winner of Iraq’s current power struggle will likely seek to balance ties with Washington and Tehran.

Other countries keen on containing Iran could dilute its influence by increasing their cooperation with Iraq. For example, after decades of tense relations with Baghdad, Iran’s rival Saudi Arabia is working to help Iraq become less dependent on Iranian electricity as part of a broader effort to strengthen ties. Even amid political deadlock, Baghdad continued to seek stronger ties with other Arab governments and play mediator in regional conflicts, including by attempting to mend ties between Riyadh and Tehran. Some analysts argue that these efforts could help Iraq raise its standing regionally and move out of Iran’s shadow.

What’s the outlook for the relationship?

Iran has been engulfed in anti-government protests since late September, with some experts likening the unrest to that which preceded the country’s 1979 revolution. If the protests provoke a significant change in the country’s governance, that could transform its involvement in Iraq. More immediately, ties could grow tighter if Sudani succeeds in forming a government.