The oil spill in the Gulf of Mexico is a continuing headache for the U.S. government, posing particularly tough decisions about the direction of U.S. energy policy. Jack Coleman, a former federal lawyer for energy policy issues who is now an industry lobbyist, criticizes the Obama administration’s decision to place a moratorium on most new Gulf drilling. "This is a devastating blow to American energy production," he says, adding the six-month moratorium could translate into years of a delay because of competition for drill leases worldwide. He says the proposed changes in liability for new drilling activities could also have serious repercussions for the oil industry. "Multibillion-dollar companies will not be able to operate [offshore] if you have unlimited damages liability," Coleman says.

At a recent congressional hearing, executives from the oil industry were chided for their oil spill response plans, and one oil executive admitted that the industry was not well-equipped to handle large spills. Why were they so unprepared?

Accidents are going to happen every now and then. The whole idea of having the Oil Spill Liability Trust Fund was so that after you get past the cleanup cost and a certain level of damages at $75 million, then you share the rest of it across society because it’s so important to society that we have oil.

Under the Oil Pollution Act, you’re supposed to look at the worst-case scenario, and design, and have equipment on hand to deal with the worst-case scenario, no matter how remote that scenario could be. But once again, there is an element of likelihood that goes into this. Spill response plan requirements are laid out by the government, not by BP or the other operators. It’s laid out by this whole spill response plan organization, the National Response Team. It’s headed up by the Coast Guard. So they determine under the Oil Pollution Act what kind of spill response should be able to be performed. The government has the ultimate responsibility, not the company, for making sure that the equipment is available to implement that plan.

There’s been significant criticism of the federal response to the oil spill, particularly on the inability to stop the spill. Do you think this is a feasible expectation?

I don’t think it’s reasonable that the government is going to have the equipment on hand to be able to cap the well, for example, because they don’t have this technology, they just don’t have this expertise. It would cost a lot of money to duplicate the expertise that’s in the private sector. So I’m not faulting the government for that. What I am faulting the government for, though, is the failure to make sure that all the equipment is on hand that is needed to do these things. For example, they had very little fire booms available in the Gulf of Mexico. That five hundred feet or a thousand feet, whatever it was, was so minimum, it’s not even laughable. That’s a government responsibility, to make sure that either the government has it on hand or the private sector has it on hand.

On the one hand, you’re saying about the industry, "This was such a remote possibility that it wasn’t something that they were going to plan for," but then on the other hand, it sounds like you’re saying it was the government’s job to make sure that the industry planned for it.

We’re talking two different things here. The government had to give them different approvals to drill, and normally when you give approvals, you look and say, "What are the reasonably foreseeable impacts of drilling?" You try to put in mitigation measures before you give them permission to drill. This would not be a reasonably foreseeable event. Therefore, under the law, they’re not required to have any kind of mitigation measures to deal with this extreme unlikely event. That’s under the Outer Continental Shelf Lands Act.

What we’ve just been talking about is under the Oil Pollution Act, where the Coast Guard has responsibility for worst-case scenario response. And it is a different law. And it is a different matter. The Oil Spill Response Plan doesn’t get developed for this one BP well. It’s developed for all these similar kinds of activities in the Gulf of Mexico. And there’s not just an oil response plan for BP. 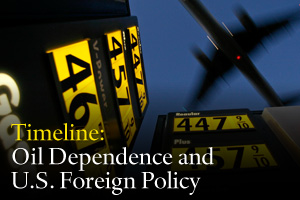 You’re saying that the Coast Guard should have had better contingency planning because it’s their role to foresee worst-case scenarios?

That’s right. This has nothing to with whether it was five thousand feet below the surface. Many of these things don’t have anything to do with the fact that a blowout of the sea floor was not reasonably foreseeable. They’re just poor planning, generally. Even for a spill that might’ve happened at a platform in shallow water on the surface.

There’s been a lot of finger pointing at the Mineral Management Service. The MMS is being restructured, and there’s talk in Congress about removing or increasing the oil liability cap.

Accidents are going to happen every now and then. The whole idea of having the Oil Spill Liability Trust Fund was so that after you get past the cleanup cost and a certain level of damages at $75 million, this current law says then you share the rest of it across society because it’s so important to society that we have oil. And it’s not just that we have oil production in the United States, but it’s also important that we have oil imported in tankers.

If you’re going to have unlimited liability, for companies there’s very little reason to have an Oil Spill Liability Trust Fund. Multibillion-dollar companies will not be able to operate [offshore] if you have unlimited damages liability. I’m absolutely convinced of that because the insurance market is not available to cover that kind of risk.

If the law is written fairly, it would also affect tankers and companies that bring oil in by tanker. You can have a tanker with 250 millions of barrels of oil and you would have a huge environmental problem because the oil would likely, potentially, come out much faster than this well and closer to shore near sensitive habitats.

The Obama administration put a moratorium on new drilling in more than five hundred feet of water for six months, which is being fought over in court. What’s the industry got to do to prove these operations are safe enough to continue and that the oil industry is equipped to handle things going forward?

Number one, this moratorium was not well-supported in the law. The technical experts who were peer reviewers for [the U.S. Interior Department’s] safety report (PDF), more than half of those technical experts came out saying that this moratorium was not necessary, that there were actions that could be taken immediately and that this was such an unusual confluence of events that was not repeatable anytime soon. And you don’t shut down everything because of such a low-risk event.

You do take extra action--one of the first things they could do is send out an MMS inspector to be there to test, be there when the blowout preventers test right before they start drilling, make sure that blowout preventer is fully operational. That’s not a path they’ve chosen to take. This is a devastating blow to American energy production, what the president’s done. It’s something akin to a hydrogen bomb. And I say that because I don’t believe it was technically driven. It was politically driven. When you start having politically driven actions, they impact energy security. There are only so many deepwater rigs in the world. And if we’re saying that we’re not going to allow any drilling for six months in deepwater, they’re not going to stay here, just sit idle. These rigs that normally get paid $400,000 a day to drill, they’re going to go somewhere else, and they’re going to be on contract for somewhere else for multi-years.

I just see this thing dragging out. All the companies have been told they’ve got to re-file their drilling plans and ask for permission again. You cannot solve those new drilling plans at the end of the moratorium until you have the drilling rigs under contract. You have to name what rig it is. Well, what drilling company is going to allow their rig to be under contract until after the moratorium’s gone? We’re going to start seeing reductions in oil and gas production in this country because of it.