The United Nations has said that close to twenty million people in Nigeria, Somalia, South Sudan, and Yemen are at risk of starving to death. The food crises in all four of these countries are due, at least in part, to ongoing conflicts there, says Arif Husain, chief economist at the World Food Program (WFP), a UN agency. Without an end to the fighting, international aid can do little more than provide “Band-Aids,” he says. “In most of these areas, if there is peace, and people have seeds, tools, and agricultural inputs, they can go back—they can restart.” 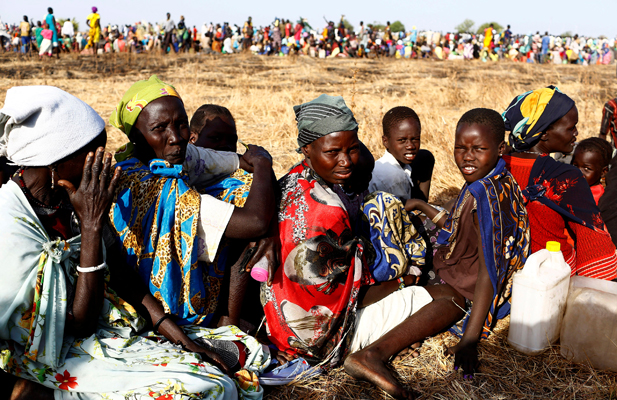 Women and children wait to be registered prior to a food distribution carried out by the United Nations World Food Program (WFP) in Thonyor, South Sudan. (Siegfried Modola/Reuters)

How dire are the food crises in these parts of the world?

Of these four [food scarcity] crises, three of them are purely conflict driven: those in northeast Nigeria, South Sudan, and Yemen. In the case of Somalia, you have protracted conflict but also weather-related issues. Our estimate is that now close to twenty million people are in bad shape [PDF]: five million in northeast Nigeria, three million in Somalia, about seven million in Yemen, and four or five million in South Sudan. In three of the crises, people in the rural areas are affected, and in the fourth one, Yemen, it is more urban people who are affected.

And how does the fighting play into these problems?

Conflict affects both the demand side and the supply side. On the demand side, you cannot produce your own food, you don’t have your own livestock anymore, and your income opportunities go down, particularly in the sense of agricultural labor. But at the same time, on the supply side, prices of essential food and non-food commodities keep rising because traders working in conflict zones face higher and higher transaction costs, which are then passed on to the consumers.

[Additionally], when you have conflict, people’s ability to escape is limited. If you look at northeast Nigeria, the people who had the means to get out of besieged areas and go to safer places, like Maiduguri, the capital of Borno state, did so some time ago. Those who could not leave are stuck in camps and elsewhere under extremely harsh conditions. And because of the extreme insecurity, which has brought commercial transport to a standstill, lifesaving goods and services do not reach them regularly. Their only hope is humanitarian assistance, which is also sporadic for the same security and access reasons.

How significant is the distinction between populations facing famine and those that are food insecure?

When you are declaring famine, you are already too late; people have already died. The 2011 famine in Somalia was declared in July of that year. The estimate was that about 260,000 people died, and the majority of deaths happened before July.

The people we are talking about are the poorest of the poor, so the difference between “haves” and “have nots” is minimal, and their ability to deal with the shock is also minimal. When we delay, these people are forced to sell some of their assets, like livestock, ox plows, or seeds. Then, even when the situation gets better, they cannot enter into the economic stream again. For them to recover takes years, if not decades.

Insofar as these four countries’ governments are involved in their respective conflicts, they are contributing to food insecurity. Are they cooperating in terms of famine prevention?

WFP intervenes at the request of national governments in both emergency and nonemergency environments. Implementation of projects requires full agreement of the national authorities, who are also responsible for ensuring the safety and security of the staff. All four of these countries requested food assistance.

However, in complex cases where governments may be a party to the conflict, WFP may intervene at the request of the UN secretary-general.

It is not enough for me to say, “I can go visit Dikwa or Bama in northeast Nigeria.” What is important is the flow of humanitarian assistance, which has to be regular; it has to be every month. That type of access to many of these places is not there, because if you have access and money, there is no reason why people should starve.

One thing that has been proven several times is that famines are not about availability of commodities. Famines are about access—physical access and economic access. If those two things are curtailed, people die. No, we don’t have access to all the places where we need it.

The second thing is that the WFP is voluntarily funded, so the timeliness of funding matters. If we don’t get financial resources in time, we cannot act.

What kind of aid would be required to bring these countries back to a minimal level of food security?

First and foremost, the conflict must stop. Without that nothing will work. If the conflict stops, then it is about investing in rural areas, women, and children, and getting them back to school. It is about giving people the assets that they have lost.

In most of these areas, if there is peace, and people have seeds, tools, and agricultural inputs, they can go back—they can restart. But those resources have to come in a timely way. In the meantime, you also need safety nets—social protection systems—because if your population is hungry or weak, none of this works.

“If you’re totally downtrodden, it doesn’t take much to convince you to go and fight somebody’s war.”

U.S. President Donald J. Trump’s budget blueprint proposes substantial cuts to foreign aid. What would be their effects on these humanitarian crises?

I really hope the funding will not be cut, especially for humanitarian work. Previous governments, whether Republican or Democratic, have always supported humanitarian assistance. A letter signed by many [retired U.S.] generals said [the United States] cannot give up on soft diplomacy. Our hope is that that will remain the case.

Nobody wants to see children dying on their televisions. In past famines—that of 2011 in Somalia or 2005 in Niger—the American people have always assisted people in need. That is a tradition in the culture, and I don’t think that’s going to go away. I’m pretty optimistic that funding will not be cut, especially for the humanitarian work.

The UN just released a report [PDF] on threats to children in these regions caused by water scarcity. How does the water crisis tie into all this?

What should these countries expect for the future?

The most important thing is a political end to these conflicts. Unless that happens, nothing else will work; we will do Band-Aids and that’s it.

It is amazing: if you give people the opportunity and enhance their production or opportunity sets, they will do the rest. If you build the road, markets will automatically start to come up.