Pyongyang has increased its combative rhetoric in recent days, including threats of preemptive nuclear strikes on the United States and South Korea. Meanwhile, Washington has flexed its military deterrent in the region, with rare stealth bomber sorties and other exercises in South Korea. "The primary danger is really related to the potential for miscalculation between the two sides," says CFR’s Korea expert Scott A. Snyder. "And in this kind of atmosphere of tensions, that miscalculation could have deadly consequences." Despite the sabre rattling, Snyder says he is not so concerned about the public threats as much as he is about some guerrilla-type attack by the North.

The North Koreans cut off military communications with the South, and said in a statement that "under this situation where war may break out at any moment," there’s no reason to keep in touch. Why is this rhetoric getting so heavy?

First, North Korea is dissatisfied with the condemnation by the UN Security Council that came following its latest nuclear test in February. Secondly, there are regular military exercises that are going on right now in the southern part of the peninsula by the United States and South Korea. These are routine exercises; the North Koreans complain every year, but the decibel level of the complaints and the sorts of actions they have taken this year have gone a lot higher than in the past.

Another factor is that because of concerns in South Korea about the possibility that Pyongyang might be more aggressive, as shown by its nuclear capability, South Koreans are matching North Korea’s threats as a way of sending a signal that they won’t be subject to nuclear blackmail.

The United States would get directly involved if there was any direct attack, right?

Yes. The State Department essentially said that they see this as part of North Korea’s "usual pattern." After North Korea’s nuclear test, Washington has been trying to signal deterrence to North Korea while signaling assurance to South Korea. President Obama had a conversation with then-president Lee Myung-bak and underscored U.S. commitments to defend South Korea. There was a speech by the national security adviser, Tom Donilon, which also gave a strong statement of resolve by the United States to defend its allies and its interests. We had Defense Secretary Chuck Hagel making a missile defense announcement in response to North Korea’s nuclear test. And we had the Deputy Secretary of Defense Ashton Carter passing through South Korea during exercises and in the course of a press interview mentioning that B-52s had also been part of the exercise--signaling to the North Koreans that the U.S. had a nuclear response as an option. 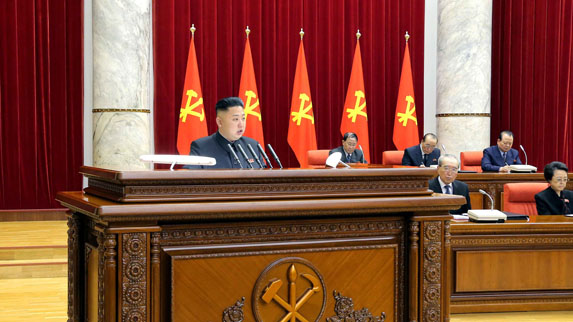 Has the overflight of South Korea by U.S. B-2 bombers unnerved the North Koreans?

The overflight has gotten North Korea’s attention, as evidenced by the leadership’s decision to hold emergency national security meetings and the announcement that they are placing their missile launch sites on alert. But North Korea’s continued threats also suggest that the leadership can’t concede to external threats without losing face, and Kim Jong-un’s questionable domestic standing may mean that conceding is not an option. It is hard to see how North Korea will unwind its escalatory activities unless it feels it has established a position of so-called strength.

Has there been any indication that the North Koreans are actually doing anything on the ground?

They’ve shown pictures of exercises, and there is a set of manuevers going on that have been timed in conjunction with the U.S. exercises. But there have been no unusual movements or other activities other than announcing alert status and kind of creating an atmosphere of mobilization.

It’s the third anniversary this month of the sinking of the South Korean ship, the Cheonan, off the coast by North Koreans. Has that heightened tensions at all?

There was a memorial service on March 26 in South Korea where President Park Geun-hye spoke about the importance of remembering the casualties from that incident and pledging resolve. The timing of the anniversary, along with the exercises, feeds into a cycle of tension between North and South Korea.

But let me just say one thing about North Korea’s usual modus operandi as it relates to threats. Where we’ve seen provocations, they’ve been guerrilla-style provocations, not something signaled in advance. North Koreans usually want the element of surprise. They have an interest in provocation where prospects of escalation are limited, and they benefit from ambiguity of attribution. I worry more about North Korea when they are not rattling the sabre.

When they do it out of the blue?

Yes. So at this point, it’s unlikely that the bite is going to match the bark.

Interesting. There’s been a lot of pictures of Kim Jong-un with top military officials--is he trying to assert his dominance now?

He’s been visiting a lot of military units and observed some exercises. The real issue with the new leader is that it’s just not clear whether the rules of the game have changed or whether the heightened decibel level of threats might have something to do with a different approach by Kim. I’m coming to the conclusion that we’re seeing basically the same pattern but with some variations--and the real concern is whether, as a young leader, he may have a higher risk acceptance than his father.

Just recently, he was with Dennis Rodman watching a basketball game, right?

That was really a strange incident, where at least we did see a side of the young leader that is probably more human and in touch with what Westerners can understand. But his choice in terms of who he engages from the West does seem unconventional.

And now we have a new president and a new prime minister in China. Have they indicated how they feel about Korea at all?

My own view is that they haven’t yet made a definitive review or judgment on their policy toward North Korea yet. A lot of the decisions related to the UN Security Council resolution and how they have responded to that had more to do with simply calibrating and trying to manage the situation based on the respective pressures from the international community and their interest of stability with North Korea. But I don’t think we know yet what these seven top leaders’ judgment collectively is going to be about how to possibly adjust the policy toward North Korea.

At the end of the old regime, there were some suggestions that they were getting a little fed up with North Korea’s nuclear testing. But on the other hand, they haven’t broken their aid or trade relationship.

In 2009 we saw the same cycle, where North Korea shot a rocket and did a nuclear test and there was a Security Council resolution. And at that time, a lot of people thought that the Security Council resolution showed more cooperation from China, but then a couple of months later the top leadership essentially decided to pursue a policy of hugging North Korea closer. So that’s why I don’t think that what we’ve seen yet is the actual policy judgment from the top leadership in China.

In North and South Korea relations, one bright spot had been this industrial compound in Kaesong. That’s still going on, right?

It is, but the significance of the announcement from last week was that the hotline that’s been suspended was used to support some of these operations. These operations could be affected by the disuse of that hotline, and of course that would inhibit South Koreans, who are running the complex, from going North. It will probably also slow the transit of goods from South Korea to Kaesong.

What does North Korea really want from the United States and South Korea?

What Pyongyang wants from the United States is basically acceptance of North Korea as a nuclear weapons state and the end of the U.S. "hostile policy" toward North Korea. With South Korea, we’re still at an early stage with the new South Korean president, Park Geun-hye. We’re still in the early stages of a period in which both sides are going to be testing each other to see what their prospects are for a more stable relationship than what existed with the previous president.

The Obama administration came into office in 2009 and tried to extend its hand to North Korea, but that was met by a test of rockets and there’s never been a revival of the Six Party Talks.

That’s correct. The closest the Obama administration has come to being able to restart the Six Party Talks was the so-called "leap-day" agreement from February 29, 2012, where the United States and North Korea stated a set of parallel pledges to provide food aid and to resume international inspections of some of North Korea’s nuclear facilities. But that was on the condition that North Korea would not proceed with nuclear or satellite launches, so that agreement broke down last spring when Pyongyang announced that it was going to do a satellite test.

And there hasn’t been any agreement between the two governments since then?

That bilateral agreement was designed to affirm that North Korea would talk about denuclearization at the Six Party talks--so it was really the pathway to get back to Six Party Talks. The failure of that agreement seems to foreclose any prospect for renewal of the Six Party framework for the time being.

What are the chances of hostilities between North and South in the near future?

The primary danger is related to the potential for miscalculation between the two sides. And in this kind of atmosphere of tensions, that miscalculation could have deadly consequences. A second concern is the possibility--although we don’t see evidence of it--that instability inside North Korea could lead to some kind of lashing out by the North, and that would obviously result in hostilities.

So at the moment there’s no sign of anything happening, but there’s always that risk.

Tensions are high, and the real question is whether or not North Korea’s current fever is going to pass. And we see South Korea beginning to extend some olive branches; they announced they were going to resume humanitarian aid separate from denuclearization talks. So there are some potential ways that the situation could begin to calm, but North Korea has to work itself out of this frenzy before the situation settles down.