A 7.9-magnitude earthquake and its subsequent aftershocks devasted Nepal this week, killing more than five-thousand people and injuring another eleven thousand. In addition to heavily damaging Nepal’s infrastructure and heritage sites, the quake triggered landslides in rural areas and an avalanche on Mount Everest. According to the United Nations, 1.4 million people are in immediate need of food assistance, and more than eight-million people—over a quarter of the country’s population—have been affected by the quake. "[This earthquake] underscores how vital it is to redouble our investments in resilience," says Nancy Lindborg, president of the U.S. Institute of Peace. In the short term, Lindborg says rescue and relief efforts must prioritize saving lives and providing medical care and shelter, but Nepal’s long-term reconstruction will require sustained political will to make sound infrastructure investments. 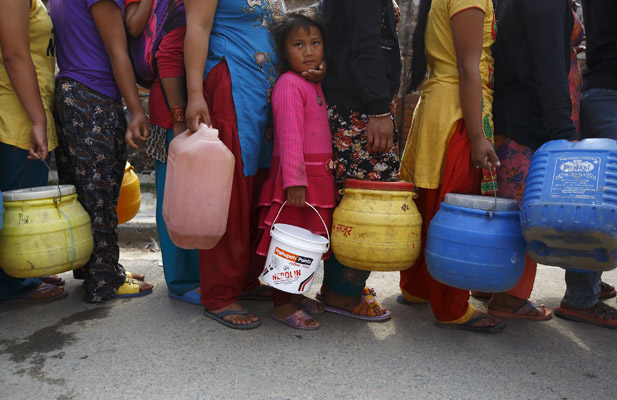 A girl stands in a queue to fill her container with water near the makeshift shelters after Saturday’s earthquake in Kathmandu, Nepal. (Photo: Navesh Chitrakar/Courtesy Reuters)

What are the priorities for relief efforts following Saturday’s earthquake in Nepal?

Urgent, coordinated, life-saving response with a heavy emphasis on logistics is the priority for next few days, especially until the aftershocks cease.This includes rescuing anyone left alive in the rubble and getting supplies to those injured or without food, shelter, and water. USAID has dispatched the search and rescue teams from Fairfax County, Virginia, to assist. Moving supplies is a big logistics and coordination challenge, but a very important one. It is going to be extremely difficult to get to the many remote mountainous areas to assess damage, treat the injured, and deliver essential supplies. The majority of these efforts will probably require many helicopters.

"This could be a moment of deep reconciliation."

Once things settle down, however, it is imperative to shift from the direct delivery of goods to efforts that help families get back on their feet. Too often after disasters, families are marooned in shelters, where helplessness and hopelessness take over. Reopening small businesses and rebuilding homes cannot happen fast enough. We saw in Pakistan, after the 2013 earthquake, how the government used the rebuilding process to push for improved and more earthquake-resistant structures.

Nepal is one of the poorest countries in the world with unusual challenges given its mountainous terrain, weak infrastructure, and fragile political system. What are the prospects for recovery and reconstruction?

Nepal faces enormous and heartbreaking challenges. Nepal was just beginning to see progress in recovering from a decade of internal conflict. Even middle-income countries confront a long recovery process after natural disasters: The Philippines is still working on critical policy issues and recovery efforts from Typhoon Haiyan in November 2013.

Nepal has the challenge of corruption and still simmering fault lines from the Maoist conflict that plagued the Himalayan country from 1996 to 2006. However, sometimes a shattering crisis can also pull a country together, as we saw in Aceh, Indonesia, after the 2004 tsunami. This could be a moment of deep reconciliation.

What role can foreign governments play in facilitating recovery and relief efforts?

Foreign governments need to respond and coordinate. Nepal needs help, and that is most effective when coordinated through the government of Nepal with help from the UN cluster system. Now is a time of maximum confusion, when precious time is lost because there is not full attention to coordination and logistics.

How can individuals contribute to the effort?

"Nepal has been the poster child for disaster-risk reduction and resilience."

Most importantly: Send cash, not stuff. It is better for groups to procure critical supplies most needed in the region. Often, well-intended items are sent and clog the critical supply pathways. Similarly, individuals should not head to Nepal without being connected to an experienced organization that can plug people into a coordinated response.

This quake was long anticipated and yet the government showed little capacity or will to take proper precautions. What steps might be taken now to mitigate damage from future natural disasters?

Nepal has been the poster child for disaster-risk reduction and resilience for years in anticipation of an earthquake of this magnitude. There have been significant efforts to help upgrade and actually implement building standards, strengthen the many mud buildings (especially schools), and in general lessen the many risks associated with old historic cities and poor infrastructure. Not nearly enough progress was made, but I believe it would have been worse without the focused effort over the past few years. It underscores how vital it is to redouble our investments in resilience. Fundamentally, resilience requires a government with the capacity and political will to take the necessary steps to reduce these risks.

How will this disaster affect Nepal’s long-term development goals?

We will know the long-term effects when the aftershocks stop and a more thorough assessment can be made. These kinds of disasters can set back development by decades. There is both the rebuilding of basic services and infrastructure and the economic activities that have been affected. Recovery is always slower than anticipated.

Moreover, people have been traumatized, have loved ones lost or injured, and suffer from continued, terrifying aftershocks. For Nepal, the loss of so many ancient sacred buildings is especially difficult. Many are now are just dust. They can never be fully rebuilt, and a part of Nepal has been torn apart. But the Nepali people are remarkably resilient and persistent, so I’m putting my faith in their ability to push through.

India’s relationship with Nepal is at its lowest point since the five-month “Indian Blockade” of 2015. The gap between Kathmandu and New Delhi is widening as India has not been able to keep up with transformations in Nepal and uses old lenses to view its neighbor.