Skip to main content
The Tragedy of Syria’s Civilians

Three years after Syrians first rose up against the regime of President Bashar al-Assad, more than nine million people in Syria are in urgent need of humanitarian assistance, two-thirds of whom are displaced, according to the United Nations.

This is "a conflict in which the very notion of the civilian has been lost," says David Miliband, president of the International Rescue Committee (IRC), a nongovernmental organization that assists refugees and distributes aid within Syria. Neighboring countries that play host to refugees have stepped up, the former British foreign secretary says, but their resources have been strained by the scale of the crisis. Miliband laments the failure of UN Security Council Resolution 2139 [PDF], which requires combatants in Syria to give aid convoys unencumbered access to civilians, saying: "It makes a mockery of the nations who voted for it." 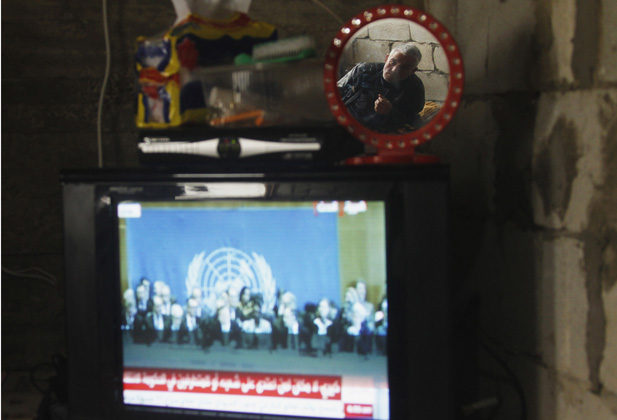 Syria’s civil war has produced a refugee crisis of staggering proportions. What new approaches has your organization taken, and is there an underlying philosophical shift?

The Syria crisis has outstripped all predictions in its brutality and in the numbers of people affected. Of the three million or so people who are in [Jordan, Lebanon, Iraq, and Turkey] as refugees, it is important to remember that the vast majority are not in refugee camps.

The second noteworthy aspect is that by refugee standards, these are middle-class people. They’re people who were educated and employed in Syria.

Thirdly, it’s important to reflect that in the IRC’s experience, there’s been a change over the last nine-to-twelve months in the increasing number of refugees coming to our centers in the four neighboring countries, where we’re operating. An increasing number of those refugees have been moved [as many as] six times within Syria; they’ve been multiply displaced within Syria before they became formal refugees. That speaks to the growing intensity of the conflict.

"A thousand Lebanese towns and villages have had their populations more than doubled."

Innovations in the way services are provided have had to follow these facets of the crisis. One, services need to be opened to host communities as well as to refugees. Two, these are people for whom dealing in money and credit is second nature, and so cash [assistance] programming has been an obvious feature of our work. Thirdly, and sadly, in this crisis as in many others, women and girls are 60 to 70 percent of the total refugee population, and that’s significant in the kind of programming that’s essential. Finally, many of the states to which refugees are going are themselves challenged on a number of fronts—Lebanon most obviously. In an area where most Lebanese don’t send their kids to local public schools, the need for what we call community-based education that is a complement to the mainstream system is clear.

What tensions or resistance have you faced from the host communities?

The host communities in Lebanon, Jordan, Iraq, and Turkey have been remarkably open, generous, and respectful of the refugee populations. A thousand Lebanese towns and villages have had their populations more than doubled by refugee influx. The refugees who’ve arrived in Lebanon make up about 20 or 25 percent of the population. That’s like the whole of Britain coming to the United States, in percentage terms. For the scale of the hit, the level of resentment and tension has been remarkably low.

Having said that, rents have gone up, prices have gone up, and there’s been a huge increase of pressure on local services. That’s why it’s been essential to open up our services and our cash assistance to host communities as well as refugee communities. It’s basic good practice in a situation where you’ve got populations mixed together that you try to provide a degree of openness in your service provision.

Syria’s neighbors each have their particular political concerns and, in some cases, worries about stability of their own. How do you manage those concerns?

There is a high degree of political sensitivity required in all the places that one’s operating, even if you’re not a Western NGO. The good news for us is that although we’re a New York–headquartered NGO, the face of IRC in Jordan is much more Jordanian than it is American, in Lebanon it’s much more Lebanese, and in our cross-border work into Syria it’s much more Syrian. That’s an important down payment on the kind of local knowledge that one needs.

Secondly, it’s very important to be open and transparent with what you’re doing, which we have been with local and national governments. That NGOs need to be registered is perfectly legitimate; the principle of openness and transparency seems to me to be absolutely critical.

Thirdly, it’s important to add value to local services because in all four countries, notably Turkey, the feeling at the beginning of the crisis was that the local provision would step up. In all cases it has, but it’s been overwhelmed by the sheer number of people. In Turkey two hundred thousand people were announced by the prime minister at the beginning of the crisis, but with now eight hundred thousand refugees in Turkey, it’s a problem that goes beyond having twenty-three refugee camps. We’re always seeking to add value to what local actors are doing. It’s important to coordinate because you don’t want different players tripping over each other in the delivery of humanitarian aid.

Inside Syria, one of the major humanitarian stories is the inequity between the amount of aid delivered to government-held areas and rebel-held areas. Far worse off are those in besieged areas. How do you reach those cut off from aid?

The most desperate situation is for those in the besieged cities, and in the wholly appropriate discussion about extending cross-border aid it is important not to forget those who are beyond the reach of cross-border efforts. By definition, those in besieged areas are people whom aid agencies are in the main not reaching, whether [by agencies] recognized in Damascus or operating from outside.

There’s now talk of a draft resolution that would compel the opening of four border crossings. If that were to pass, would the regime follow through on its threats to expel the UN agencies currently inside Syria?

It would be very hard indeed for Syria to expel the UN from Damascus. It would be a flagrant abandonment of its own people and put at risk millions of their own citizens who are living in government-held areas and are civilians with perfect rights to the basic necessities of life.

UN officials led by [emergency relief coordinator] Valerie Amos are working hard within the confines of what has been a very divided Security Council for the last three years. One of the sad lessons of the last three years is that when the Security Council is divided politically, it also gets divided on humanitarian questions. It’s a measure of how far political division has infected the humanitarian discussion that Resolution 2139 was so necessary and so important. What’s almost worse than having no resolution is having a resolution that’s then not implemented. And that’s what the Syrian people are facing at the moment.

In the United States and the UK, there’s talk about shifting humanitarian assistance from the UN to NGOs, which don’t face the same legal constraints. Would that be a positive development in the long run?

There’s always got to be a balance of working through multilateral agencies and working through the NGOs. NGOs are both funded by the UN and work alongside the UN, and do so gladly. The challenges that the UN is facing have led to some of the announcements that you’ve seen, although governments like the UK remain big funders of the UN as well as big funders of NGO cross-border efforts.

The failure to implement Resolution 2139 doesn’t just make a mockery of the UN; it makes a mockery of the nations who voted for it and are not willing to see it through. That’s why I think that there’s such a premium on holding fast to the principle that the things that were demanded in 2139 are called to the UN’s mission.

Without a political resolution in sight and refugee crises that promise to be protracted, how do you combat fatigue and ensure long-term support?

I’m concerned that the world’s gravest humanitarian crisis and one of its most grotesque failures to protect civilians—a conflict in which the very notion of the civilian has been lost—[is] falling in public attention, and that the public and politicians are shrugging their shoulders, saying that it’s insoluble. That no special representative has been appointed to succeed Lakhdar Brahimi as UN–Arab League peace envoy speaks to the sense of hopelessness on the political track, and that means that the killing and the displacement are going to continue. Our job is to stop the dying, or at least to staunch the dying. That requires health and other services of a very basic kind.

The Syria crisis is misdescribed as such; it’s actually a regional crisis, and regional crises in the Middle East are never contained within the Middle East. The repercussions of this are being and will be felt much, much wider, not least through the increasing concern about foreign jihadis going to be trained in Syria. People sometimes say that the danger for Syria is that of Balkanization; I often say that the real danger is of Afghanization.

For me, as the leader of a humanitarian organization, the stakes are human stakes. The people that we’re seeing, both in the country and outside, are in desperate need of some basics of international rule and law. This doesn’t just look like a war without end; at the moment, it looks like a war without law. That is something the world can’t afford.