Saudi Arabia’s execution on January 2 of a Shia protest leader, Nimr al-Nimr, touched off events that have exacerbated sectarian tensions in the Middle East. The reprisals include the ransacking of the Saudi embassy in Tehran, after which Riyadh broke off diplomatic relations. The execution may have been motivated by the regime’s need to bolster support from majority Sunnis, says Toby Matthiesen, a senior research fellow at Oxford University, pointing to economic challenges, as well as troubled military campaigns in Yemen and Syria. "Sectarian and anti-Iranian sentiment is always a good tool to distract from these problems," he says. As "Iran has taken on Nimr’s case in its propaganda," he adds, Saudi Sunnis "feel they need to rally behind the royal family." 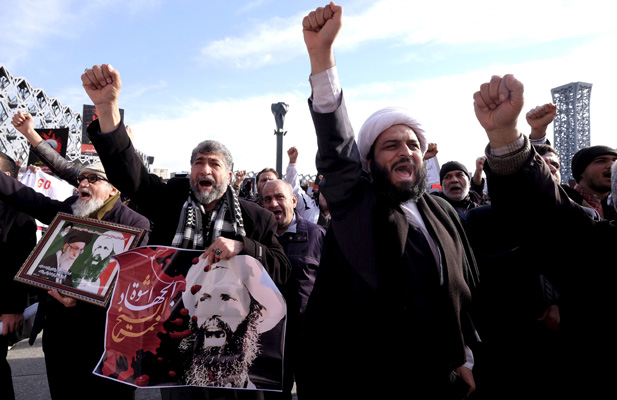 Why did the Saudis execute Sheikh Nimr al-Nimr?

Nimr al-Nimr had been outspoken in calling for a revolution in Saudi Arabia. He was voicing the grievances of the Saudi Shia, and particularly of the younger generation that didn’t have much hope that their cause would ever be resolved.

Nimr was arrested in 2012, shortly after he gave a speech denouncing Prince Nayef, the long-standing interior minister who had just died. Nayef—the father of the current crown prince and interior minister, Mohammed bin Nayef—was in charge of the security file for the last two decades and was blamed for human rights abuses, especially in dealing with the Shia minority. Nimr refused to backtrack on his comments, even while he was in prison.

The demands of the Shia have been the same for the last few decades. They’re excluded from the state and from the top levels of economy. There’s never been a Shia minister. There’s only been one Shia ambassador in the whole history of Saudi Arabia, and that was to Iran. Their regions are economically marginalized. Shiism is not recognized as a valid form of Islam. [Saudis are] taught in primary schools that Shia are nonbelievers.

If the Saudis had the political will to resolve [Shia marginalization], it would be quite easy. Then they would prevent Iranian influence there, because these people are Arabs, they don’t have much to do with Iran. But the Saudis are not doing this, partly because sectarianism is a tool they use. And now that economic resources are getting scarce, it will be even more unlikely that this will be resolved.

Did the Saudis anticipate the extent of the backlash to his execution?

"Iran has taken on Nimr’s case in its propaganda. This increases sectarianism at home and it makes the Sunnis feel they need to rally behind the royal family."

They probably didn’t expect it to be that big, but they must have calculated that this was going to increase sectarian tensions and draw a response from all kinds of Shia actors in the region. And they knew that this would rally Sunni Saudis around the flag, because they didn’t like Nimr and also they needed to because [the state was also] executing so many al-Qaeda guys. [Saudi Arabia has] a kind of tactical alliance with al-Qaeda in the Arabian Peninsula in the Yemen war—they’re fighting on the same side. It seems that when they decided to execute these al-Qaeda guys, they needed to throw in a few Shia to limit the domestic backlash.

Now the Shia have started saying "Nimr was our leader," and Iran has taken on Nimr’s case in its propaganda. This increases sectarianism at home and it makes the Sunnis feel they need to rally behind the royal family and be united against Iran. The Shia feel more alienated, and maybe some will move more toward confrontation and perhaps even militancy. This all plays into the hands of the ruling family, which divides and rules.

Austerity measures kicked in last week after low oil prices have contributed to Saudi Arabia’s budget troubles. (This rolls back benefits implemented when the Arab Spring protests reached Saudi Arabia in 2011.) How much of this is because the royal family has concerns about its domestic hold on power?

I don’t think it’s a coincidence that it comes just a few days after the announcement of the cut of benefits. And, on the same day—the first of January—Saudi Arabia also unilaterally ended the cease-fire and started bombing Yemen again. Many Saudis that I speak to now agree that the Yemen war is not going particularly well. And in Syria, too, Saudi Arabia is not achieving its goals [Editor’s note: Chief among these is the ouster of Syrian President Bashar al-Assad]. Then you have the domestic economic problems and no political reforms. Sectarian and anti-Iranian sentiment is always a good tool to distract from these problems, and it’s working.

The [Saudis can argue that the] executions are a domestic matter. It’s a breach of the human rights convention, because they got unfair trials and the accusations against Nimr would not be crimes in most other countries, but that’s not enforceable, whereas an attack on an embassy is a violation of international law and diplomatic protocol. Iran is seen as the perpetrator again, at least in some of the media commentary.

Is there much domestic Sunni discontent with the Saudi royal family?

There are various opposition groups in the country that have been more or less quiet over the last few years because they thought there was no momentum for reform. The Shia, in 2011, were the first who went out to protest, and then later calls for protests [by Sunnis] were denounced as being an Iranian conspiracy. [Potential protesters] were accused of aligning with the Shia, and so they never materialized. The same narrative was used quite successfully to undermine Sunni dissent over the last few years.

This rupture in diplomatic relations comes as Iran is about to be freed of the nuclear-related sanctions, with implementation of the nuclear agreement expected soon. The U.S. position on Syria also appears to be inching toward the Iranian position. Is this escalation of tensions related to perceptions of U.S. policy in the region?

The Saudis and the Emiratis are afraid of what will happen if Iran is accepted back as a normal country. What happens if U.S.-Iranian relations are normalized? For the last thirty-five years they’ve had a monopoly on being the U.S. allies in the Gulf.

They see any gain by Iran as a loss. They don’t see, for example, that if the Gulf region were more stable, it would be good economically for everyone. [The diplomatic rupture] is probably a way to try to force the Americans’ hand on Iran. If Iran now overreacts, who will the Americans side with? [Washington] hasn’t denounced the executions particularly strongly, and I don’t think there will be a stronger reaction either.

Does part of this also have to do with Saudi Arabia’s regional alliances? Bahrain and Sudan joined Saudi Arabia in breaking off diplomatic relations with Iran, and the UAE, Kuwait, and Qatar recalled their ambassadors from Tehran.

Sudan and Bahrain expelled Iranian diplomats last year; this is not a surprise. But in the Gulf, what’s surprising is that the [United Arab] Emirates, Kuwait and Qatar [downgraded relations].

The Emirates have very strong trade links with Iran. They have not cut relations fully for trade reasons. Kuwait has a border with Iran, and links between Kuwait and Iran are much closer than those between the other Gulf states and Iran. And there’s a large Shia minority in Kuwait, which is allied with the ruling family. The whole affair will create tensions in Kuwait. I don’t think Oman will do anything. And on Qatar, I am also quite surprised, although again, Qatar only downgraded relations, did not cut them.

"The Saudis and the Emiratis are afraid of what will happen if Iran is accepted back as a normal country."

We’ll have to see which other countries are now expected to fall in line, but it’s a bit like other Saudi initiatives that we’ve seen over the last few years. Morocco and Jordan were invited to join the [Gulf Cooperation Council], and [they] politely refused. Then the Yemen war: Egypt and Pakistan were said to be the big allies that would send ground troops, and these two refused, even though they are quite dependent on Saudi money. And now this recent [Islamic] counterterror initiative: half the countries didn’t know that they were going to be part of it. Saudi Arabia wants to be the hegemon in the Sunni world and across the whole Arab world. Its regional stance has certainly increased since 2011, but partly because several countries disintegrated or because rulers were overthrown. So Saudi hegemony is fragile, and Saudi and other Gulf clients are good at taking money but not necessarily so good at giving political support.

Iran has elections for parliament and the Assembly of Experts coming up in February. Do different factions have different incentives to either ratchet up or down these regional tensions?

The huge debate in Iran is about how to deal with the neighbors, and especially the Saudis. [President Hassan] Rouhani and all his diplomatic team and [former president Ali Akbar Hashemi] Rafsanjani have spent a lot of diplomatic capital on getting this [nuclear] agreement with the United States. The other big part of their diplomatic outreach is better relations with the Gulf states, and particularly with Saudi Arabia. Rouhani strongly condemned the attacks on the embassy. But a substantial part of the establishment, mainly the Revolutionary Guard, the [paramilitary] Basij, and many clerics, are very anti-Saudi. This comes from [Ayatollah Ruhollah] Khomeini’s time. Khomeini hated the al-Sauds. What the Saudis don’t understand is that by shoring up this anti-Shia sentiment in the region, executing al-Nimr, and now breaking off relations, they will strengthen the hardliners in Iran.

Does some of the Saudi leadership actually want that outcome?

I suppose, because it feeds into the hands of hardliners on both sides. The new [Saudi] leadership is pretty hardline. This kind of anti-Iranian regional great game is the backbone of their whole foreign policy strategy. The Saudis legitimize most of their regional initiatives, from Syria to Bahrain to Yemen, with the argument that they are countering Iran. Saudi media has used the Iranian bogeyman for decades, but over the last few years anti-Iranian—and, by default, anti-Shia—incitement has taken on new and dangerous proportions. The Yemen war is, I suppose, the main example of this.

Are there any prospects for an end to the intervention in Yemen?

Peace talks were held in Switzerland a few weeks ago and they stopped without any results. They’re supposed to resume in the coming weeks. There was a cease-fire to facilitate the talks but on January 1 the Saudis restarted the bombing campaign—they are escalating the war in Yemen again. The Iranian involvement in Yemen is usually overstated. But if there was ever a time [that Iran would] escalate that involvement, it’s probably now. And similarly, I suppose that Saudi Arabia and Iran will not be in the mood to make concessions in Syria and will support their proxies more strongly than ever.