Skip to main content
Would a Paris Climate Deal Be Legally Binding on the U.S.?

The United States and other parties to the UN Framework Convention on Climate Change (UNFCCC) will meet in Paris November 30 to December 11 to try to reach an agreement on new international climate change measures. President Barack Obama’s administration has said any climate accord reached in Paris is not going to be a treaty. Treaties require the support of two-thirds of the Senate, something unlikely to be achieved given the current Republican control of the body. However, Paris could still yield legally binding provisions short of a treaty, says CFR Adjunct Senior Fellow John B. Bellinger III. “Because the U.S. is already party to the UNFCCC, which requires the U.S. to take steps to mitigate climate change, and the executive branch has existing authority to limit carbon emissions under the Clean Air Act," he says, "the administration likely believes it has a good domestic legal basis to agree to certain legally binding climate change provisions.” 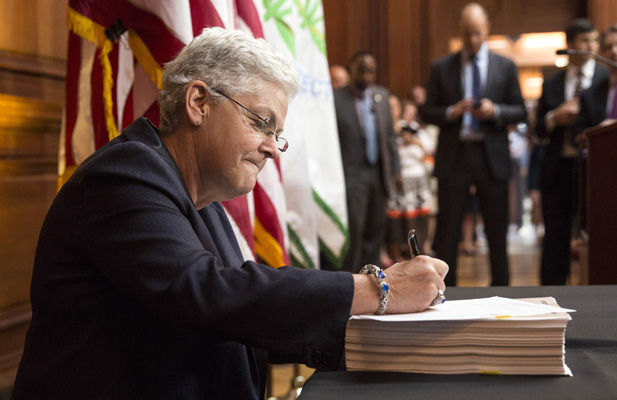 How binding will any agreement reached on climate change policy in Paris be on the United States?

More specifically, many EU countries want the Paris agreement to include legally binding emissions targets (which would require parties to commit, as a matter of international law, to reduce carbon emissions by a certain percentage by a certain date) and to require parties to make financial contributions to help other countries reach these targets. If negotiations are successful, the agreement may well include legally binding emissions targets, but the Obama administration would likely not agree to these obligations. This is because at the time the 1992 UN Framework Convention on Climate Change was approved by the Senate, the George H.W. Bush administration told the Senate that any future international agreement under the UNFCCC to adopt targets and timetables for emissions reductions would be submitted to the Senate for its advice and consent.

Instead of agreeing to achieve binding emissions targets, the Obama administration is more likely to agree only to a procedural obligation to announce a nonbinding target. Indeed, in March 2015, the Obama administration already announced its “Intended Nationally Determined Contribution” (or INDC) for reducing carbon emissions, consistent with political commitments made by UNFCCC parties in 2013. The White House announced an economy-wide target of reducing greenhouse gas emissions by 26 to 28 per cent below 2005 levels by 2025.

Thus, the United States may already have complied with a potential new legal obligation simply to announce an emissions reduction target (while not taking on an obligation to achieve that target). Such an obligation to announce a goal, even if binding, would not be sufficiently onerous to require the agreement to be treated as a treaty requiring Senate advice and consent.

Even if the Obama administration does not agree to binding emissions targets, the Republican-led Congress is still likely to be critical of any international agreement on climate change endorsed by the administration. As with the Iran deal earlier this year, Congress could potentially pass legislation requiring the executive branch to submit the agreement for congressional review. However, that would upset the traditional understanding between the executive branch and Congress that this kind of non-treaty executive agreement is not required to be submitted to Congress for advice and consent.

What’s the Obama administration’s legal strategy here? Is the approach similar to that with the Iran deal?

The Obama administration knows that the Senate will not give advice and consent to a climate change treaty. Hence, the administration’s strategy is to agree only to legally binding provisions that would not require the agreement to be treated as a treaty for purposes of U.S. law.

In contrast, the Iran deal (the “Joint Comprehensive Plan of Action”) did not have any legally binding provisions and was not an international agreement. Instead, it was merely a nonbinding “political declaration” (albeit a very complex one) and the Obama administration referred to it as an “international arrangement.”

The administration’s strategy is to agree only to legally binding provisions that would not require the agreement to be treated as a treaty for purposes of U.S. law.

There are several reasons for the difference. Congress had enacted comprehensive sanctions on Iran, and a legally binding agreement with Iran requiring the president to waive sanctions might arguably require the agreement to be treated as a treaty. In contrast, because the United States is already party to the UNFCCC, which requires steps to mitigate climate change, and the executive branch has existing authority to limit carbon emissions under the Clean Air Act, the administration likely believes it has a good domestic legal basis to agree to certain legally binding climate change provisions, provided it does not commit to achieve specific emissions targets.

What would be the domestic legal implications of this strategy? Many U.S. states are already challenging the EPA’s recent carbon emission rules.

Some treaties the United States joins require Congress to enact new legislation to implement U.S. obligations. In other cases, the United States joins treaties that require no new implementing legislation because the country already has national or state laws that result in compliance with the treaty. For example, the UN Convention on the Rights of Persons of Disabilities, which the Senate rejected in 2012, would not have required Congress to enact new implementing legislation because Congress had already enacted the Americans with Disabilities Act in 1990.

In the case of a Paris agreement, the Obama administration knows that not only will the Senate not approve the agreement as a treaty, but that the present Congress will not enact any implementing legislation requiring the United States to limit carbon emissions or provide international financial contributions to mitigate climate change. However, under the Clean Air Act passed by Congress in 1973 and amended in 1990, the Environmental Protection Agency already has substantial authority to issue regulations to limit carbon emissions.

Although the Obama administration could not obligate the United States to achieve specific emissions targets without the Senate’s advice and consent, it could commit to take more general, but unspecified, actions to limit carbon emissions. The administration could then implement those general commitments through the authority delegated to the EPA by Congress in the Clean Air Act.

What lessons did the administration learn from the 1997 Kyoto Protocol?

Under Kyoto, signed by [President Bill] Clinton’s administration in 1998, developed countries agreed to make substantial emissions cuts. However, because the Senate had in 1997 unanimously approved a resolution expressing its opposition to any agreement that did not require developing countries to make emissions reductions, the Clinton administration never submitted the treaty to the Senate.

In 2001, President [George W.] Bush stated that he opposed Kyoto because it exempted much of the world, including India and China. President Bush’s rejection of the Kyoto Protocol engendered significant international criticism, especially in Europe, contributing to the impression that the Bush administration opposed international law.

The Kyoto experience confirms for the Obama administration not only that the Senate (which has only grown more opposed to climate change mitigation measures since 1997) will not support any international agreement committing the United States to binding emissions targets. It also demonstrates that Congress strongly opposes any agreement that places greater burdens on developed countries while exempting China and India and other parts of the developing world.

In recent decades, presidents from both parties have been reluctant to pursue treaties for fear of Senate obstruction, instead entering into executive agreements. What does this say about the executive branch’s ability to forge policies in areas like climate change?

These agreements are legally binding as a matter of international law (and other countries generally consider them to be “treaties”), but they are not considered “treaties” as a matter of U.S. domestic law. The Senate has long agreed to this practice, and there has generally (but not always) been rough agreement between the branches regarding the types of agreements that require Senate advice and consent and those that do not.

Although it is certainly getting harder for presidents to secure Senate approval for treaties (especially large multilateral conventions) as a general matter, difficulties in the last few years may be due more to distrust of the Obama administration than to outright Senate rejection of all treaties.

The George W. Bush administration, in fact, was highly successful in securing Senate approval for treaties. During the eight-year Bush presidency, the Senate approved 163 treaties on a wide variety of subjects, including multilateral treaties on human rights, arms control, law of war, and atmospheric, marine, and animal protection.

In contrast, the Senate has approved only thirteen treaties during the Obama administration—the fewest under any president since 1900. This can be attributed to strong Republican opposition in the Senate (particularly by a few senators such as Rand Paul), but has also been caused by a lack of White House attention.

What are the implications of all of this? It will likely be hard for a president of either party to gain Senate approval of controversial multilateral treaties, and thus the Obama administration will do its best to reach international agreement on strong climate change measures that can be implemented by the Executive branch alone and that would not require the administration to submit the agreement to the Senate.