More than one hundred thousand uniformed peacekeepers were deployed in Africa in early 2015, twice as many as a decade before. Peacekeepers have deployed to Somalia, the western Sudanese region of Darfur, South Sudan, and Mali, to name a few countries where civil wars and rebellions have claimed civilian lives and threatened to destabilize surrounding regions.

Peacekeepers in Africa are tasked with increasingly broad mandates, including civilian protection, counterterror, and counterinsurgency operations, and operations increasingly depend on partnerships between the United Nations and African Union. Peace operations can be important for maintaining stability and safeguarding democratic transitions, experts say. However, multilateral institutions that deploy troops face challenges related to country contributions, training, and relations with host governments.

Where are peacekeepers deployed in Africa?

As of May 2015, there were nine UN peacekeeping missions in Africa supported by more than eighty thousand troops (80 percent of all UN peacekeepers are deployed in Africa) and fifteen thousand civilians. The largest missions are in the Democratic Republic of Congo (DRC), Darfur (jointly administered with the AU), South Sudan, and Mali. Meanwhile, the AU leads a peacekeeping mission of more than twenty-two thousand troops and police in Somalia, known as AMISOM. The Economic Community of West African States (ECOWAS), a bloc of fifteen countries, has a small UN-recognized mission in Guinea Bissau.

There are some smaller peacekeeping forces outside AU and UN auspices as well: As of April 2015, there were more than 1,500 Multinational Force and Observers (MFO) peacekeeping troops on Egypt’s Sinai Peninsula. (Israel and Egypt established the MFO in 1981.) The EU has small training missions in Mali and Somalia, and France has deployed troops in Central African Republic (CAR).

What are UN peacekeeping mandates?

However, UN peacekeepers are increasingly deployed to war zones when not all the main parties have consented, such as in Mali and eastern DRC. There is also mounting international pressure for peacekeepers to play a more robust role in protecting civilians. Despite the principle of impartiality, UN peacekeepers have been tasked with offensive operations against designated enemy combatants, as in Mali and the DRC. “Contemporary mandates have often blurred the lines separating peacekeeping, stabilization, counterinsurgency, counterterrorism, atrocity prevention, and state-building,” George Washington University’s Paul D. Williams writes in a new CFR report.

What are AU peacekeeping mandates?

The African Union, a fifty-four country group that comprises all African states except for Morocco, establishes "peace support operations" when authorized by its Peace and Security Council, a fifteen-member body with no permanent members.

Since the AU’s Peace and Security Council (PSC) was established in 2004, it has sent or authorized over sixty-four thousand uniformed peacekeepers (troops and police) to missions on the continent. This includes authorizing two multinational task forces to fight against the Lord’s Resistance Army in central Africa and Boko Haram in Nigeria and surrounding countries.

The AU and several African regional organizations are developing the African Peace and Security Architecture (APSA), a set of institutions that is expected to house the African Standby Force, a permanent reserve of more than twenty thousand peacekeepers. The APSA is supposed to be ready by the end of 2015, although experts have doubts that it will be operational by then. The AU engages in activities similar to the UN, although there is no requirement that its forces remain impartial, and they may be called in where no peace accord has been signed. AU missions may be launched against the wishes of the country in conflict under “grave circumstances,” namely war crimes, genocide, and crimes against humanity.

How are peace operations staffed and funded?

Bangladesh, India, and Pakistan send the most troops to UN peacekeeping missions, while the United States, Japan, and France are the top funders. The top troop contributors to AMISOM are Uganda, Burundi, Ethiopia, and Kenya, and funding comes largely from the UN and the European Union. The disconnect between those nations that send troops and those that fund missions is often a source of conflict. Wealthy nations spend the most on peacekeeping, yet they send relatively few troops; meanwhile, countries that either send troops or whose citizens are directly affected by peacekeeping missions often have less say in how they are designed and mandated. 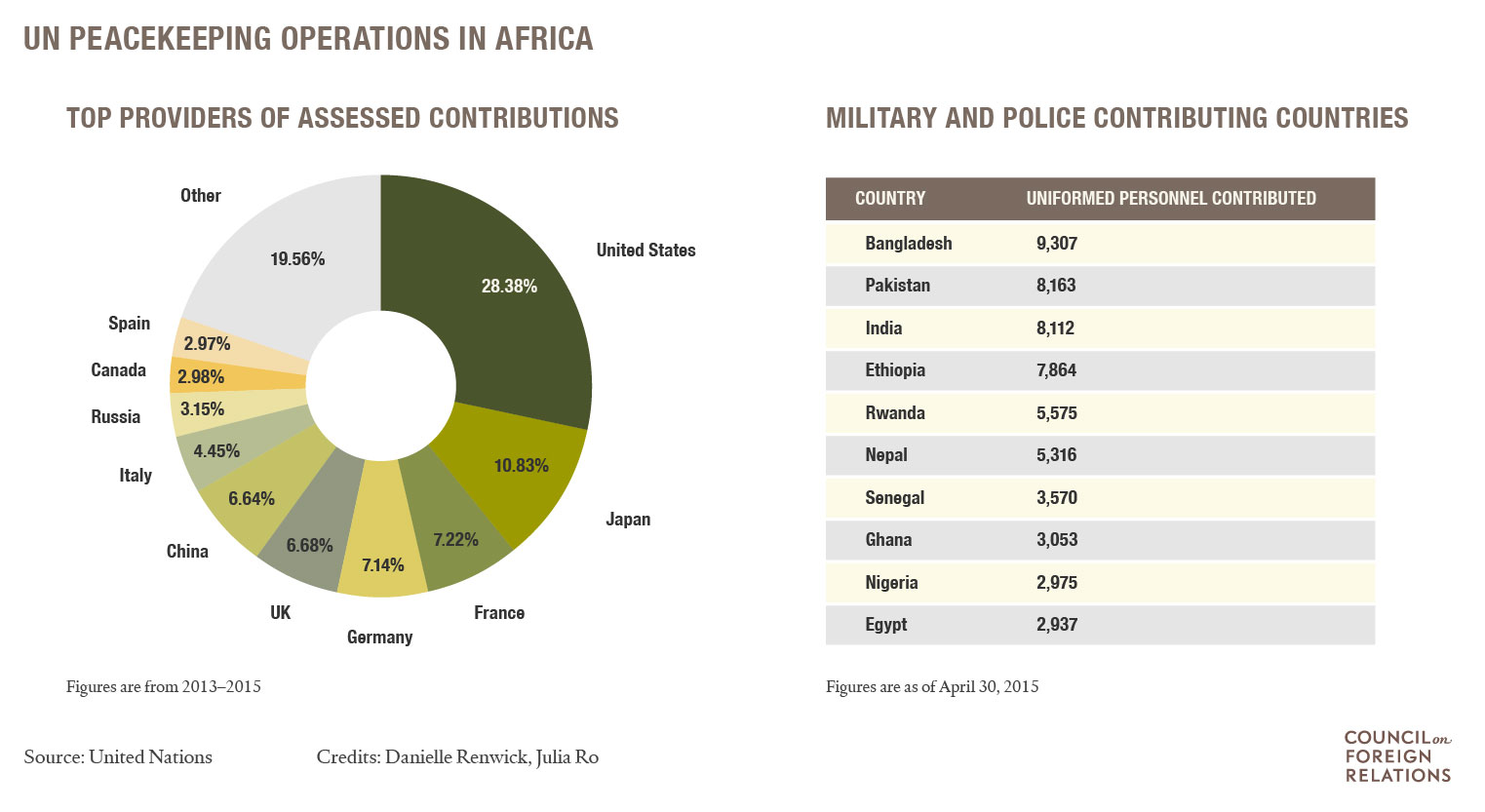 A 2014 internal review of peacekeeping practices related to civilian protection exposed some of these tensions. Researchers found that peacekeepers failed to protect civilians on several occasions. Countries that fund the annual UN peacekeeping budget of nearly $8 billion were angered by the findings, while Troop Contributing Countries (TCCs) demanded raises to the reimbursement rates their soldiers receive for serving in UN missions, rates which had not increased in more than a decade. (The UN reimburses countries that contribute troops a little more than $1,000 per soldier per month, and AMISOM troops now earn roughly the same allowances as UN peacekeepers.)

Both India and Brazil have cited their countries’ personnel contributions to UN peacekeeping in their bids to become permanent members of the Security Council, and several African governments have complained about having little say in the design and mandating of UN operations on the continent. “They would like to escape the tutelage of the UN in future crises,” says says Richard Gowan, an expert on multilateral security institutions at the European Council on Foreign Relations.

Leaders in Africa and within the UN have called for African forces to play a larger role in securing peace and stability on the continent, but budget constraints persist. While the UN has a regular peacekeeping budget, the AU must continually seek out donors, such as the UN, the EU, and the United States, to fund its missions. Only 2.3 percent of the AU’s budget comes from AU member states.

“When the AU deploys a mission, it always needs to find external assistance,” says GWU’s Williams. As a result, the AU cannot quickly deploy or sustain troops in the field. “The lack of indigenous sources of finance also undermines the AU’s credibility as a leading player in peace and security issues on the continent and reduces its ability to exercise ownership of particular initiatives,” he says.

Peace operations in Africa are increasingly collaborations between the UN and AU. For example, in Somalia, AMISOM member states provide troops while the UN provides funding, training, logistics, and planning support. UNAMID, a UN-AU hybrid mission in Darfur, absorbed and expanded a mission initially led solely by the AU.

How effective are peacekeeping operations?

Peacekeeping missions have had mixed results in Africa. Those that took place nearly a decade ago in West Africa in cooperation with ECOWAS—in Liberia, Sierra Leone, and Ivory Coast—are widely hailed as successes, whereas current missions to CAR, DRC, Mali, South Sudan, and Darfur, have not improved stability. “These missions have failed largely because they were deployed in a context of ongoing war where the belligerents themselves did not want to stop fighting or preying on civilians,” says Williams. He says that these missions have nonetheless managed to protect many civilians and reduced some of the worst consequences of civil war.

Peacekeepers have come under fire for failing to intervene at critical moments: The UN’s 2014 internal investigation found that peacekeepers only responded to one in five cases in which civilians were threatened and that they failed to use force in the ten deadliest attacks on civilians between 2010 and 2013. A 2014 Human Rights Watch report claims that UN peacekeepers and Congolese forces failed to prevent an attack in the DRC that left at least thirty civilians dead. In other cases, peacekeeping forces have been accused of commiting human rights abuses: AU peacekeepers were implicated in the disappearances of eleven people in CAR in 2014, and French peacekeepers are under investigation for sexual assault there.

What makes a peace operation successful?

“To be effective, peace operations need to be part of a broader toolbox of conflict-management instruments and a strategy to achieve conflict resolution and reconciliation,” Williams explains. Broader use of diplomatic tools, such as mediation, negotiations, peace enforcement (which can include Security Council–backed military action), and peacebuilding, defined as “strengthening national capacities” for conflict management, might reduce reliance on force by peacekeepers. Good relations with the host state are also crucial if the mission is to be part of a genuine process and effective political settlement. “Peacekeepers should not be expected to end wars if these broader tools are absent or the belligerents themselves do not want peace," says Williams.

Experts agree that the most successful peacekeeping missions are tied to an effective political strategy, have clear goals and expectations, and are well trained and funded. “Over the longer term, peace operations tend to succeed where they have clear political strategies for bringing old enemies together,” says Gowan. “Without a political strategy, even a significant military deployment will lose traction over time.”

Bruce Jones of the Brookings Institution says peacekeepers need more latitude to operate and more support from wealthy nations. “What we saw in the 1990s was an approach that said, ‘It’s not our job to put down one side or another. Our job is to police the peace.’ It simply wasn’t sufficient.” Jones says that for peacekeepers to be effective, they need authorization to conduct offensive operations and to receive more advanced training and equipment. “Countries with more developed military capabilities—countries from the OECD—need to come back into peacekeeping in a way they haven’t been in recent years," he says.

The Oxford Handbook of United Nations Peacekeeping Operations analyzes every UN peacekeeping operation between 1948 and 2013.

This brief from the Africa Center for Strategic Centers argues for boosting peacekeeping capabilities in Africa.

The following interview is with Fatma El Mehdi, one of eight negotiators in the Western Sahara peace process and a leader in the Sahrawi community.

Blog Post by Elena Ortiz July 20, 2021 Women Around the World

The Democratic Republic of Congo is Back on the Front Page