While politicians have focused primarily on the effects of trade, automation is rapidly transforming the nature of work. A recent McKinsey report estimates that half of the labor done today can be turned over to machines, fundamentally changing the nature of manufacturing, retail, food services, and data processing among other sectors. They predict that China, India, the United States, and Japan will see the largest and fastest shifts as a combination of easy capital, aging populations, and falling productivity speeds the transition away from a human workforce. By their calculations, nearly 400 million Chinese and 235 million Indian workers compete with robots today. In the United States and Japan, some 60 percent of jobs are susceptible to change. Although positions may not disappear altogether, the work people do will change, as roughly a third of today’s repetitive tasks could be taken over by machines.

Latin America will also see significant change – with roughly half of the current labor mix in Mexico, Brazil, and Argentina vulnerable to automation, a higher percentage than the United States. Sales of robots already top $2 billion a year, showing that the shift is already underway.

Brazil looks the most vulnerable to change, as its mix of stagnant productivity, an aging population, and the infamous “Brazil cost” make labor expensive. In manufacturing, retail, transportation, and agriculture more than half the work done by 32 million employees could be automated. 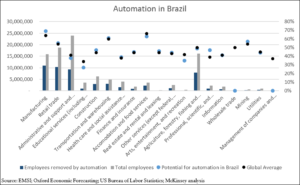 Though Argentina’s economy is slightly less susceptible to automation, its aging population combined with a decade long lack of investment could lead companies to step up capital spending on robotics under the more market friendly Macri government. Slowing the process down are strong unions and unreliable electricity. But over half of its agricultural and manufacturing jobs are vulnerable. 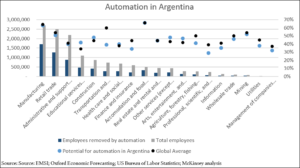 Structurally, Mexico has the highest potential to automate, as almost two-thirds of the work done in advanced manufacturing plastic, auto, and aerospace sectors could be phased out, affecting some five million workers. Yet the process in Mexico will likely be slower, cushioned by its younger population and lower wages. 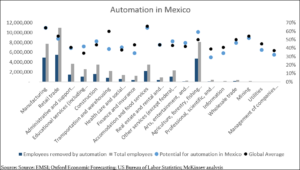 The global question is what comes afterward. The majority techno-optimists believe new jobs will emerge for these displaced workers, following the industrial and agricultural revolutions before. They point to car mechanics, coal miners, engineers and more recently app developers as previously unimaginable gigs that have appeared. The pessimists see this time as indeed different, as with the rise of artificial intelligence making machines viable substitutes for people.

Leaning optimistic, McKinsey’s advice for advanced nations rings just as true for Latin America. Governments need to expand social safety nets to protect those most vulnerable to these coming labor upheavals. They also need to transform schools and educational curriculums to train a twenty-first century workforce that complements rather competes with robots, encouraging creativity, flexibility, and entrepreneurship. And governments need to support basic research and innovation, helping them shape the ongoing revolution. For Latin America especially, it means promoting these types of investments, as even though they disrupt today’s status quo they will help ensure the region isn’t left behind in these global shifts.

Lopez Obrador Can Save Mexico by Embracing Globalization