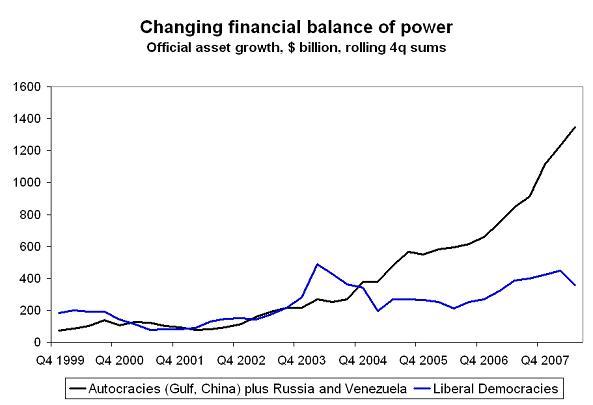 Right now, autocratic governments generally don’t finance other autocracies. China’s capital account is closed to Gulf sovereign funds (nearly) as tightly as it is closed to private hedge funds. China’s government is no more able to buy a stake in the Gulf’s national oil companies than private investors. China, Russia and the Gulf are all building up large financial claims on the United States and Europe far faster than they are building up financial claims on each other. 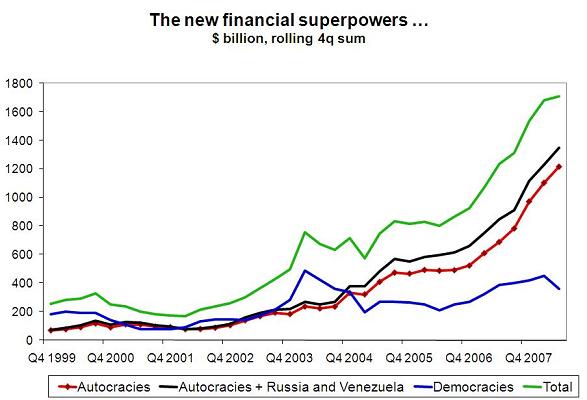 Both graphs, incidentally, are drawn from a paper that I have been working on over the summer, so stay tuned. The graphs include estimates for new inflows into sovereign funds (and the increase in the foreign assets of Chinese state banks) as well as the growth in central bank reserves. And yes, they indicate that the increase in the foreign assets of the world’s governments - particularly governments in the emerging world -- over the last four quarters has been truly extraordinary.

Earlier this week Gerald Seib noted -- quite correctly -- that high oil prices have increased the financial power of the world’s less-than-democratic oil exporters. Throw in the fact that high oil prices have yet to put a dent in China’s current account surplus or the accumulation of China’s foreign assets, and the shift in financial power away from from democratic governments is even more pronounced.

To me, one of the world’s greatest ironies is that US dependence on authoritarian governments for financing has soared over the last four year. US rhetoric hasn’t matched financial reality.

Though I guess it is equally ironic that Russian purchases of Treasuries over the past few months have helped to finance the current US aid mission to Georgia.

And that I suspect this is among the least significant -- though among the most visible -- ways the world will change as financial power moves away from the world’s big democracies.

Update: Both Paul Krugman and Steve Waldman touched on similar themes today. Both are worth reading.

NOTE: I ADJUSTED THE FIRST GRAPH IN LIGHT OF THE COMMENTS AFTER THE INITIAL POST