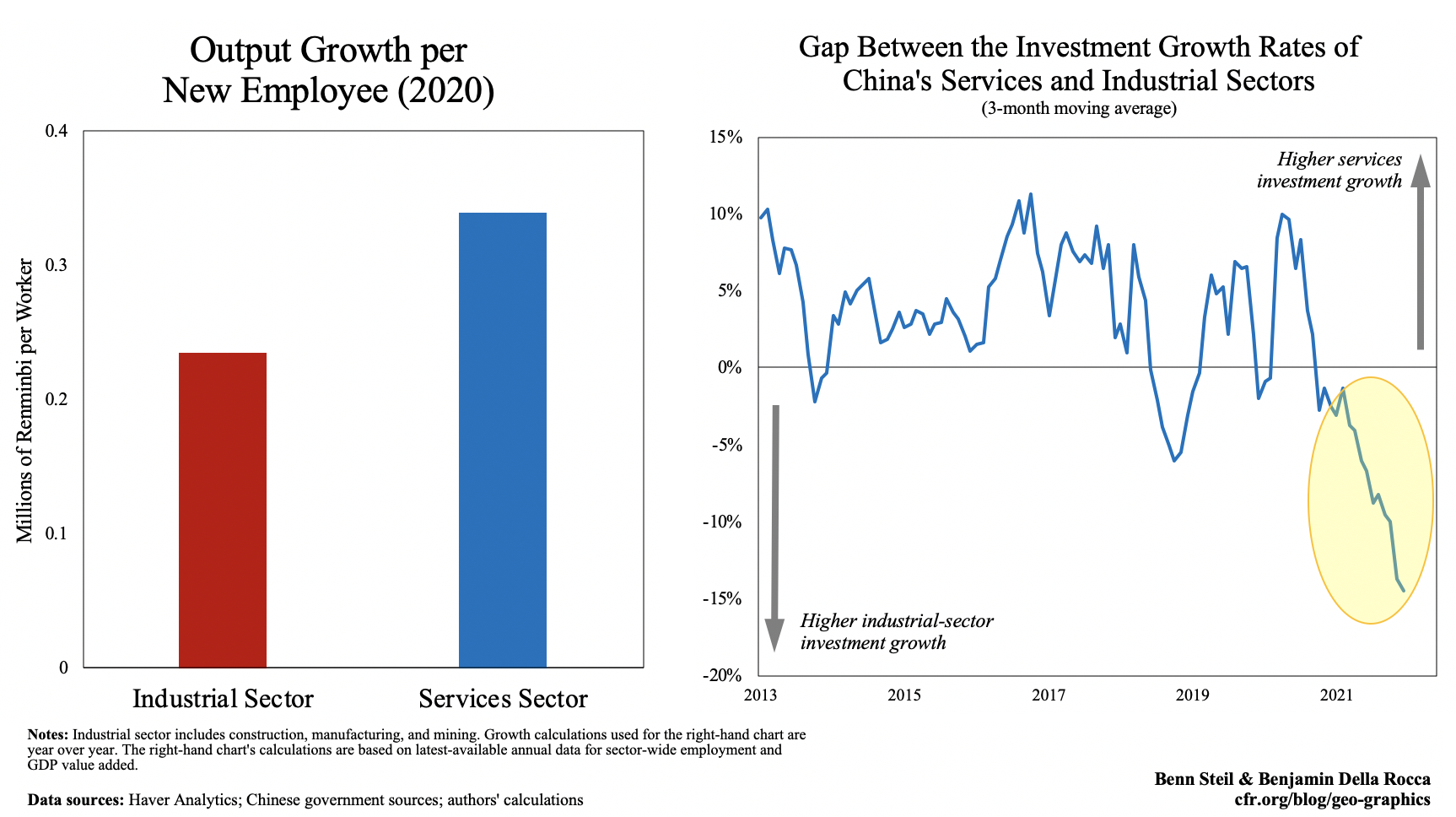 Back in 2010, nearly half of China’s annual gross domestic product (GDP) derived from heavy industry—construction, manufacturing, and mining. Today, that figure is down to 38 percent. Meanwhile, services’ share of GDP has risen from 44 percent to 55 percent, with agriculture contributing the remainder.

And if China were maximizing the productive use of its human resources, the services’ share would be higher still. As shown in the figure on the left, China’s services sector is far more productive than its industrial sector, producing about 44 percent more annual output growth per new employee.

The Chinese government recognizes the need to generate more growth from services, and less from heavy industry; or, at least, it used to. As recently as 2017, it was a top priority of President Xi Jinping to boost services’ share of output to 70-80 percent—on par with that of the most advanced countries.

Under Xi’s signature “Zero Covid” policy, a policy which recently shut down much of Shanghai’s economy for two months, China’s ambitious annual growth targets have become all but unattainable—at least without the ever-more visible hand of government. And so the government has shoveled enormous sums toward the parts of the economy it can most readily control—state-backed industrial firms and infrastructure developers. Xi himself has trumpeted this “all out” effort to build.

The results of this effort have been startling. In 2020, as seen in the right-hand figure, investment growth, which had since 2013 been concentrated in services, skewed sharply toward the much less productive industrial sector. Today, investment growth is 15 percentage points higher in that latter sector—the biggest gap since 2011. In effect, then, China has been burning productive resources at a prodigious rate for over two years now, all to flatter the omniscient planners who conjure up its annual growth “targets.”

To quote the American economist Herbert Stein, “if something cannot go on forever, it will stop.” How and when it stops are the great unknowns, but China’s massive and growing debt levels will be at the heart of the inevitable reckoning. It can ultimately choose its poison—insolvencies or inflation—but choose it must.

Why the Fed Is Tightening More Than It Thinks