As India welcomes Chinese President Xi Jinping today, it’s hard to miss the mixed messages coming from China. On the one hand, India and China have had a difficult security relationship over the past half-century, with a still-unresolved border dispute over which they fought a war in 1962. On the other hand, their trade and economic ties have rapidly expanded in the last decade, such that China has become India’s largest trade partner in goods with approximately $70 billion in two-way trade. The disjuncture between these two parallel tracks—unresolved security challenges along one, with rapid progress economically along the other—has become a truism for all analyses of India-China relations.

One might think that the eve of a major bilateral visit would be the time to showcase areas of positive cooperation, and downplay the most contentious problems. (Or at least save those for the negotiating room.) The Indian press has been busy reporting the size of the deals that President Xi will bring to India, particularly infrastructure investment in railways and other sectors ranging from $100 billion to $300 billion. The Chinese consul general in Mumbai told the Times of India that China would “on a conservative estimate” invest at least $100 billion in various infrastructure projects over a five-year period, “or thrice the investments committed by Japan.” Whatever the motivation, and that quote certainly suggests some competition for Indian dosti, that’s a large sum.

The last few months have also witnessed enhanced India-China collaboration in newer multilateral forums. This year’s BRICS Summit, held in Brazil, resulted in the announcement of the new BRICS Development Bank with capital contributions and an agreed-upon governance framework. China will host, but India will get the first rotating presidency. India’s application for full membership in the Shanghai Cooperation Organization, after years of observership, has been “initiated.” And China and India are both part of the ongoing Regional Comprehensive Economic Partnership negotiations in Asia.

Against this investment and diplomatic bonhomie, reports of military as well as civilian incursions into disputed territory along the India-China border have quickened.

Just as Prime Minister Modi and President Xi strolled along the Sabarmati in Ahmedabad today, reports of fresh incursions were hitting Twitter. Last week an alarming story emerged involving Chinese troops and civilians crossing into sectors in Ladakh and attempting to build a road. After a five-day standoff, both sides retreated. The Indian Army apparently believes that Chinese troops sought to connect one of their outposts to Indian territory to install a surveillance camera.

This isn’t the first example of incursions preceding major bilateral meetings. Last year, a significant mid-April incursion led to Chinese troops setting up camp in tents, also in the Ladakh area (Depsang). This extended over a two-week period into early May, and Indian media reported that the Chinese troops had extended nineteen kilometers into Indian territory. Premier Li Keqiang visited Delhi May 19 to 21 of last year.

Border incursions happen fairly regularly along the long, 4,057-kilometer undemarcated border between India and China. Most of these do not make the news, so those that do are more significant. Indian members of parliament fairly regularly request information about border incursions from the ministries of defense, home, or external affairs. But the regularity of these border crossings comes across in the official answers from ministries, noting the fact that the undelineated nature of the border leads to differing perceptions of where Indian and Chinese territory begins and ends, leading to what are technically termed “transgressions” (since the border isn’t defined). For example, in answer to a question submitted on August 13 in the Lok Sabha, the Ministry of External Affairs clarified that “situations have arisen on the ground that could have been avoided if we had a common perception of the border demarcation.”

In India’s Rajya Sabha, a question submitted to the Home ministry, also on August 13 (unstarred question 3776), requested more details about the specific “number of times the Chinese intruded into Indian territory during the last five years.” The answer, which focuses on transgressions due to differing perceptions of the border, is quite revealing. 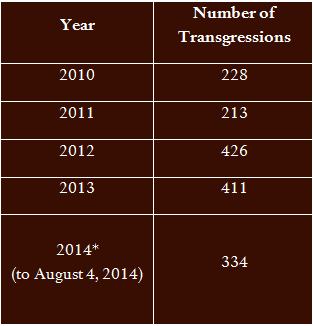 Transgressions doubled from 2011 to 2012. Based on the seven-month data the Home ministry provided for 2014 (through August 4), Chinese transgressions appear well on track to substantially exceed the 400-plus levels of the previous two years. It’s hard to reconcile this pattern with the economic cooperation messaging happening in parallel.

India has many good reasons to seek positive cooperation with China. But it also should expect its friends and partners to respect its territorial integrity. So as President Xi brings with him offers of bountiful support for India’s economic development, Indian officials will be conscious of the other, less salubrious message coming across from the border in Ladakh.