As Dr. Krugman notes, the Fed’s flow of funds data leaves little doubt that -- at least during the first quarter -- the rise in public borrowing was fully offset by a fall in private borrowing. An updated version of the chart I posted last week comparing government and private borrowing can be found on the website of the Council’s Center for Geoeconomic Studies.

The federal government borrowed over $1.4 trillion - -and if throw in state and local governments, total public borrowing topped $1.55 trillion. That isn’t a small sum. But households were borrowing (they actually paid down their outstanding debt in the first quarter). And modest borrowing by corporations was offset by a fall in borrowing by noncorporate business. Firms and households combined to reduce their borrowing by a bit less than $200 billion ($184.1 billion). To put that in perspective, households and firms borrowed over $2 trillion in 2006. That is an epic fall.

Borrowing less in aggregate translated into borrowing less from the rest of the world. If the flow of funds is right, the current account deficit in the first quarter in the first quarter was under $300 billion dollars ($293 billion according to table F107). $300 billion is closer to 2% of US GDP than 3% of US GDP. The result, obviously, is less need to borrow from the rest of the world -- or to sell equity to foreign investors -- to finance the United States import bill. 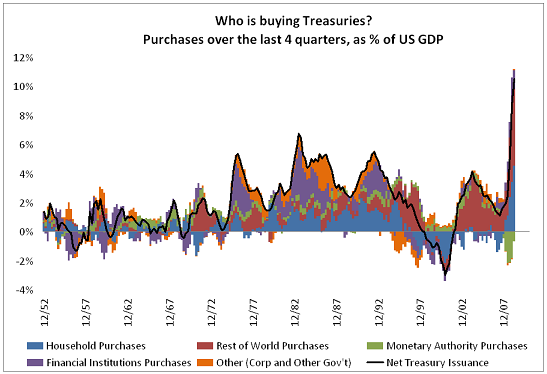 Before the crisis, foreign purchases formerly accounted for almost all new Treasury issuance. Over the last 12 months, foreign demand accounted for more like half of total issuance even as foreigners bought a record sum of Treasuries. And from what we know about the second quarter, I don’t think the basic story has changed.

Central bank custodial holdings continue to rise -- just look at the last week’s custodial data. But the world’s central banks are no longer buying up all the debt the Treasury issuing. And Americans are now saving, creating a new pool of funds that needs to be lent out. Moreover, the financial sector isn’t borrowing -- it actually is scaling back -- which means that the household sector is lending less to financial firms, freeing up funds to flow into the Treasury market.*

Obviously, the price that pulls US investors into Treasuries matters greatly. But the basic sources of demand for the huge amount of Treasuries the US is now issuing aren’t really a mystery.

And do also check out Paul’s updated charts tracking the evolution of the current US economic cycle -- and how it compares with an average post-war economic cycles as well as the worst (and least bad, if that makes sense) post war slowdowns. They tell an interesting story.