Skip to main content
Did Natural Gas Save the Pennsylvania Economy?

It’s become popular to point to record low unemployment in North Dakota in order to show how greater oil and gas production could transform the U.S. economy. I’ve argued on several occasions that the numbers simply don’t add up at the national level. Over the past couple days, Paul Krugman has gotten in on the game, hammering away at the fact that the North Dakota case simply doesn’t scale up.

His most recent post takes things a step further, going beyond making claims at the national level and taking on the contention that fracking has helped shield Pennsylvania from the recession. He presents two charts: the first one shows that the scale of the North Dakota and Pennsylvania booms are almost identical; the second shows how these add up very differently in the context of two states of very difference sizes. Hence he concludes:

“North Dakota has had a major employment boom, because 15,000 resource jobs are a big deal in a state with fewer than 700,000 people. Pennsylvania has not; it has done a bit better than the nation as a whole, but that probably has as much to do with the absence of a big housing bubble as with fracking.”

Somewhat to my surprise, the numbers back that up.

The plot below shows two numbers. The unemployment rate in Pennsylvania hasn’t climbed as much as the national rate has. The blue line is my estimate of the number of additional jobs that Pennsylvania would have lost had it followed the national unemployment trend since the recession started. I’ve used a total Pennsylvania labor force of 6.4 million people to get these numbers. The red line is my estimate of the gain in jobs due to the natural gas boom. I start with reported data for employment gains in the mining and natural resources sector. Then I take into account the fact that natural gas jobs spin off other ones: bobs are created in companies that supply the industry and in establishments that serve its employees. Including these indirect and induced jobs is normally misleading, but for an economy well away from full employment, it’s the correct approach. IHS-CERA (in, to be fair, a report commissioned by the gas industry) estimates that every job in the industry drives three jobs elsewhere. Some of these will be in other states, so let’s go with a 1:2 ratio for now. 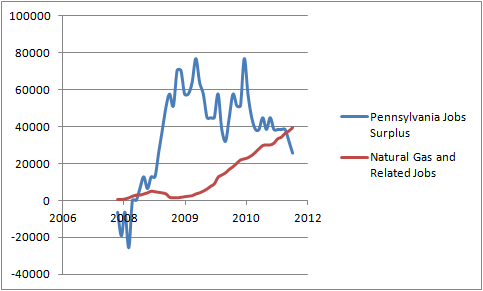 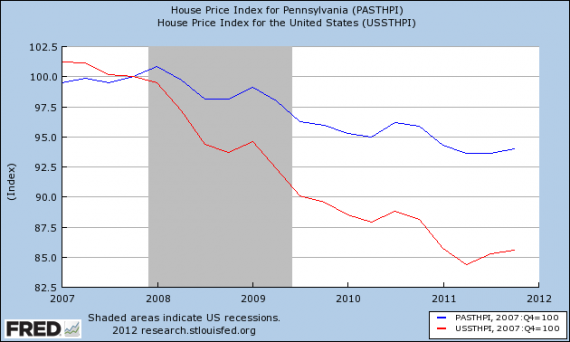 It is indeed housing that appears to have partially spared Pennsylvania. Where natural gas development has become a force is in the last couple years – after the recession officially ended. Yet that’s a period over which the employment gap between Pennsylvania and the rest of the country has been closing.

What’s going on? There’s little question that the gas boom has helped the state grow in the aftermath of the recession. That’s fortunate, because it seems that while natural gas has delivered jobs, something else has been taking others away almost as quickly.

From Tehran with Love