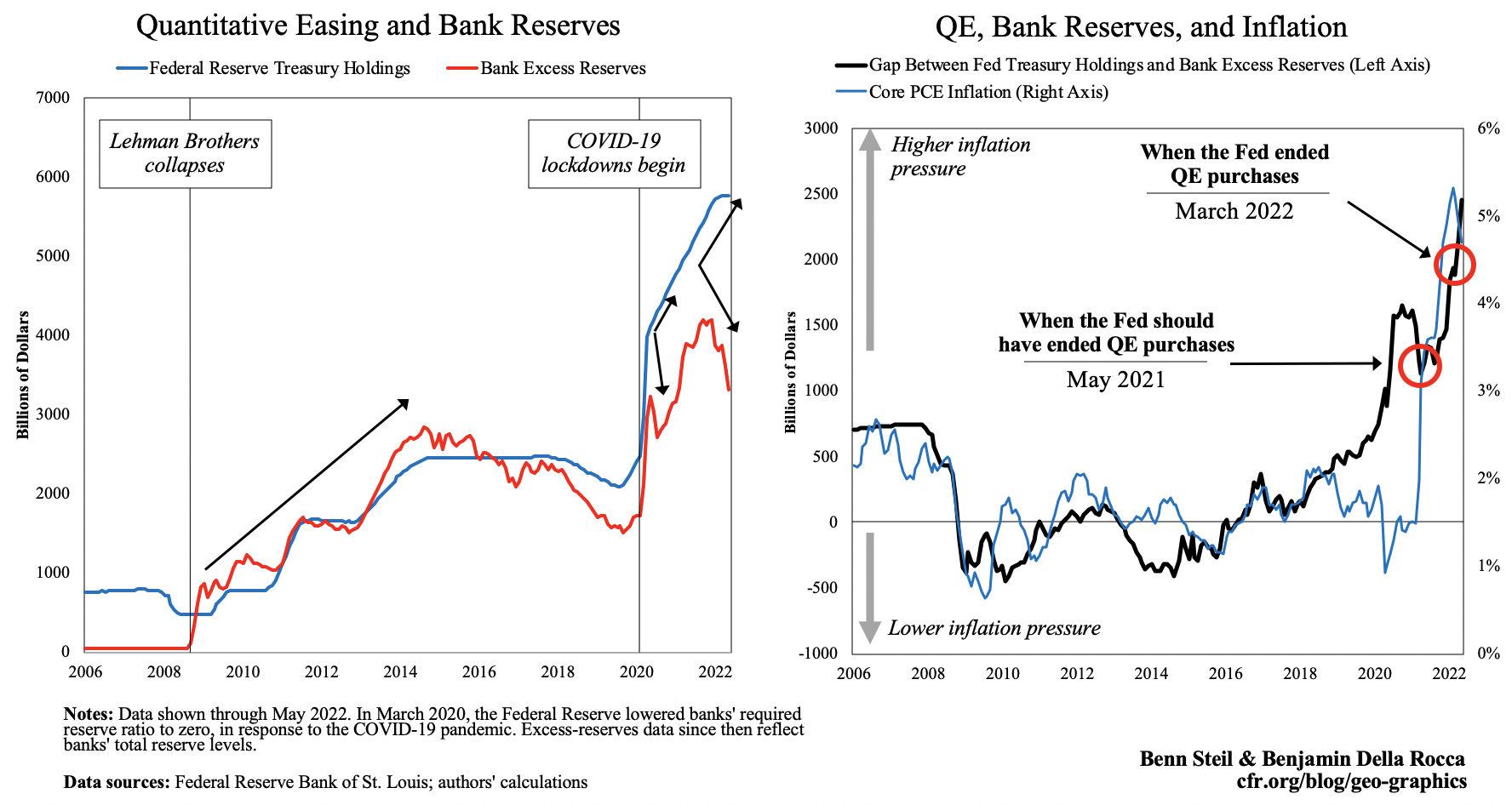 Back in September 2020, the Fed’s preferred inflation gauge (Core PCE) was running at 1.6 percent, and Fed chair Jay Powell was worried about disinflation. The Fed bought up $87 billion in Treasuries and $34 billion in mortgage bonds that month as part of an ongoing strategy to push inflation up to 2 percent.

Many thought the bond-buying wholly insufficient, and called for more fiscal support to avoid “Japanification” of the U.S. economy. But we disagreed, and predicted, on the basis of the Fed’s experience with bond-buying during the Great Financial Crisis (GFC), that the Fed’s COVID bond-buying program would push inflation past 2 percent in February 2021.

We were off by a few weeks. Core PCE inflation passed 2 percent in March 2021—and kept climbing from there.

So what did we see in 2020 that suggested higher inflation in the making? And why does it matter going forward?

Consider, first, why the Fed buys bonds to boost growth and inflation. Bond-buying, or “quantitative easing” (QE), works via the so-called credit channel.  That is, it encourages banks to lend more.  When the Fed buys bonds from banks, their cash reserves at the Fed go up. As that liquidity cushion expands, banks have greater incentive to lend. Cheaper and more abundant credit then encourages more spending and investment.

But banks don’t have to lend more. And during the GFC, they did not. From 2009 to 2015, as shown in the left-hand figure above, bank excess reserves (reserves in excess of those required) rose in tandem with the Fed’s bond-buying. In consequence, inflation stayed flat.

During the COVID-19 recession, however, banks behaved very differently. Between April and July 2020, the Fed bought $321 billion in Treasuries and $200 billion in mortgage bonds. And, as the left-hand figure shows, bank reserves fell by $235 billion. QE was working as hoped.

As the Fed continued its bond-buying, bank reserves began rising again, but not nearly as fast as the pace of the bond-buying. And so, as the right-hand figure shows, the gap between the Fed’s Treasury holdings and bank excess reserves rose sharply. The predictable consequence of this rising gap was inflation.

And inflation we got—inflation that kept on rising through 2021 and 2022, through to the present day.

So where exactly did the Fed go wrong? Well, the falling gap between Fed bond holdings and bank excess reserves between January and April 2021 might have suggested that inflation would come down on its own. But as that gap began rising again in May, with Core PCE inflation running at 3.5% percent, the Fed should clearly have declared victory and ended its bond buying.  Instead, it continued the binge for another 10 months. By that time, March 2022, Core PCE inflation was up to 5.2% percent, and the Fed should have been well into hiking rates.

The lesson for monetary policy is twofold. The first is that QE can and does stimulate lending and inflation via the credit channel. The second is that the gap between central-bank bond holdings and bank reserves is a fairly reliable indicator of where inflation is headed, and that an undesired upturn in the gap is a signal that QE may have outlived its purpose. Central banks must therefore heed the warning of former Fed chair William McChesney Martin, and empty the punch bowl before the party gets going.