18 million Latin Americans—1 in 5 of those between the ages of 15 and 24—neither work nor attend school. Commonly dubbed “ninis” (ni estudian ni trabajan), a new World Bank report looks at this phenomenon across the region.

Latin America’s share falls near the world average—far better than the Middle East and North Africa, where one in three roam the streets, but nearly double the rate of industrialized nations. It also varies by nation. In Peru there are fewer ninis than in the United States, while in Central America over a quarter of adolescents are disconnected.

The majority are young poor urban women who drop out of school or the workforce after a teen pregnancy or early marriage. The men come from similar backgrounds, leaving school for a precarious job market. 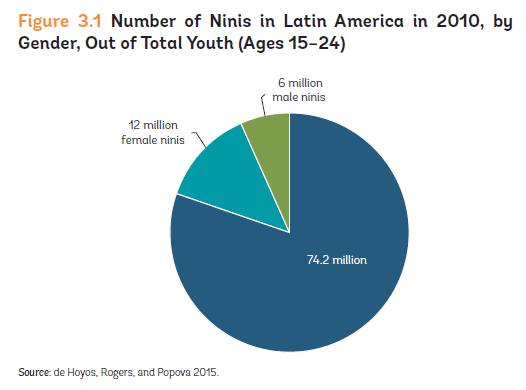 In general, conditions are getting better—the share of ninis fell from 23 to 19 percent of young people between 1992 and 2010. These percentage improvements come almost solely from young women, who now stay in school longer, and, when they do leave, find jobs. For men, those that abandon school struggle to find work, filling the ranks of the 2 million more ninis than in the past.

Latin America’s disengaged youth threaten the region’s economic advancement. Studies show that lifetime earning power dissipates with just a few years out of the workforce, as individuals stop accumulating human capital and skills. Once excluded, many will only find work in the informal sector—where they will earn less, be less productive, and receive fewer benefits. This reinforces the region’s inequality—with most ninis coming from the lower socioeconomic ranks, they and their families will likely stay there. Excluding millions of young people also wastes Latin America’s current demographic bonus. If these countries are to grow rich before they grow old, they can’t have 18 million working age people on the sidelines.

And the disconnectedness links to rising violence, particularly in Mexico, Colombia, and Central America where levels of violence and ninis spiked together. A report by the Wilson Center shows the single most predictive factor of Central American violence is schooling—the more education local youths have the less violent their neighborhood. Broader criminology studies echo this finding—that as education rises crime falls.

For policymakers taking on the ninis problem, one challenge is keeping young people in school. They need to convince kids and their families that school matters, and help support this choice—in the form of conditional cash transfers, scholarships, and other policies—so that children don’t have to choose between the classroom and sustenance. Another challenge is ensuring that when kids graduate they find work. Through job training, entrepreneurship programs, and employment services, governments can help link jobseekers with companies and opportunities. The regional economic downturn, leaving so many more vulnerable, makes a response all the more important.