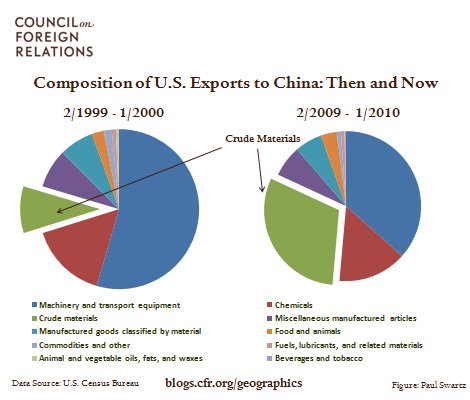 Over the past decade, trade between the United States and China has grown dramatically while also becoming significantly more imbalanced. The United States ran a bilateral trade deficit with China of over $225 billion in 2009, compared with a $69 billion deficit in 1999. One factor contributing to this imbalance is U.S. export controls on certain high-tech products deemed important for national security. As illustrated in the chart above, the United States now exports to China relatively less machinery and relatively more crude materials, such as scrap metal, than it did a decade ago. China’s president Hu Jintao has urged the United States to relax technology export controls for years. The Obama administration is starting to push to do just that, in line with its goal of doubling exports in five years. U.S. Secretary of Defense Robert Gates has bluntly observed that “America’s decades-old, bureaucratically labyrinthine [export control] system does not serve our 21st-century security needs or our economic interest.”

Reuters: Hu Says China Will Stick To Its Own Yuan Path

China Is Not Helping Its Manufacturers