China doesn’t report the currency composition of its reserves to the IMF.  Its reserve total consequently usually appears in the “unallocated” line of the IMF’s data on foreign exchange reserves (The COFER data). 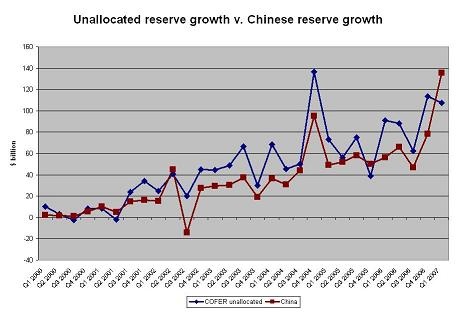 China is clearly the most important country that doesn't report data on the currency composition of its reserves to the IMF, but it isn't the only one -- and the others generally have been adding to, not subtracting from, China's total.   One explanation for the q1 data is that some of these other countries reduced their reserve holdings, offsetting the very large increase in China’s reserves.

But I track the reserve data released by a lot of countries, and I haven’t found many with falling reserves recently -- so I certainly wasn't expecting a big offset to China's reserve growth.   Venezuela’s reserves did dip a bit in q1, but not enough to offset China’s $135b increase.  If any one knows of another country that reduced its reserves significantly in q1 2007, do tell --  the $30b fall in reserves needed to offset China's strong q1 is large enough that it should be relatively easy to find.

The increase in “allocated” reserve reported by emerging economies – that is emerging economies that report data on the currency composition of their reserves was $131.4b.  Another possible explanation for the smaller-than-expected increase in "unallocated reserves" is that some countries started to report the currency composition of their reserves, shifting from “allocated” to “unallocated.”

Clearly something happened.   I like it when various numbers line up.  And right now, they aren't adding up for q1.   Not only was the increase in unallocated reserves in the IMF data below expectations, but the overall number was a bit lower than expected.  The reported increase in the reserves of the countries Christian Menegatti and I track topped the reported increase in the COFER data, which is a bit unusual.   Usually the COFER total is a bit higher, as it picks up more countries.

Nonetheless, the COFER data makes it quite clear that the world's central banks provided the US with a lot of financing in the first quarter.

The COFER data showed a $264b increase in reserves.   I usually add in the increase in the foreign assets of the Saudi Monetary Agency, which brings total reserve growth – absent any adjustments for valuation -- up to $275b.

After adjusting for the impact of valuation changes (the euro rose in value, increasing the dollar value of existing euro holdings, Christian Menegatti and I estimate that total reserve growth implied by the COFER data – on a flow basis – was around $257b.    An estimated $176b of that flowed into dollars, while an estimated $81b flowed into other currencies.

We know that the reporting industrial countries increased their reserves by about $20b, and also increased their dollar reserves by about $20b (think Japan).    The rise in industrial countries euro reserves not explained by the rise in the euro all came from a fall in yen reserves.    The emerging economies that do report added $68b to their dollar reserves, and $58b to their non-dollar holdings – a rather sizeable flow into non-dollar currencies that brought the dollar’s share of their reserves down just a bit.

That slight fall makes sense to me.   We know that Russia now targets a roughly 50% dollar share of its reserves – and India has long maintained a diverse portfolio.  Both were adding to their reserves at a decent clip in the first quarter …

The $176b estimated dollar flow in the COFER data tops the $147b in official inflows in the US data (the US data in theory also includes flows from sovereign wealth funds, but in practice, it doesn't pick them all up -- flows from the Gulf are always a bit on the low side).    However, the increase in dollar reserves implied by the COFER data doesn't exceed reported inflows by much -- which is a bit unusual.

Moreover, the $147b in recored inflows in q1 looked low to me as well, as the increase in the Fed’s custodial holdings of Agencies and Treasuries in q1 ($128b) was higher than the increase in official holdings of Agencies and Treasuries in the BEA data ($106b).    That doesn't make any fundamental sense (though it is explained if some central banks buy in London and then hand their securities over to the New York Fed, as seems to be the case).

All in all, I am a bit confused by the IMF’s data this time around.   The set of countries that I track added $314b to their reserves in q1 ($136b from China).  That total includes Saudi Arabia, absent any adjustment for valuation changes.  But if you take Saudi out, there still was a $301b increase – more than the $264b increase in the IMF data.   And the IMF data set includes more countries.

Combine that with the difficulties finding China’s $135b reserve increase in the IMF data set and I am frankly a bit puzzled.    I was expecting a somewhat stronger number.

Remember, the growth in the FRBNY’s custodial holdings accelerated sharply in q1 -- something that generally indicates an acceleration in overall reserve growth.  I am not as convinced as Terrence Keeley of UBS that Asia and the Middle East are unwilling to put their reserves in euros -- those countries that have been willing to finance aging europe rather than aging America have been rewarded, and far more countries are increasing their euro and pound allocation than increasing their dollar allocation.   But I fully share his assessment that there has been a lot of central bank buying of dollar bonds this year -- at least until June, when there does seem to have been something a slowdown. 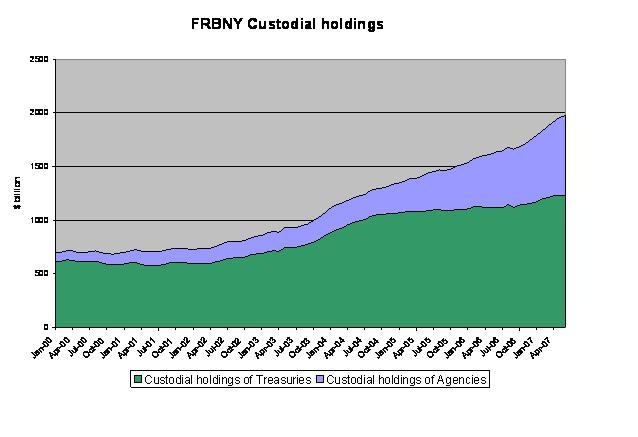 I am digging a bit deeper – I want to understand why China’s $135.7b q1 increase doesn’t seem to appear in the IMF’s data.  If I find out something, I’ll let you know.