Egypt is no stranger to radicalism and terrorism. It was the poor treatment of Islamist prisoners in Egypt in the 1950s and 1960s that produced Ayman al-Zawahiri and gave rise to al-Qaeda’s philosophy. That mistake of mass arrests, prison torture, and social isolation of Islamists in Egypt is being repeated before our eyes. 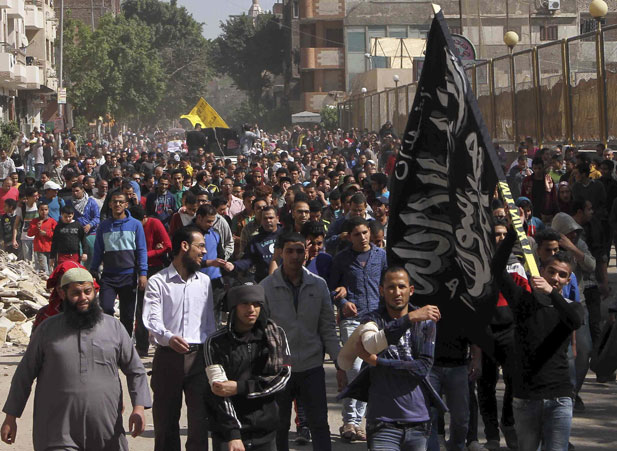 The Brotherhood is also not a monolithic organization; its internal strands include conservatives, radicals, pluralists, and liberals. The actions of the Egyptian government currently overlook these ideological and other divisions within the Brotherhood, instead placing them under a single label: "terrorist organization." Furthermore, in trying to contain terrorism, Egypt is only fueling the radicalism and extremism that will lead to greater terrorism in the coming months.

Unless the United States and its allies in the Middle East press to correct the ongoing errors of the military-backed Egyptian regime, its short-sighted measures will blow back in the form of increased anti-Americanism and the growth of terror attacks in the region and beyond.

Islamism is a political force that exists in the Middle East. It cannot be eradicated by force. The leader of the Muslim Brotherhood today, Mohammed Badie, is the same man who helped smuggle Sayyid Qutb’s works out of prison. Qutb’s writings—especially his book Milestones, for which he was subsequently hanged in 1966—were not only seditious texts as viewed by the Egyptian government, but broke with mainstream Muslims scholars in calling for the overthrow of the military regime led by Gamal Abdel Nasser. Qutb framed his personal and political woes in religious justification: How could a government that persecuted and horrendously tortured those he considered "pious Muslims" also be Muslim? On the basis of his experiences of torture in prison, he rendered the then-Egyptian government as jahiliyyah, a system fraught with pre-Islamic ignorance. It followed that a jahili system could be overthrown by any means necessary.

It was Qutb, a Muslim Brotherhood member, who laid the intellectual foreground for an imprisoned al-Zawahiri and others to break away from the Muslim Brotherhood and form Gamaa al-Islamiyya in the 1980s. Qutb was not alone; that experience in prison also led to Zainab al-Ghazali writing her book, Return of the Pharaoh, a depiction of Nasser being a non-Muslim "pharaoh" and therefore a legitimate target of mass Muslim jihad against the government.

These books are not abstract academic tomes, but bestsellers in the Arab world.

Those experiences of the 1960s through 1980s led to the formation of Gamaa al-Islamiyya and terrorist incidents up and down the Nile. The 1990s saw the merger of Egyptian extreme Islamism with Saudi extreme Salafism in the creation of al-Qaeda. Once again, we may be witnessing the birth of a movement from the suffering of the Muslim Brotherhood in Egypt’s prisons, but the scale of the government’s current crackdown on the group is much wider than before. In Nasser’s time, thousands were arrested and several sentenced to death. Today, by contrast, almost ten thousand Islamists are in prison, and reports of their leadership being tortured and denied of medication are commonly held across Egypt.

Political Path for the Brotherhood?

I met with Muslim Brotherhood leaders repeatedly over the last four years. They struck me as political novices, yet hungry for power and status in an effort to control the Egyptian state. To that end, they created the Freedom and Justice Party (FJP), but the leadership was split down the middle as to whether they should run for the presidency. Badie’s view was firmly opposed to any Brotherhood member running for presidency. He was overruled by younger enthusiasts. This plethora of views exists within the Brotherhood. In 2012, Mohammed Morsi marginally won the presidential elections in a runoff. Within a year, Badie was vindicated: the Brotherhood was not prepared to govern.

Several of the leaders I met were pro-Western, pro-free market, and desired a more liberal agenda within the Brotherhood. Those elements still exist inside the leadership, but the actions of the Egyptian government continue to disempower them and strengthen the hardliners. There are signs that the Brotherhood accepts it made mistakes during the Morsi presidency. There is new open talk of emulating the pluralist, modernist Islamist leader Rachid Ghannouchi in Tunisia, founder of the country’s Ennahda Islamist party. Gamal Heshmat, a Brotherhood spokesman, said recently the Brotherhood seeks a political agreement in Egypt like that which Ghannouchi achieved for his party in Tunisia. "We will extend our hands to every decent revolutionary who takes sides with democracy and freedoms," he said. This opportunity should not be missed.

There is much reform work to be done within the Brotherhood, suggestions for which I outline in "Reforming the Muslim Brotherhood," yet the Egyptian government, the United States, and its allies can and should take steps to help it in the right direction.

The Egyptian government’s current treatment makes no difference between al-Qaeda extremists in the Sinai Peninsula and tens of thousands of Muslim Brotherhood members around the country. This is not only dangerous to Muslim Brotherhood members who are nonviolent, but fails to delineate between genuine terrorists and nonviolent political activists. Realistically, this creates more of a burden for Egypt’s military domestically, but more broadly this fuels the narrative that nonviolent Muslim activists or political Islamists are all seen as terrorists on the international stage. Many radical Islamists, including al-Qaeda, then ask their more moderate cousins why they bother with democracy when they will be painted as terrorists regardless. This is neither an academic nor a sophisticated argument, yet many young people in Egypt will be drawn to this jihadist narrative: If both violence and nonviolence result in prison, at least the violent, jihadist approach is more effective in removing "God’s enemies."

Avoiding a Spiral of Violence

What steps are needed to improve the situation?

First, we should not underestimate the seriousness of the threat of the sentences. Even if the mass executions do not occur as mandated, a new narrative is emerging among Islamist groups globally that the West and its allies are silent in the face of Islamists being arrested and tortured en masse. Mild words or silence from the White House, U.S. State Department, British prime minister, and European Union only lends credence to this view. This narrative feeds al-Qaeda’s appeal in the region. The United States and European Union ought to reach out to Egypt’s military to rein in the judiciary. They should exercise both private and public pressure to ensure that the appeal goes ahead, those issued death sentences are not killed, and ten thousand or more political prisoners are released, though not without conditions.

Second, the United States and the EU should work closely with the Emiratis, Saudis, Kuwaitis, and Bahrainis to persuade them that suppression of Islamists is not a long-term strategy. It is more productive to open a secret channel of negotiation with Brotherhood leaders in prison while they are open to reform. The Brotherhood has proved to be practical in the past, and that vein in its leadership exists. A deal can be struck with Mohammed Badie or others inside the organization that ensures the more pragmatic, non-ideological elements of the leadership are released from prison to focus on their social activism, welfare work, and other civil society activities without trying to overturn the Egyptian state. This would amount to a win-win situation: the Brotherhood would no longer pose as large a threat to the Gulf, and the Brotherhood could rebrand itself as a force working for social good within the country.

Third, respected Muslim scholars in the region, including those from Cairo’s Al-Azhar University or Sheikh bin Bayyah, a regional influencer, should play the role of intermediary between the military and the Brotherhood to redirect the Brotherhood’s ideology within mainstream Islam, rather than becoming further isolated and radicalized. After all, Egypt mufti Shawqi Allam is legally responsible for signing off on the death sentences. This clerical authority should be used as leverage to dissuade the Muslim Brotherhood from confrontation and statist Islam.

Finally, those elements within the Muslim Brotherhood who are openly supportive of violence or from whom there is evidence of involvement in killing police officers and attacking ministries should be served justice and remain in prison. But the several thousand who are not violent and the many others who were killed in Rabiya al-Adewiya protests in Cairo last summer deserve to be compensated.

This dark chapter in the history of the Muslim Brotherhood can be turned around. Moreover, there is an opportunity for the Egyptian government, with pressure and support from the United States and other allies, to have a constructive say in redirecting the efforts of the Brotherhood.