The Paris Agreement on climate change, accepted by 195 countries in December 2015, creates a new framework for reducing global greenhouse gas emissions in which each country sets its own voluntary targets, to be ratcheted up every five years. On April 22, 2016, the accord opens for signing at the UN headquarters in New York, but this is only the beginning of the process, says CFR Senior Fellow Michael Levi. "The Paris climate talks resolved some very important issues, but left some equally important ones to future summits," he says. At the same time, political volatility around the world, uncertainty over the legality of U.S. carbon regulations, and plunging oil prices have all complicated the climate picture. 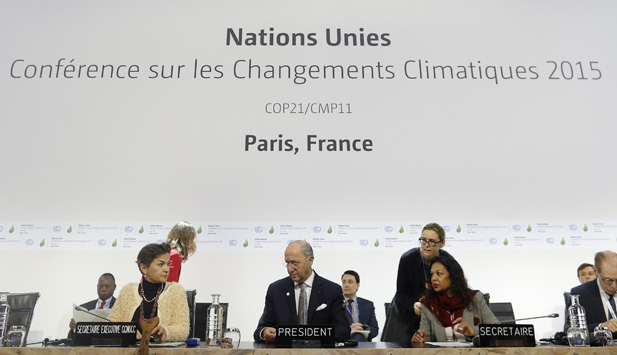 More than 150 countries are set to sign the Paris Agreement on Friday. What is the significance of this signing?

The signing is mostly symbolic. It’s a necessary step on the way to bringing the Paris Agreement into force. But it shouldn’t come as any surprise that most countries will be signing the agreement this week, since all countries agreed to the deal back in December at the Paris talks.

There’s been a lot of bad news recently about climate, from reports that this past winter was the warmest on record, to indications of unprecedented melting of the Greenland ice sheet. Is there a growing sense that the Paris accord may not go far enough?

The Paris Agreement lays out two different temperature targets: to limit the global temperature increase to no more than 2 degrees centigrade and, more ambitiously, to 1.5 degrees centigrade. Both are incredibly difficult to reach, and well beyond the current collective efforts of countries. I don’t think any of the recent news is going to make anyone revisit those goals, because those ambitious targets were based on an understanding that the climate problem is getting worse. 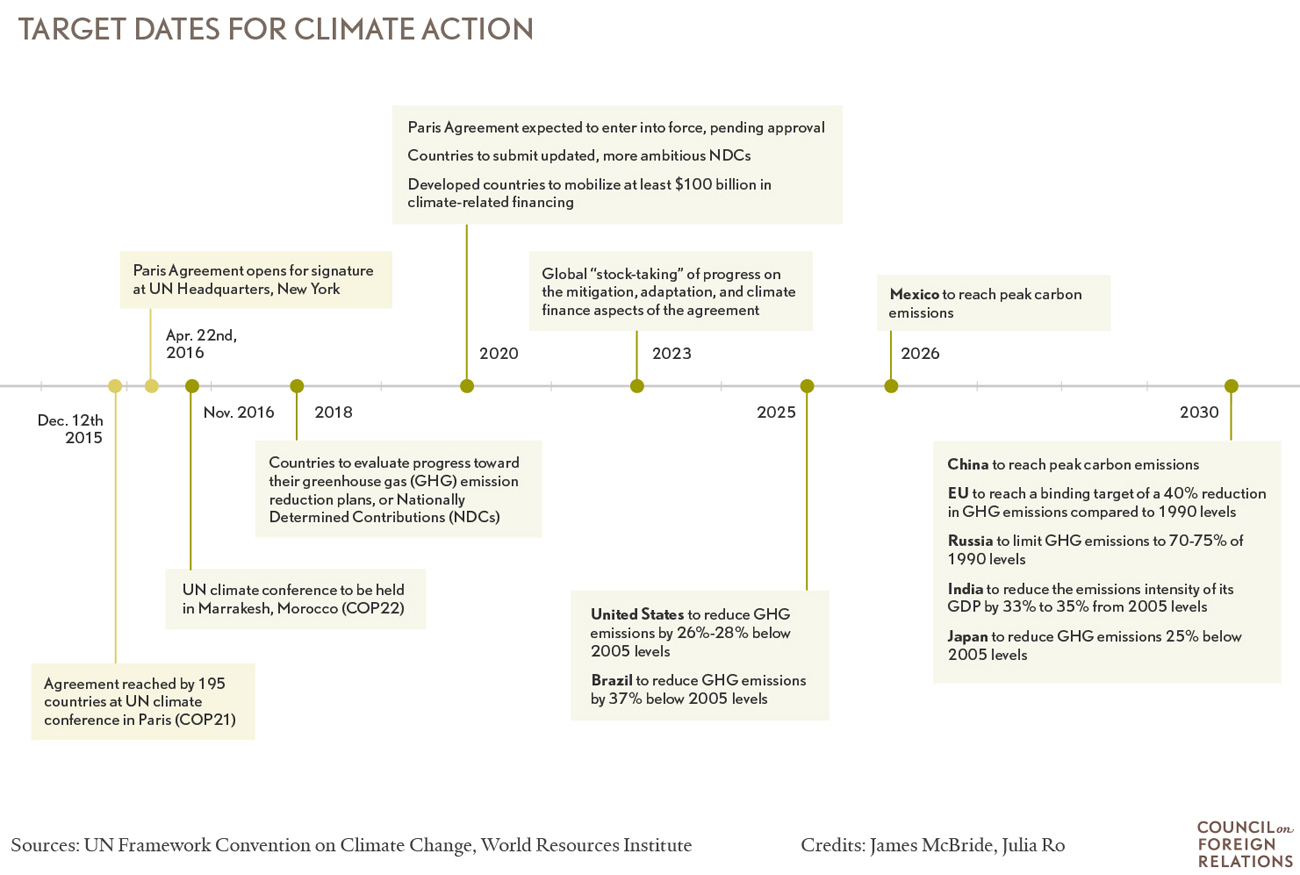 There was also an understanding going into Paris, and coming out of it, that the collective efforts of the countries involved were insufficient to meet the climate change challenge. That’s why the Paris Agreement puts so much importance on updating countries’ efforts over time. As we learn more about what works and what doesn’t, and as climate politics change—ideally for the better—countries can update their contributions and do more.

And in the U.S. context?

In the United States, you have a feisty political season, which isn’t a surprise. One big thing that’s happened in U.S. energy policy since the Paris Agreement is that Congress passed a budget bill in late December that extended tax credits for wind and solar. That only makes it more likely that the United States will meet its Paris goal.

"The fate of the Clean Power Plan is a big question mark hanging over the future of U.S. compliance with its Paris commitments."

The other big change involves the Clean Power Plan [the Environmental Protection Agency plan for reducing carbon emissions from power plants]. Its future is more uncertain than many people thought it was going into Paris, though I think its legal vulnerabilities should have been a little more apparent to some observers. The fate of the Clean Power Plan is a big question mark hanging over the future of U.S. compliance with its Paris commitments.

That fate is in question partially because the Supreme Court put a stay on the plan’s implementation while the legal challenge, led by a group of more than twenty states that say the regulations exceed the EPA’s authority, makes its way through the lower courts. When might that be resolved one way or another?

We don’t know when and how the legal challenge to the Clean Power Plan will be resolved. Whichever way the [U.S. Court of Appeals for the District of Columbia Circuit] decision goes, that will be challenged at the Supreme Court. And if there’s a 4–4 decision at the Supreme Court, all that means is that similar suits can be brought in the future and the Court’s decision creates no precedent and could leave the plan in something of a suspended animation.

How will that uncertainty likely change the United States’ implementation? Could it cause other countries to hesitate over their own plans?

I don’t think that’s such a big driver. To the extent that the United States falls short of its goals, there will be players in other countries that don’t want their governments to make deep emissions cuts, and they will use that as a talking point. But that will be only one of many pieces in their own domestic political debate.

The Clean Power Plan is considerably less central to the United States meeting its 2020 goals than it was before the wind and solar tax credits were extended. There is also a potential dark horse policy in the United States, and that’s the future of the fuel economy regulations for cars and light trucks [the EPA and Department of Transportation’s Corporate Average Fuel Economy (CAFE) standards], which are in the early stages of a review that will culminate next year.

You mentioned the campaign. How much will the next U.S. president be able to either roll these climate policies back or move them forward?

A lot. I think three things are important. First, the fate of the Clean Power Plan probably rests on decisions made by the next president—whether those are decisions about how vigorously to defend it in court or how aggressively to implement and enforce it.

Secondly, the next administration will make the decision about what to do with U.S. fuel economy rules.

On top of all of that, it’s broadly agreed that existing U.S. rules won’t be enough to reach the commitments that the United States made in Paris. So the next administration’s decisions will determine whether the United States meets those goals.

The short answer is that it’s complicated. The collapse in oil prices has dragged down natural gas prices in the United States. That makes the competitive environment tougher for zero-carbon electricity. But it also makes it tougher for coal. And you’ve seen both coal bankruptcies and renewable energy bankruptcies, driven mostly by other factors but not helped by the low price of oil. The net impact on emissions is tough to determine in that case.

The low price of oil will also complicate the review of the fuel economy rules. It is already shaping decisions about vehicle purchases—whether to buy small or large cars or trucks. So that has a real impact.

"The biggest changes that will influence climate policy may have less to do with climate change or energy itself, and more to do with broader political currents leading to changes in leadership."

But on the electricity side of things, most zero-carbon energy adoption is driven first by politics and technology, and only second by the price of natural gas, which is influenced indirectly by the price of oil. There is no meaningful contribution of oil to power generation in the United States. Elsewhere in the world you have to look at this interplay on a country-by-country basis.

We talked already about China and the United States. Are there any other major emitters whose situation has substantially changed since the December Paris Agreement?

Brazilian politics has, to say the least, not been smooth since the Paris Agreement. Things are always bumpy in Russia. Europe is going through its own growth challenges. The biggest changes that will influence climate policy may have less to do with climate change or energy itself, and more to do with broader political currents leading to changes in leadership that subsequently have consequences for climate change.

As part of the UN process, developed countries pledged to put together a $100 billion climate fund for developing countries. Do we know any more about where that money is going to come from or how it’s going to be deployed?

In 2009 [at the Copenhagen climate conference] the wealthier countries agreed to mobilize up to $100 billion a year to help developing countries with low-carbon transitions and adaptation to climate change by 2020. But there was never a single fund imagined at that level. Countries disagree sharply over whether the world is on track to meet the goal, in large part because they have very different definitions of what kind of money counts. I doubt there will ever be a closing of that gap, simply because different countries have different reasons to set their own definitions of what counts.

I do think that, in the next year or two, the question of financial transfers will come back up in the broader climate talks. This is one thing that’s essential to remember: The Paris climate talks resolved some very important issues, but left some equally important ones—including financial transfers and the details of transparency, verification, and review—to future summits.

Is that going to be the focus of the next climate summit this November in Morocco?

We’ll have to wait and see what the focus is. But I suspect that it will be a mix of finance, transparency, and efforts to bring the Paris Agreement into force. Before the deal can take full effect, it must be ratified by countries representing at least 55 percent of global emissions.

Beyond Paris and the UN framework, are there other international efforts to be watching?

Part of what’s smart about the Paris approach is that it doesn’t try to solve everything by itself. It’s supposed to be a framework within which all sorts of other efforts operate.

"Part of what’s smart about the Paris approach is that it doesn’t try to solve everything by itself."

So people should be watching, first of all, efforts within countries, whether that’s the United States, China, Brazil, or elsewhere. Then there are the international organizations that affect actual commerce in energy-intensive industries or low-carbon energy. That might be World Trade Organization decisions on subsidies and tariffs for solar panels. It might be World Bank decisions about what kinds of power plants they’re going to fund. It might be the [Asian Infrastructure Investment Bank] policy toward coal. Those sorts of decisions made by international organizations are as important as these framework decisions that are part of the Paris Agreement.