Brazil’s latest opinion surveys show President Dilma Rousseff and Socialist Party candidate Marina Silva tied in the first round of presidential election voting, on October 5, and place Silva ahead of Rousseff in the second round. Silva seems to be raising hopes that she can more effectively respond to rising criticism about public services, corruption, and inequality, says expert Matias Spektor. Whomever is elected president, he says, will likely continue to rein back Brazil’s ambitious foreign policy as charted by Rousseff’s predecessor, Luiz Inácio Lula da Silva. 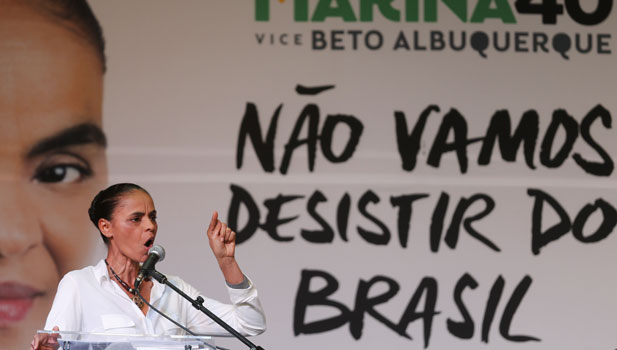 Polls show President Dilma Rousseff and challenger Marina Silva tied in their bids for president. What are the differences in their campaign platforms?

There is a sense that Marina will try to respond to the demands that came about with the protests in June last year. These demands are relatively broad and do not refer to Brazil’s economic performance even [though] this month we’ve entered a recession.

Marina is structuring her campaign around the promise that she will respond to these demands in ways that the current administration hasn’t. She’s never actually pinned down what this means beyond bringing to power a coalition that is not led by the PSDB (Brazilian Social Democracy Party) or by the PT (Workers’ Party), the two parties who’ve led successive administrations for the past twenty years. Thus far all she’s got is a promise to attend to the demands of the electorate, especially the young Brazilians who went out on the streets last June and are now the key swing voters.

This is a campaign about public services. It’s a complaint about the gentrification of city centers and the new politics of inequality inside cities.

There are more differences on economic policies. The Dilma Rousseff campaign argues for a bigger [state] presence in the economy, but they’re arguing over details of the degree to which the state should regulate the market.

All three candidates [Aecio Neves of PSDB is the other] promise economic stability—that means low inflation—with some degree of redistribution through government handouts to a population that, to this day, remains largely poor.

All of them are committed to curbing inequality inside Brazil, which is the dominant theme and has been for Brazilian democracy for twenty years now. [This] puts Brazil apart from the other BRICs, which have seen a rise in inequality lately, and it actually puts it apart from the United States and Europe as well. There is no political space in Brazil at the moment for a leading politician to promise or suggest otherwise.

Dilma enjoyed 65 percent approval ratings little more than a year ago. Today her support has fallen by half. Why?

There are three major reasons. One of them is [that] the government was taken aback by the protests last year and it failed to respond. There has been no response to any of the big demands that bubbled up in June last year.

The [second] is economic performance. Even if Brazil retains very low levels of unemployment—technically, we’re a full-employment economy, and even if salaries have grown systematically over the past few years, inflation has picked up. The economy is stagnant.

The brunt of things is going to be felt next year when stagnation translates into rising levels of unemployment. But people can feel it at the moment because we have economic stagnation with inflation—what the United States [called] stagflation in the 1970s.

And that climate has meant that a big chunk of the power brokers that supported the PT government—banks and the private sector-industry—are unhappy. They are very ready to jump ship if an alternative comes about that promises an economic policy that will curb government expenses, restore the power of the regulatory agencies, and open up the economy a bit more to get economic growth restarted.

Third, there is a sense that the PT government, after twelve years [in power], has become a party like any other Brazilian party in the sense that the promise of clean politics, of progressive policies across the board, has not come about because of the compromises that they have had to [make] to govern the country in a fractured parliament.

Why is Brazil only feeling the effects of the global economic crisis now?

In his second term, Lula had an expansionary economic policy, and when the crisis hit in 2008, Brazil’s purse was still packed, and Lula decided to prevent a recession from hitting Brazil by [initiating] quantitative easing in a massive scale. So money poured into the economy. Of course, the end result of that is only felt under Dilma. That’s a rise in inflation.

And in that sense, the World Cup and its big infrastructure projects [compounded] some of Brazil’s core problems. On the one hand, public money was used to subsidize private enterprise. On the other hand, you had corruption scandals popping around this big infrastructure work.

There was a sense that the political class was completely detached from the people: many of these stadiums were unnecessary, they were built in places [where they] will have no use at all after the World Cup. Money was not used to try and improve citizen security and quality of life in big Brazilian cities.

The expense of these stadiums was bigger than had been anticipated and, on top of that, during the month of the World Cup Brazil virtually stopped economically.

Can any of the candidates prevent a rise in unemployment at this point?

So the question is: Can the next president drag us out of recession? And that is never an easy answer, partly because Brazil is so hard to reform. There are so many veto players within the Brazilian polity.

Also, Brazil remains fundamentally dependent on the fate of global capitalism. A reduction of growth in China will have a direct impact on two hundred million Brazilians. The restoring of growth in the United States and a possible rise in interest rates on the part of the [U.S. Federal Reserve] would have a direct impact on Brazil’s ability to attract foreign investment.

Foreign policy language [in the next administration] will be less about possibilities and more about limits.

What else will the next president have to address?

But this is now, for most Brazilians, a major theme alongside employment and salaries and inflation. Poll after poll shows that Brazilians are afraid of going out of on the street. And it’s not just in big capital cities; the drug issue and [small firearms] issue has become a major theme for small Brazilian towns in the interior. And that’s what’s going to push this theme into the concerns of the federal government.

[Another issue is] public transport. At the moment most large cities face major transport challenges in terms of both cost and accessibility—public transport is expensive and fails to provide access to poorer Brazilians living [outside] major city centers. This is mostly municipal and state [policy]. But the demands, when they bubble up, translate into criticism of federal government.

Lula made Brazilian diplomacy a centerpiece of his presidency. How has Dilma’s presidency prioritized foreign policy?

Lula increased Brazil’s presence in the world. He opened up [embassies across Africa]. [He oversaw] the largest military deployment in Brazil’s history after the second World War, which is the current MINUSTAH [peacekeeping] operation in Haiti. He very much tried to play a leading role in the [World Trade Organization’s] Doha Round. He was a part of the creation of the G20, and in [mediating] the global financial crisis. And, of course, he tried to broker an agreement with Iran. So in a sense it is only normal that the president coming after him would see some kind of retraction.

The 2000s were a moment of global opening to Brazil partly because the global economy benefited Brazil. But also after the Iraq war there was a global demand for alternative voices, and Lula managed to ride that wave. In 2003, he was the leader of the most important left-wing movement in the world. At a time when there was real demand in Europe, elsewhere in Latin America, in the Middle East, in Asia, for a leadership alternative to George W. Bush, Lula managed to play that role without actually alienating Bush.

The U.S.-Brazil relationship in the Lula years was rather good, all the way up to the Honduras crisis in 2009 and the Tehran Declaration. But that was with the Obama administration.

So it has partly to do with the personality of the president, but to a very large degree, it’s to do with the state of the world. Room for maneuver for Brazil shrank, but it’s not necessarily Dilma’s fault.

What do you see as diplomatic priorities for the next president?

There will be a push at the beginning of the next administration to restore relations with the United States after the [NSA leaker Edward] Snowden revelations, which sit very hard.

Irrespective of who wins, there will be an attempt to make MERCOSUR more flexible, giving Brazil greater space to negotiate free trade agreements with the European Union, mostly, but also with Andean countries in South America. I don’t think we’re going to see a bout of political activism in the UN. I don’t think we’re going to see an awful lot of activism on the Africa front or the Middle East front.

Because of the state of the economy and the sense that the next administration will have to respond to the [domestic] demands made in June last year, foreign policy language will be less about possibilities and more about limits.

A global pandemic, elections, civil unrest, and much more. The year 2020 was like no other. Take a look back at how the Council on Foreign Relations brought together renowned experts and leaders to unpack one of the most challenging times for the United States and the world.

The World Waits for No Country

While the United States has turned inward, focusing primarily on domestic challenges, history has not stopped.