The $60.9 billion monthly April trade deficit was the largest monthly deficit since last March. So much for the notion that the trade deficit has turned the proverbial corner.

That is the average price of US imported petrol in April.

And it is about $30 a barrel below the current market price for petroleum. The deterioration in the US petroleum deficit isn’t over.

If the average price of imported petrol stabilizes at $125 a barrel (the US imports a fair amount of heavy crude so its average import price is below the market price for sweet light crude, the US petroleum import bill will rise from a bit under $320 billion in 2007 to around $520 billion in 2008.

Note though that the improvement in the non-petrol deficit has stalled just a bit. That is something to watch going forward.

Unless something changes, the US trade deficit is set to increase in 2008. Yes, increase. The improvement in the non-petroleum deficit, on current trends, won’t be enough to offset the $200 billion rise in the petroleum deficit.

That deficit isn’t financed by private capital flows either. Accurate data on official flows isn’t available (the US data understates official inflows). But I am confident that the increase in the assets of central bank and sovereign funds is on track to be around $1.5 trillion in 2008 – evenly split between the oil exporters and China. Even if only half that increase is held in dollars, it would be roughly enough to finance the US deficit if private inflows and outflows balanced. No one can credibly argue that the large US deficit is a fully market outcome, one produced by strong private demand for US assets.

The rest of the data release was fairly balanced, with goods news on exports offsetting a rise in non-oil imports. Non-oil export and imports both rebounded from their March lows in both nominal and real terms.

Real goods export growth – on a year over year basis – looks fine. The dip in real goods exports that worried me a couple of months ago wasn’t confirmed in the April data. Note that real non-oil goods import growth is very weak -- with negative y/y growth. That is consistent with Dr. Chinn’s views about the current health of the US economy. 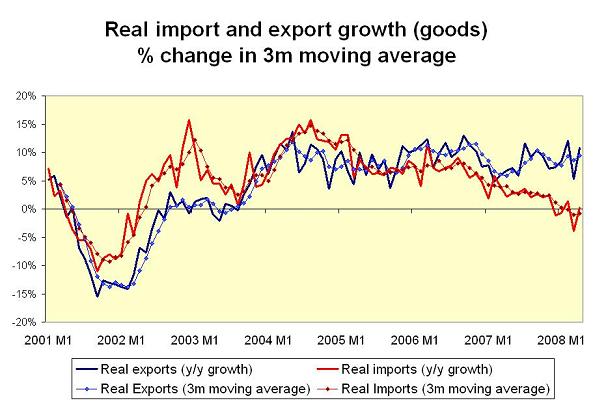 And the real non-petroleum and petroleum deficit are both improving. 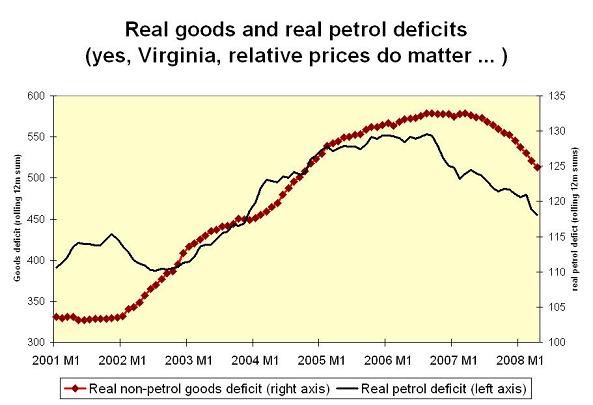 Ngozi Okonjo-Iweala: A Well-Qualified New Leader for the WTO