The facts about the humanitarian situation in Syria are well-known: A minimum of 160,000 people have been killed. About 6.5 million Syrians have been forced to leave their homes and are displaced inside Syria, and 2.7 million are refugees in neighboring countries—altogether, nearly half of Syria’s population of 22 million. The refugee burden on neighbors is immense: There are a million Syrian refugees in Lebanon, whose population is only a bit over 4 million, and 600,000 registered in Jordan, with a population of just over 6 million. These official refugee figures may be far lower than the real numbers (there are probably over a million refugees in Jordan), and do not begin to express the misery in which so many Syrians now live.

Can Iranian Drones Turn Russia’s Fortunes in the Ukraine War? 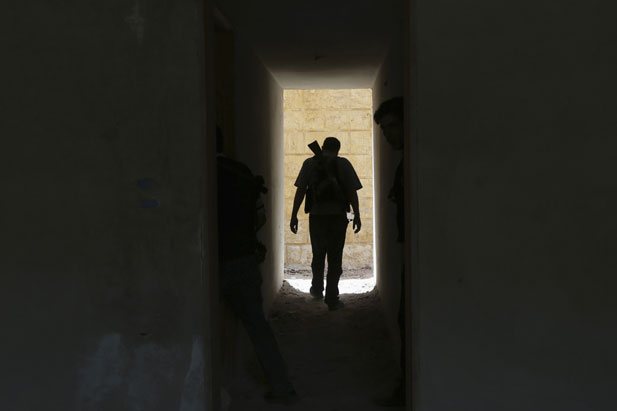 A rebel fighter on the frontline of the Mleha suburb of Damascus, June 7, 2014. (Photo: Bassam Khabieh/Courtesy Reuters)

The refugee flows and the jihadi presence, which are both growing, constitute a threat to Syria, its neighbors, and the interests of the United States. Today, foreign fighters from around the globe are said to number anywhere from 8,000—the estimate given by Gen. Lloyd Austin, U.S. Central Commander—to 12,000, and several of the groups are linked to al-Qaeda. The Secretary of Homeland Security, Jeh Johnson, said in April 2014 that "Syria has become a matter of homeland security," and the Director of National Intelligence, James Clapper, said in January 2014 that one of the al-Qaeda-aligned Syrian jihadi groups "does have aspirations for attacks on the homeland."Among the foreign jihadis now fighting in Syria there are believed to be seventy Americans.

The U.S. government’s reaction has been almost entirely humanitarian, through aid to neighboring countries and to various UN and private agencies. Soon the total will reach $2 billion.

Can Iranian Drones Turn Russia’s Fortunes in the Ukraine War?

President Obama has been extremely reluctant to lift U.S. involvement from the humanitarian and diplomatic to the military. His 2012 decision against military aid to the Syrian rebels was made against the advice of his top national security officials at that time, including Secretary of State Hillary Clinton, CIA Director David Petraeus, Joint Chiefs Chairman Martin Dempsey, and Secretary of Defense Leon Panetta. His last-minute decision in August 2013 not to strike Syria after its use of chemical weapons was popular in the Pentagon and with the public, but clearly went against advice from Secretary of State John Kerry.

In June 2013 the administration announced the provision of some aid to the rebels, but from all evidence little or no material help actually followed. Finally in late May 2014, the president himself announced in his speech at West Point a decision to give additional aid to the rebels: "I will work with Congress to ramp up support for those in the Syrian opposition who offer the best alternative to terrorists and brutal dictators."

The Price of Inaction

U.S. policy since the start of the rebellion in Syria in 2011 has failed. Regime brutality against the majority-Sunni population of Syria and intervention by foreign Shia forces (Iranian and Hezbollah) have attracted a far larger and more dangerous group of jihadis than ever existed in Afghanistan, one whose threat to U.S. allies and interests keeps growing. That the Iranian and Hezbollah intervention has elicited no serious U.S. response has not only favored the regime’s survival, but shaken faith in American reliability among all U.S. allies in the region and beyond.

That Iran has appeared far more determined to win in Syria, defined as keeping Assad in power, than the United States has appeared in achieving its stated goal (that Assad must go) similarly shakes confidence in U.S. power and willpower. The huge and growing refugee burdens threaten stability in Jordan, long a key U.S. ally, and in Lebanon. And the fact that Assad is an Alawite trying to rule a 74 percent Sunni country suggests that with him in power there will never be stability, only more war.

Less tangibly but of equal importance, U.S. willingness to enforce the norms of international conduct has been undermined, as has American moral leadership. The association of the United States with the cause of human rights and democracy, going back at least to Woodrow Wilson, has been weakened by its unwillingness to act in the Syrian case. America’s soft power is linked to its reputation for idealism and the defense of human values. The refusal to use hard power in the Syrian case has contributed to a diminution of soft power as well.

The early goal of a quick departure for Assad and transition to democracy in Syria is now impossible to attain. More disorder and suffering are certain. But Syria need not be an endless source of refugees, a center of inhuman suffering at the hands of a vicious minority regime, and a worldwide gathering place for jihadi extremists.

First, the United States must establish a serious program to train and equip the rebels. Diplomacy has failed: the efforts made by the United States in Geneva to reach a political accord cannot now succeed, because diplomacy will always reflect the power relationships on the ground. Those must be changed by strengthening the anti-Assad, anti-jihadi forces composed of nationalist Syrian rebels.Their weakness is largely linked to their possession of very limited amounts of guns and other equipment, and limited amounts of money with which to pay fighters, while jihadi groups appear to have far more of both.

The balance of forces will change when anti-jihadi groups can arm and train all the men they can attract, including attracting them from other forces to which they have gone because those forces were able to feed and clothe them and supply modern weapons. Without such a fighting force, there is no hope that the power of the regime or the jihadis can be countered.

Second, the United States should punish Assad for the continuing use of chemical warfare. This means an air strike robust enough to damage CW targets, including units that have used CW and any air assets ever used to deliver them. Any strike should at this point be broad enough to greatly restrict Assad’s ability to use air power as an instrument of terror. More broadly, punitive air operations should be considered to force the regime to allow humanitarian aid to quickly reach those who need it. And even more broadly, air strikes can both change the military balance on the ground and affect the political and psychological dimensions of the conflict by demonstrating a new American policy and new determination.

As Anne-Marie Slaughter, director of policy planning in the State Department in Obama’s first term, wrote in April 2014, "A U.S. strike against the Syrian government now would change the entire dynamic. It would either force the regime back to the negotiating table with a genuine intention of reaching a settlement, or at least make it clear that Assad will not have a free hand in reestablishing his rule."

Is such use of American air power feasible? Yes; outside of the Damascus area air defenses are quite limited and so would be the risk to the United States. This conclusion is supported by Israel’s series of successful air attacks on Syria without losing one aircraft.

Third, the United States and other donors are still not delivering sufficient aid to Jordan and other neighbors of Syria to enable them to cope with the refugee crisis without severe political and economic strains—for example, on schools and hospitals. The United States and its Gulf allies, some of who are actively funding rebel groups in Syria, should undertake a serious joint review of Jordan’s needs, and then act together to meet them. At West Point, the president pledged to do so.

Fourth, the United States should make it clear to allies in the region such as Israel and the Gulf Arab states that any nuclear deal with Iran will stop it from developing a nuclear weapon but will not stop Washington from confronting Iranian subversion and aggression—such as its sending hundreds of Revolutionary Guard and Quds Force combatants and advisers to Syria.

There are many suspicions in the region that a "grand bargain" between the United States and Iran is still in the cards, and that if a nuclear deal can be reached, U.S. resistance to other aspects of Iranian conduct would be softened just when sanctions relief would be giving Iran more economic resources. These fears should loudly be laid to rest. The Obama administration should clarify that it seeks a nuclear deal with Iran, but has no illusions about or intentions to negotiate a broad rapprochement with the Islamic Republic, and will help those nations that are resisting Iranian misconduct.