As the Russian landscape burns and Eurasia’s agricultural zone sizzles in a record heat wave, the agricultural commodities markets are threatening to spawn a food crisis akin to the one in 2008. Mixed signals regarding the size of the global wheat supply and the likely impact of Russian Premier Vladimir Putin’s August 4 decision to halt all exports of the grain from Russia for the rest of 2010 are leading to concerns that price inflation in the wheat market could usher another food crisis. The shortage in 2008 left hundreds of millions of people worldwide unable to afford basic foodstuffs, aggravating the overall impact of the later global financial crisis upon poor countries.

More From Our Experts
Alice C. Hill
What COP26 Did and Didn’t Accomplish

A key lesson of 2008 is that volatile global financial markets can result in food commodity price speculation that has dire consequences for the world’s poorest. The inflationary trend that slammed poor countries in early 2008 began with a slow but steady rise in commodity trading prices in early 2007. By the summer of 2007, the overall volume of trading on the U.S. food commodities markets had skyrocketed to record levels, signaling that large investors recognized weaknesses in the stock and real estate markets and were seeking safer havens. The result was a phenomenal escalation, not only in the volume of food commodity investment, but also in trading prices.

The extraordinary commodity inflation led to rice hoarding in Asia, with key producer nations refusing export to poorer, rice-needy neighbor states. By March 2008, even the middle class residents of Manila were rioting in the streets for rice and basic foodstuffs.

The commodity markets eventually settled down, in large part because the overall financial crisis of 2008 overtook the impact of specific agricultural pricings. But the costs of basic foods never did return to pre-2007 levels, and poor countries remain hard hit well into 2010.

More From Our Experts
Alice C. Hill
What COP26 Did and Didn’t Accomplish 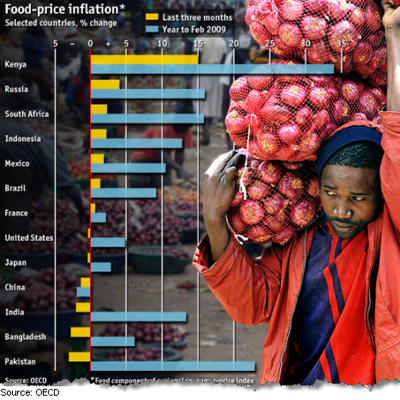 By May 2008, the World Bank was estimating that 100 million people had been pushed into subsistence poverty due to food inflation in the first quarter of that year. The bank signaled in the final quarter of 2008 that another two hundred to three hundred million people were pushed backwards into dire poverty by the world financial crisis.

So what will this latest round of wheat and grains inflation mean?

By the time Putin banned all Russian wheat, corn, barley, rye, and flour exports, the country had been experiencing the worst heat wave in recorded history. From Kazakhstan to the north of Siberia, a desperate drought has gripped the region for months, causing the most severe water shortages in 130 years. And wildfires have burned vast tracts of forests and agricultural zones for the last two weeks. The U.S. National Oceanic and Atmospheric Administration reported that satellite imagery revealed that 948 forest fires, covering 26,000 hectares, were burning across Russia at the end of July.

According to Putin’s August 4 speech, one-fifth of Russia’s wheat crop has been destroyed, and more than a third of the country’s arable land has been rendered useless, either by fire or drought. Other major wheat producers in the region, including Ukraine, report similar scales of drought-induced losses. Putin says Russia’s wheat export ban will remain in effect until at least the end of 2010.

There are many wheat-producing nations, including the United States, and no inherent reason why even a 100 percent devastation of Russia’s crop need result in a global grains shortage. But Canada is also experiencing drought-induced shortages this year, and epidemics of wheat rust and the fungal disease dwarf bunt have damaged crops across much of northern Europe.

Though the UN Food and Agriculture Organization (FAO) and U.S. agricultural officials have tried to calm market fears, repeatedly stating that wheat harvests in Latin America and the United States will be strong in 2010, commodity trading in wheat and other grains has, ominously, followed the 2007-2008 trend.

In June, before this latest round of inflation commenced, the FAO and OECD jointly issued a grim forecast of food prices for the coming decade. Thanks to a combination of scarcities, energy costs, and rising middle class demand for diverse diets, the report forecast steady global increases in cereal, grain, oil, and dairy prices for the next decade, with the net impact being an up to 40 percent increase over 2007 levels. Several wealthier, import-dependent countries such as Saudi Arabia and China have been buying up arable land in poorer African and Asian nations, as a hedge against future food shortages.

The prescient FAO/OECD report warned in June that "if history is any guide, further episodes of strong price fluctuations cannot be ruled out, nor can future short-lived crises."

Bad Time to Be Poor

The overwrought phrase "food security" connotes literally obtaining sufficient calories and nutrients to stay alive. At this moment--before the impact of rising grain prices is felt--millions of people are already experiencing a food security crisis in Chad, Sudan, Niger, and Mauritania, according to NGOs Save the Children and Médecins Sans Frontiers. Some five million people in the region face starvation.

USAID is trying to move quickly to close food security gaps in Rwanda, Democratic Republic of the Congo, Kenya, Malawi, Sudan, and Uganda, providing support for agricultural production in those countries. But the effort is a race against the food inflation clock, as crops planted today may not reach markets in time to offset the impact of inflated imports.

Last week, the cost of a loaf of bread in Johannesburg jumped 20 percent in just a few days.

"This is the fastest wheat price rally we have seen since 1972-73," Gary Sharkey, head of wheat procurement at UK-based Premier Foods, which makes the popular Hovis brand of bread, told the Financial Times. "The industry will be unable to ignore a 50 percent rise in wheat prices."

Across the wealthy world, food production companies are locking down futures of flour and wheat, hedging against possible shortages or further inflation. This is, in turn, locking commodity prices at new-high levels. Piantedosi Baking Company of Boston, pizza giants Papa John’s and Domino’s, and a large range of processed foods makers have already locked in.

Can a Crisis Be Averted--This Time?

The day after Putin put the kibosh on Russian grain exports, U.S. wheat producers flooded the futures markets with rosy forecasts that brought trading prices down somewhat. Jacques Diouf, director-general of the FAO, has been holding round-the-clock press briefings in an effort to calm the markets. Even with the Russian catastrophe, Diouf says, global grain production in 2010 is about 100 million tons above the 2007-2008 nadir. If no further weather or disease perils strike major crops in the world, he says, there should be plentiful wheat, corn, rice, rye, and soy harvests this year.

But markets are often irrational. It is widely expected that Ukraine and Kazakhstan will follow Russia’s lead, banning export of their meager grain harvests. This could spark another round of price speculation. It is widely rumored that India, Switzerland, France, and other European nations have begun hoarding a variety of basic grains, in anticipation of further inflation. If true, that could further drive up market prices. Investment analysts are all over the place in their current forecasts, predicting everything from a 180 degree turnaround in food prices before the end of the year, to absolute doom.

See How Much You Know About Secession and Independence Movements

Test your knowledge of secession and independence movements, from the struggles of the Iraqi Kurds to the battle for Northern Ireland.

See How Much You Know About Maritime Policy and Disputes

Test your knowledge of maritime policy and disputes, from the Arctic to the South China Sea.

Michael Krepon, cofounder of and distinguished fellow at the Stimson Center, sits down with James M. Lindsay to discuss the rise, demise, and possible revival of arms control efforts across the globe.