Leaders of the European Union’s twenty-eight member states are scheduled to meet on August 30 in Brussels to pick the successor to foreign policy chief Catherine Ashton, whose term expires in October. For the German Marshall Fund’s Sir Michael Leigh, the appointment of a high representative comes at a crucial time as ongoing conflicts in Ukraine, Iraq, Syria, and Libya threaten to undermine European security and economic interests. "This is a moment of truth when the member states of the EU have to decide whether they are ready to act together in tackling these unprecedented threats," he says. Leigh adds that "the success or failure of a common EU foreign and security policy will be determined in our own neighborhood," and believes that the next foreign policy chief should recalibrate the bloc’s policies toward neighboring states in the east and south. 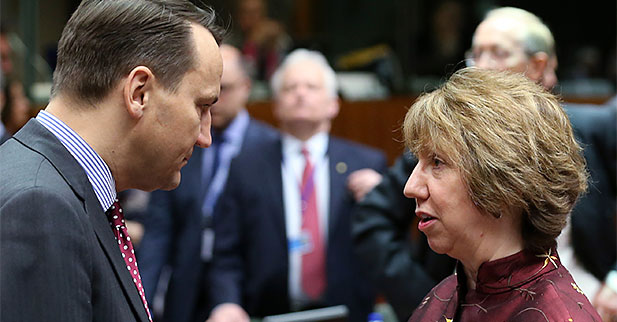 Given the ongoing crisis in Ukraine, as well as the growing instability in the Middle East, do you think the new EU high representative for foreign affairs will have a stronger mandate to set a common foreign and security policy agenda for member states?

More From Our Experts
Thomas Graham
After Geneva Summit, Daunting Diplomacy Ahead for U.S. and Russia
Stephen Sestanovich
What to Watch for at the Biden-Putin Summit
Charles A. Kupchan
Biden’s Foreign Policy Needs a Course Correction

Europe is now confronted with a number of clear and present threats to its own security. The shooting down of MH17, with a couple of hundred European citizens onboard, as well as the increasing number of European "jihadists" trained in Afghanistan, Syria, Iraq, and Libya are chilling examples. The EU is faced with the flaunting of the principles on which it—and the broader liberal international order—is based in Crimea and eastern Ukraine.

This is a moment of truth when the member states of the EU have to decide whether they are ready to act together in tackling these unprecedented threats. If so, they will appoint a foreign policy chief who is convincing and experienced, somebody who will take the initiative and bring together their foreign ministries, their policy planning teams, national diplomats, and EU officials to define together European interests, objectives, and goals and to come up with proposals for joint action. This is what ought to happen.

Now, the other question is what is likely to happen. Despite the unparalleled dangers we face on several fronts, it looks as though the member states are pursuing a traditional approach to this appointment. The governments of the larger member states seem to prefer to act alone, or in temporary coalitions, rather than to empower the EU foreign policy chief.

If this is indeed the case, then they will follow their usual approach, focusing more on a potential nominee’s gender, political orientation, and national origin than on diplomatic experience and political weight.

More From Our Experts
Thomas Graham
After Geneva Summit, Daunting Diplomacy Ahead for U.S. and Russia
Stephen Sestanovich
What to Watch for at the Biden-Putin Summit
Charles A. Kupchan
Biden’s Foreign Policy Needs a Course Correction

By many accounts, Italian foreign minister Federica Mogherini and Polish foreign minister Radek Sikorski are the leading candidates for the post. Some experts say that Mogherini is too soft on Russia, while Sikorski is seen as being perhaps too critical. Is there an odds-on favorite or is this an open race?

I don’t wish to comment on individuals. If the member states are serious about developing effective common action at the European level they will eschew the usual politicking and go for one of the most experienced of the present foreign or prime ministers in the member states. This would give the Russian or Iranian foreign ministers, for example, something to think about. It would provide a real European counterpart for Secretary of State [John] Kerry.

The member states decided not to create a foreign minister role for the EU but rather a high representative. In itself, this is fair enough; the EU is not a state as such. But the concern is now that they may not even want a representative but rather a coordinator. Of course the high rep must be a good coordinator but this is not sufficient. The person in this role must also be ready to take the initiative, to propose solutions, and to build coalitions to support them.

How much of a security risk do European jihadists pose to member states?

The risk to Europe itself from European jihadists who have gained experience and training in Afghanistan, Syria, Iraq, and Libya is increasing every day. There is a real risk that battle-hardened jihadists will return to Europe planning to stage terrorist attacks in their countries of origin.

This is the kind of risk that a proper policy planning process run by the high representative would identify before it materializes with a view to common preventive action.

If we go back to 2003, the then-high representative Javier Solana identified terrorism and state failure as among the main risks facing Europe. It’s time we updated our security strategy to tackle the specific threats we’re facing today. This should not be a paper exercise but a genuine commitment to preventive action.

Does the threat of foreign-trained jihadists undermine larger efforts to build relationships with states in the EU’s immediate neighborhood?

Countries in Eastern Europe, North Africa, and the Levant are pressing the EU for a more open policy on visits by their business people, students and other legitimate travelers as a token of our seriousness in developing closer links with them. These people now face burdensome visa requirements before they can come to the EU. However the prolonged economic downturn has spawned anti-immigration and anti-EU political parties in many member states. They did well in June’s European Parliament election. The jihadist threat comes on top of a wave of economically induced xenophobia that does not make it easier to open our borders to neighboring countries. This is an issue the new EU leadership will need to tackle.

You mention strengthening links with countries to the east and west. Does the European Neighborhood Policy (ENP) need to be retooled?

"The success or failure of a common EU foreign and security policy will be determined in our own neighborhood. This is the part of the world where the EU is best placed to exercise its influence."

The success or failure of a common EU foreign and security policy will be determined in our own neighborhood. This is the part of the world where the EU is best placed to exercise its influence.

The ENP was devised in anticipation of the EU’s expansion in 2004 when ten additional countries became EU members. It was meant to deliver a message to other nearby countries that Europe would not become a fortress; the EU offered closer links with countries to the east and the south in exchange for their adoption of pro-democracy and pro-market reforms.

But over the last ten years we have found that the EU has little leverage to obtain such reforms without an offer of membership. You can tell people what to do if you let them join your club but not if you keep them outside.

In North Africa and the Levant today, the desire to emulate European values and standards is not always a top priority, to put it mildly. Other influences are afoot in countries both to the south and to the east. Religion and archaic visions of national unity are vying for attention with our own more liberal world view. We cannot take for granted that most of our neighbors necessarily want to become more like ourselves.

We need a much more strategic approach in the future. It is not enough to yearn for good neighbors. We must be clear-sighted and realistic about what we are ready to offer them and what we expect in return. We need a better sense of our objectives and how far we are prepared to go achieve them.

We must also pay more attention to the neighbors of the neighbors. What is happening in the Sudan, Somalia, Chad, Niger, and Mali, affects Egypt, Libya, Algeria, Tunisia, and Morocco.

Syria, Lebanon, and Jordan, which are covered by the neighborhood policy, are affected by developments in Iraq and Iran, which are not. Obviously, our engagement with Ukraine is strongly influenced by Russia’s position.

It is the job of the high rep to bring more overall coherence to the EU’s approach and then to mobilize the EU’s different policy tools in support of our objectives. This means working closely together with the European Commission (of which the High Rep is also Vice-President) and with the member states.

It makes sense to give priority to relations with our immediate neighbors. But at the same time we should be in regular dialogue, formal and informal, with Russia, the Gulf States, Turkey, Israel and, indeed, the United States about areas where we have overlapping interests.

The EU’s new foreign policy chief should make it a top priority to review this policy and to come up with realistic and coherent proposals.

You recently wrote that the next high rep "should keep the political spotlight" on TTIP negotiations. Beyond economic growth, what are some of the geostrategic reasons for cementing the EU-U.S. trade deal?

"The Ukraine/Russia crisis has brought Europe and the United States closer together... It remains the deepest strategic, political, and economic relationship in the world."

The Ukraine/Russia crisis has brought Europe and the United States closer together. But our relationship is about more than crisis management, when common principles are under fire. It remains the deepest strategic, political, and economic relationship in the world.

The prolonged economic downturn has shaken public confidence on both sides of the Atlantic. TTIP is the only major project on the horizon that could give a real boost to growth and jobs on both sides of the Atlantic in the medium-term. It faces many obstacles in Europe and the United States, but negotiated solutions can be found to most of the difficult issues if the political will is there.

That’s why it should not be left to the trade negotiators, however senior and competent they may be. Political leaders need to explain to their constituents why TTIP is so important. So far they’ve been reluctant to put the spotlight on TTIP for fear that it may fail.

There’s a real job for the high rep to raise the discussion of TTIP to the political level in Europe, without shying away from the difficulties.

Together with neighborhood policy, and energy security, TTIP should be one of the new high rep’s top priorities.

The alliance is bringing its twenty-year mission in Afghanistan to a close in 2021, as it looks to bolster its military deterrent in Europe and provide security assistance in the Middle East and Horn of Africa.

Backgrounder by Jonathan Masters May 6, 2021

Restrictions related to the COVID-19 pandemic have increased threats to press freedom in the region, raising questions over how to respond.

Armenia’s Postwar Crisis: What to Know

Armenia has been riven by disputes over its leadership since its military defeat by Azerbaijan last fall. Newly called elections are unlikely to reconcile the divisions in Armenian society caused by the battlefield losses.