The United States is both the world’s largest foreign direct investor and the largest beneficiary of foreign direct investment (FDI). But like every sovereign country, it has sought to temper its embrace of open markets with the protection of its national security interests. Achieving this balance, which has shifted over time, has meant placing certain limitations on overseas investment in strategically sensitive sectors of the U.S. economy.

Established in 1975, the Committee on Foreign Investment in the United States (CFIUS) is a powerful interagency panel that screens foreign transactions with U.S. firms for potential security risks. Lawmakers have expanded the committee’s powers a number of times over the years, most recently in 2018, amid a rising tide of Chinese investment. Meanwhile, other Western countries, from Australia to the United Kingdom, are tightening scrutiny of foreign investments.

How does the United States benefit from foreign investment?

Washington has traditionally led international efforts to bring down barriers to cross-border capital flows with the goals of expanding investment opportunities for U.S. multinational businesses and creating a more stable and efficient international system. The United States relies greatly on foreign inflows to compensate for a shortage of savings at home, and it routinely ranks among the most favorable destinations for foreign direct investors. Foreign direct investment—the ownership or control by a foreign entity of 10 percent or more of a domestic enterprise—plays a significant and growing role in the U.S. economy.

According to research by the Department of Commerce, foreign investment accounts for some twelve million U.S. jobs, or 8.5 percent of the total labor force. On average, foreign firms pay higher salaries than their domestic competitors; they are also disproportionately involved in manufacturing.

What are the concerns over foreign investment?

Concerns with foreign transactions are typically associated with mergers, acquisitions, and takeovers of domestic firms rather than new investments, known as greenfields. U.S. lawmakers, much like their peers around the globe, have passed legislation that restricts or authorizes reviews of foreign deals that could cause significant outsourcing of jobs, the sharing of sensitive technologies, or impairment of critical infrastructure.

But many economists warn that imposing burdensome restrictions on FDI inflows could inspire retaliatory policies by other nations. To avoid this, the thirty-four members of the Organization for Economic Cooperation and Development (OECD), as well as twelve nonmember states, have signed a nonbinding commitment to treat foreign-controlled firms on their territories no less favorably than domestic enterprises. Governments under this agreement are, however, provided considerable latitude to exempt sectors of their economies deemed essential to national security. As shown in Table 1, countries define “critical infrastructure” in various ways [PDF]. 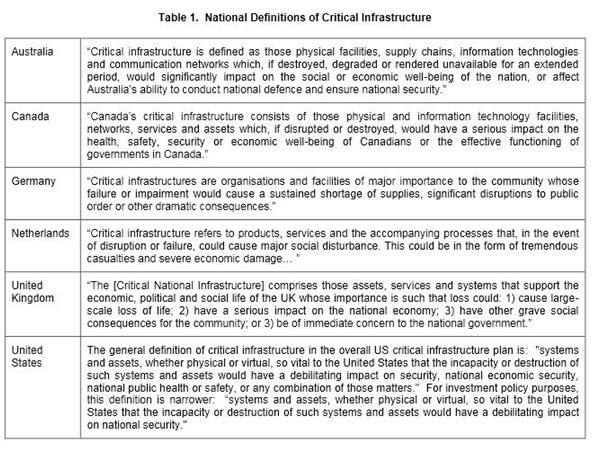 International investment experts Alan P. Larson and David M. Marchick, who coauthored a 2006 Council Special Report on the subject, say that state ownership of multinational firms is often benign. However, they note that concerns arise “when the foreign company’s decisions become an extension of the government’s policy decisions rather than the company’s commercial interests.” The authors cite as a cautionary example a move by Russian energy giant Gazprom in 2006 to cut gas supplies to Ukraine, which some Western observers considered a politically motivated decision.

More recently, leaders in Europe and the United States have raised concerns about investments by large Chinese firms. The Trump administration’s inaugural National Security Strategy warned that the “national innovation base” should be protected from Beijing’s attempts to gain control of critical companies and technologies.

How has the review of foreign investment evolved?

Federal oversight of foreign investment has evolved over time, often in response to changing economic and security conditions. President Gerald Ford created CFIUS in 1975 amid growing investments by members of the Organization of the Petroleum Exporting Countries, or OPEC, in the United States, which many policymakers saw as potentially suspect.

However, in the ensuing years, many in Washington felt the oversight body was falling short of its obligations. In 1988, Congress strengthened the CFIUS review process by passing the Exon-Florio amendment to the Defense Production Act of 1950. Much as in the previous decade, the reform stemmed from concern with growing foreign investment—this time Japanese—in sensitive U.S. industries, including a bid by computer giant Fujitsu to purchase U.S.-based computer chipmaker Fairchild Semiconductor.

The CFIUS process was amended again by the Foreign Investment and National Security Act of 2007 (FINSA), which passed in the wake of the Dubai Ports World scandal. In March 2006, amid a flurry of U.S. political opposition, the Dubai-based, state-owned firm scuttled its bid to acquire control of major U.S. port operations. Many in Congress said that the controversial deal would increase the risk of a terrorist attack on the United States. President George W. Bush and CFIUS had previously approved the transaction. FINSA provided Congress greater oversight of CFIUS, expanded the legal meaning of “national security” to include critical infrastructure, and required CFIUS to investigate all foreign investment deals in which the overseas entity is owned or controlled by a foreign power.

Lawmakers and security officials have become increasingly concerned about the growth of Chinese investments in U.S. companies, which have totaled more than $100 billion over the past five years. The Trump administration has decried the Made in China 2025 industrial policy, in which Beijing plans to leverage Chinese investment in foreign technology firms to quickly develop China’s own high-tech manufacturing sector. In 2018, U.S. intelligence agencies said that China’s targeted acquisitions of U.S. firms constitute an “unprecedented threat” to the United States.

In response, CFIUS has expanded its efforts. In 2016, the agency broadened its review process to apply more oversight to so-called non-notified transactions—that is, deals that had not been registered with the agency.

In 2018, Congress passed—and President Donald J. Trump signed—the Foreign Investment Risk Review Modernization Act (FIRRMA), which many experts say is the most significant overhaul of the agency’s powers since 1988. FIRRMA allows CFIUS to review a wider range of transactions, including any “non-passive” investment in U.S. firms involved in critical technology or other sensitive sectors. It also lengthens the review period, gives CFIUS greater leeway to suspend transactions, increases funding and staffing for the agency, and mandates a separate process to review the export of sensitive U.S. technologies.

While the legislation does not target China by name, one of its authors, Republican Senator John Cornyn, said that “China has weaponized investment in an attempt to vacuum up our advanced technologies.” Skeptics of the reforms, however, say that they could overburden CFIUS, hamper the competitiveness of U.S. companies, and dampen the dynamism of the technology sector.

How does the CFIUS review process work?

CFIUS operates under the discretion of the president and is chaired by the secretary of the Treasury. It includes the heads of the following departments: Commerce, Defense, Energy, Homeland Security, Justice, and State, as well as the U.S. trade representative and director of the Office of Science and Technology Policy. Several other offices also contribute: the Council of Economic Advisers, Homeland Security Council, National Economic Council, National Security Council, and Office of Management and Budget. In addition, the director of national intelligence and the secretary of labor are nonvoting, or ex officio, members.

Before FIRRMA, CFIUS reviewed every merger, acquisition, or takeover resulting in “foreign control of any person engaged in interstate commerce in the United States.” FIRRMA expanded this to include noncontrolling investments.

Prior to a formal, voluntary filing, the committee encourages parties to a foreign deal that may have security implications to consult with CFIUS staff confidentially to identify and address potential concerns. Once a formal notification is submitted, CFIUS reviews the proposed deal for up to thirty days, during which time it can request additional information and provide feedback to the parties. Most reviews conclude in the initial period; the few that raise concerns trigger a second, forty-five-day investigation. CFIUS and the transacting parties may negotiate a mitigation agreement to address any national security concerns. After the investigation period, the committee may make an adverse recommendation to the president, who then has fifteen days to make a decision. FIRRMA, which has not yet been fully implemented, will expand the initial review period to forty-five days and also require mandatory filings in some instances.

In the wake of the global financial crisis, the number of companies filing transactions with CFIUS has steadily risen, from 65 in 2009 to 240 in 2017. About 40 percent of filings have led to an investigation.

Since the creation of CFIUS, presidents have only blocked deals on five occasions. In 1990, President George H.W. Bush was the first to do so, voiding the sale of Mamco Manufacturing, a Seattle-based aircraft parts maker, to a Chinese state-owned aviation company. President Barack Obama blocked two: in 2012, he ordered the Chinese-owned Ralls Corporation to divest its interest in Oregon wind farms, citing national security concerns, and, in 2016, he blocked the takeover of the German semiconductor company Aixtron by a Chinese company with government ties.

Trump has accelerated the pace, stopping two potential transactions during his time in office. In September 2017, he blocked the sale of the chipmaker Lattice Semiconductor in a deal partially financed by Chinese state-owned capital. And in March 2018, Trump acted quickly on CFIUS warnings that the proposed takeover of U.S. telecom leader Qualcomm by a Singapore-based company would reduce U.S. technological competitiveness and impair national security. The $142 billion deal was by far the largest to be blocked by presidential order.

How do U.S. policies on foreign investment compare with the rest of the world?

In recent years, countries around the world have been reevaluating, and often tightening, their oversight regimes. Most have broadened the scope of what is considered “national security sensitive” to include energy, telecommunications, infrastructure, and health care. 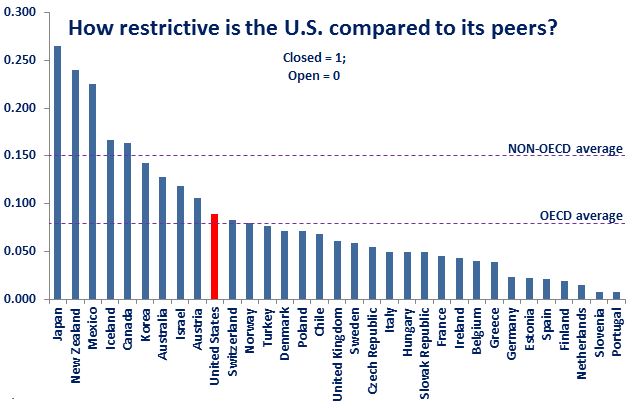 As in the United States, other governments have raised concerns over record levels of Chinese acquisition activity. The Financial Times reported that nearly $40 billion worth of Chinese foreign acquisition deals in Australia, Europe, and the United States were scuttled in 2015 and 2016 because of either outright rejection or increased regulatory scrutiny.

Recent Chinese acquisition attempts have proven particularly controversial in Australia. The government has stepped up its scrutiny of foreign deals and mandated that all acquisitions of public infrastructure be reviewed. In 2016, Canberra rejected a Chinese bid to buy the country’s largest agribusiness and then blocked a Chinese consortium from buying an electricity grid operator.

Several European countries have followed suit. In 2014, France began requiring state approval for most foreign bids. Germany, China’s top investment destination in Europe, which saw controversy over Chinese investments in traditional German powerhouses such as automaker Daimler, stepped up its efforts to review and block foreign deals in 2018. Meanwhile, in the United Kingdom, the government of Prime Minister Theresa May proposed dramatically increasing regulators’ authority to review foreign deals.

International law firm Akin Gump lays out the changes to CFIUS in the FIRRMA legislation.

This 2018 report from the Congressional Research Service examines CFIUS [PDF].

The Pew Research Center details the efforts of local and state governments to attract foreign investment.

CFIUS is reviewing a growing number of transactions, according to this 2016 brief [PDF] by the law firm Skadden, Arps, Slate, Meagher & Flom.

This 2006 Council Special Report discusses the benefits of FDI in the United States and the security risks posed by foreign ownership of certain U.S. assets.